New Hampshire gets a ‘B’ on Manufacturing Scorecard

Grade is higher than any other Northeast state

The state of New Hampshire received mixed results on the 2019 Manufacturing Scorecard compiled by Ball State University in Indiana. 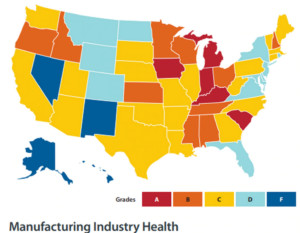 But the good news is that the Granite State’s overall score was better, in some cases significantly better, than any other state in the Northeast.

Overall, the state received a grade of B for “manufacturing health,” a grade that is based on such factors as the quality and availability of the labor force, transportation infrastructure, non-wage labor costs, access to innovative technologies and the cost of doing business. In 2018, the state was given a grade of B-.

But drilling down, there were some areas where there is certainly room for improvement.

Topping that list is “logistics industry health,” which considers the ability of manufacturers to move, store and distribute manufactured goods. Once again – for the 10th year in a row – the state was given an F grade in that category.

The state received a C- in the “sector diversification” category, which measures how well diversified a state’s manufacturing sector is. The bright side is that last year’s grade was D+.

The state also received a C- in the “expected liability gap” category, which looks at the fiscal health of a state’s retirement system through the amount of unfunded liabilities, which the study says are a good indicator of the direction of future taxes and public services. Last year’s grade was D+.

Other grades included a B+ for “human capital” (the quality of the workforce) – which the study considers the most important factor used by manufacturers in determining where to locate.

Also, the state got a C in “worker benefit costs,” a C- for its tax climate (down from last year’s C), a B for the level of international trade manufacturers engage in (the same grade as 2018) and a B+ for “productivity and innovation,” which considers access to university laboratories and nonprofit research activities.

As for its neighbors, four of the five other New England states each received overall grades of C for their manufacturing health, with Rhode Island receiving a D.

In fact, geographically, the closest state to New Hampshire with a grade of B or better is Ohio, which also received a B.

The states receiving A grades were Indiana, Iowa, Kentucky, Michigan and South Carolina.