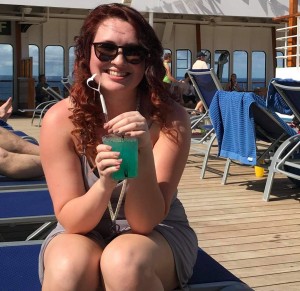 Trisha Boucher enjoys a drink in the pool area on a Carnival Cruise in 2018. (Courtesy photo)

Two weeks before their April 2020 cruise, Stephanie Boucher and her daughter Trisha Boucher found out the inevitable – the trip was canceled.

The cruise was Nursecon at Sea, a nurses’ conference slated to take place over five days aboard a Royal Caribbean trip to the Bahamas. The cancellation wasn’t totally out of the blue as a no-sail order had been in effect since the middle of March as Covid-19 was docking ships from coast to coast.

As nurses, Stephanie, of Nottingham, and Trisha, of Manchester, understand the seriousness of the virus and will not rush back to take a cruise.

“I’ll probably take all of next year off from cruising,” Stephanie Boucher said. “I’ll probably feel comfortable in 2022 after this thing hopefully blows through.”

The industry took major hits right from the onset of the pandemic. Outbreaks on ships were discovered early in the pandemic and news stories depicted the industry’s giants as petri dishes during pandemics.

Despite the bad publicity, New Hampshire travel agents and cruise enthusiasts say that coronavirus won’t be fatal to the industry.

In fact, Kim Terrio of Penny Pitou Travel, which has offices in North Conway and Laconia, insists the industry “will come back.”

“Travelers I know want to get back, said Terrio. “For some people, it is for their own mental health. How long it will take to get back (to pre-Covid) is the question. I’d say to get back where we were in February may take two to three years.”

Currently the Centers for Disease Control and Prevention’s no-sail order extends through Oct. 31

“I think we’ll lose (some clients), but diehard cruisers will cruise again and (many) want to get back on ships now,” said Bill Walsh, owner of Cruise Travel Outlet in Salem. “Many feel safe, however, and know cruise lines are going way overboard in terms of making sure it is a safe environment.”

Some New Hampshire residents are looking forward to a cruise after navigating the stressors of 2020, said Walsh.

“A lot of people are not spending money (during the pandemic), and they are saying they now deserve a cruise,” he said. “I think we will see a lot of first-time cruisers take the place of those who are not comfortable cruising.”

According to a Cruise Lines International Association poll taken in August, 77% of respondents plan to cruise in the next two years – a figure that’s only 1% lower than a similar poll taken in December 2019, before coronavirus was a pandemic.

Still, Jane Broderick of Windham isn’t pushing for an early return to cruising. She, along with her husband Michael, have enjoyed up to four cruises a year during more than 40 years of vacationing on the seas. But after seeing what has happened the past seven months they know it will be some time before they meet up with friends on the high seas.

“I’m not ready to jump back on a ship until Covid is under control, really under control,” Broderick said. “I’ve been saying that there is no way I am going to sail having to wear a mask. Until it is entirely over and there is a vaccine I don’t feel comfortable going back to cruising. I will go back when everything is clear. The crew takes care of you on the ship, but you can’t trust other people (on the ship) to be good.”

The Brodericks were on a cruise when the first No Sail Order came down. Passengers were only allowed on two of the scheduled five island stops because the countries closed their borders.

“We were thinking (Covid-19) would last a couple weeks, and it would be all over and done and then we could continue cruising,” said Broderick, who has canceled three additional 2020 trips. “We’ve been missing out on cruising a lot.”

Like Broderick, Lisa Fitzgerald of Fitzgerald Travel in Spofford, also thought coronavirus would be a quick blip and the industry would be back in no time.

“I was one of those people who said to stop worrying, it’s the flu, it will blow over,” said Fitzgerald. “I truly believed that until probably the first week in April when I followed a website that showed every death per minute. I was watching it like a bad series on Netflix. That’s when I knew this was bad and it wasn’t changing.”

For almost a decade, Walsh had been hoping to create a new brand that focuses on smaller ships, like river cruises or ones with different itineraries. The pandemic has presented the perfect opportunity. While losing up to 80% of his business in 2020 compared to this time in 2019 is never a good thing, he believes the timing is right.

“I think people will be more comfortable on small ships, so the timing will be good for us,” said Walsh. He said the small-ship sector “has been trending up. Our company has been trending more to luxury and most those higher end products.”

Fitzgerald has been keeping busy staying in touch with her clients, initially with weekly calls that have changed to monthly. She updates them on important news and developments like how to get credit for lost vacations, cruise line news, and what countries are opening up to ships.

“The calls make them feel important and puts their trust in the industry,” said Fitzgerald. “Then when it’s the right time (for them to return) they are ready to go.”

“When it started to settle down and the storm cleared up we had to think of different avenues to stay in front of our clients. Someone in my group discovered Zoom and we all jumped on that bandwagon. We had to be creative to (stand out).”

No matter when ships are able to set sail, cruise-goers can expect a different experience than what they’re used to. Buffets, pool areas and casinos are just a few of the spots on the boat that may be altered, according to Royal Caribbean. Mask requirements and pre-boarding Covid tests should also be expected.

“People will hopefully feel more comfortable and start booking (with new requirements),” Boucher said. “With Covid, they will have social distancing. Hand sanitizing and cleaning efforts will be more detailed than before. They had already done a great job as it is.”

This article is are being shared by partners in The Granite State News Collaborative. For more information, visit collaborativenh.org.