$14.4 million anaerobic digestion plant is a first for multinational manufacturer 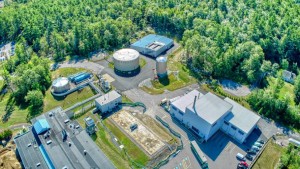 MilliporeSigma, a manufacturer of equipment for the biopharmaceutical industry, has taken a step forward in limiting its environmental impact with the opening of a new $14.4 million industrial water treatment plant at its Jaffrey facility.

The plant – which has been in operation since April but had an official ribbon-cutting ceremony on Tuesday – is the first of MilliporeSigma’s facilities worldwide to use anaerobic digestion, which allows bacteria to break down the biodegradable waste in the absence of oxygen. The byproduct of the process is methane, which the company said it will use to help generate heat and offset energy costs.

Water from the on-site treatment plant will then feed into the town’s wastewater facility, where it receives final treatment.

The company said that measurements taken of the pre-treated water are “well below industrial discharge permit limits, thereby assisting the town in its discharge compliance.” It added that it is “evaluating the possibility of reusing the treated process water in its Jaffrey production operations, which would be a first in New Hampshire.”

The new water treatment plant is one of about 30 initiatives put in place at the facility’s that are aimed at reducing its environmental impact.

Since 2012, the MilliporeSigma said, there have been compressor and motor upgrades and installation of high-efficiency HVAC units, lighting controls and window replacements.

In addition, the site also recycles plastic and corrugated packaging, recovers and reuses solvents and uses double-sided printing — leading to a recycling rate of 40 percent, according to MilliporeSigma.