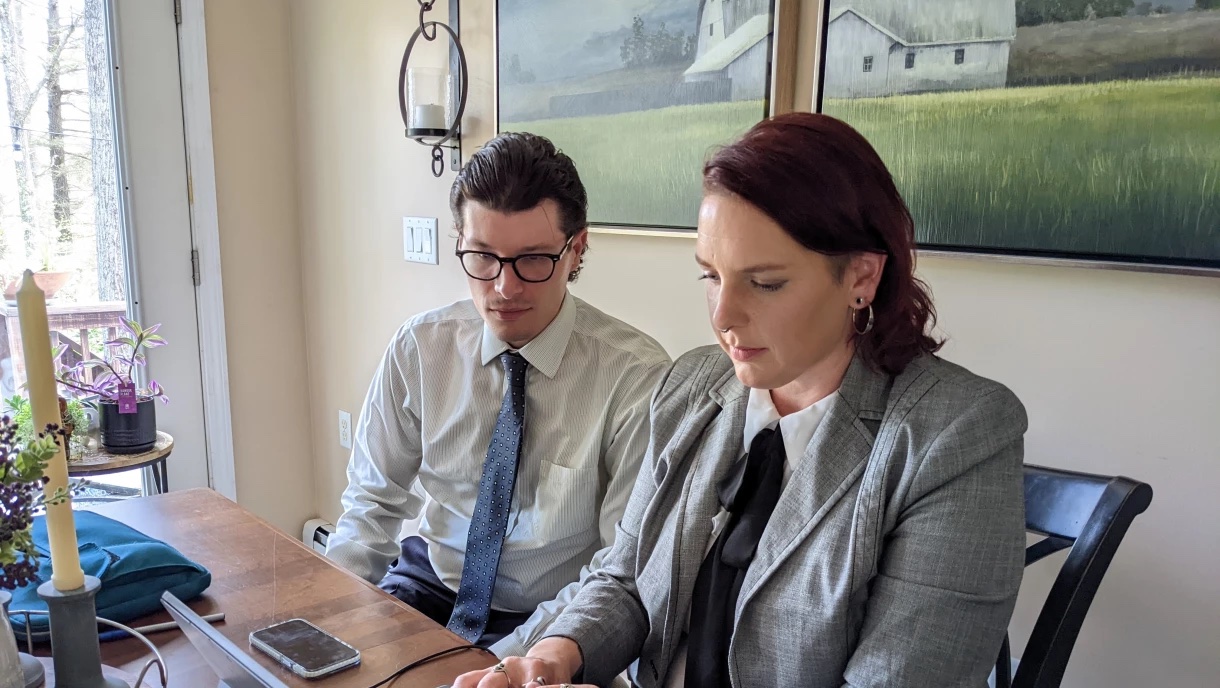 Lawyers for a man found guilty of participating in the 1988 murder of a pregnant Bow woman are working to clear his name and free him from prison after three decades, saying he is innocent and his conviction rested on a false confession.

If successful, the effort to challenge Jason E. Carroll’s conviction could make legal history in New Hampshire. There are no known instances in the state of someone being exonerated after a murder conviction.

Carroll, now 52, was convicted in 1992 of second-degree murder and conspiracy to commit murder in the killing of Sharon Johnson, 36, who was found stabbed and strangled in a Bedford construction site four years earlier. Carroll was sentenced to 46 years to life in state prison.

On Wednesday, Carroll’s lawyers filed a motion to suspend the remainder of his minimum sentence, a request allowed under state law which, if granted, would allow him to seek an early parole hearing. The motion doesn’t hinge on proving Carroll’s innocence, which his attorneys at the New England Innocence Project say they plan to pursue through separate legal channels.

“It’s been 33 years. I’m nervous,” Carroll said in a statement provided by an attorney. “But after 30 years and with all the criminal justice reform across the country, I hope it will open people’s eyes about what’s going on with our legal injustice system.”

Across the country, more than 1,000 people found guilty of murder have been exonerated since 1989. More than 250 of those cases involved false confessions.

Asked about the case earlier this week, before the motion was filed, a spokesperson for the NH Department of Justice declined to comment on Carroll’s request for early parole or his claim of innocence.

“If and when we receive a pleading from the defendant we will file a response addressing the issues he raises in that pleading,” Michael Garrity, the spokesperson, said in an email.

More than a year after Johnson’s killing, police arrested her husband, Ken Johnson, along with Carroll and an acquaintance named Tony Pfaff. The state alleged Ken Johnson paid Carroll and Pfaff, both of whom were 18 at the time, to murder his wife as he looked on.

With no physical evidence connecting any of the suspects to the murder, the prosecution’s case hinged on confessions by Carroll and Pfaff. Both later recanted, saying their statements were coerced by detectives and were fictions, based on information provided by police during hours of interrogation.

In the end, only Carroll was convicted. The charges against Ken Johnson were dropped, and a jury acquitted Pfaff.

Cynthia Mousseau, one of Carroll’s attorneys at the New England Innocence Project, said he caved under aggressive questioning by police — including his own mother, then a Bedford police officer — and told them what they wanted to hear.

“Jason sort of adopts the narrative that the cops are feeding him, which is that he was a participant in this murder of this woman,” she said. “And that’s essentially the only evidence that connects him to this case.”

Sharon Johnson’s daughter, Melonie Sue Eaton, said she remains convinced of Carroll’s guilt and opposes his release from prison. Only 14 at the time of her mother’s murder, she said the loss devastated her.

“What they did destroyed so many people’s lives,” she said.

The motion Carroll’s attorneys filed Wednesday mentions his claim of innocence, but doesn’t base its argument on it. His lawyers are arguing that his good behavior behind bars, strong family ties, plans for post-release employment and the length of time he has already served make him an “ideal candidate” for early parole.

“Jason has shown that he is ready to begin to live his life beyond the walls,” his lawyers wrote.

Mousseau said their first goal is getting Carroll out of prison as soon as possible, then — whether or not that succeeds — seeking to clear his name. Those efforts are still in the early stages, but could include a motion to test physical evidence for DNA and a habeas corpus petition arguing for Carroll’s innocence.

A post-conviction exoneration in a murder case would be a first for New Hampshire. Across the country, more than 1,000 people found guilty of murder have been exonerated since 1989, according to the National Registry of Exonerations; 55 percent of them are Black. (Carroll is white.) More than 250 of those cases involved false confessions.

“Once that threshold is crossed, where there’s a guilty verdict, it’s hard to overturn that,” he said.

It’s unclear what, if any, physical evidence the state still has from the investigation into Sharon Johnson’s murder. In response to a query from the Granite State News Collaborative, State Police said it would take at least 60 days to locate any relevant records.

A Goffstown native, Sharon Johnson owned a home in Bow and worked as an engineer at Digital Equipment Corp. in Amherst. She was eagerly awaiting her second child, her brother told the NH Union Leader after her death.

Melonie Eaton recalled her mother as a kind, caring person who went out of her way to help others.

“That needs to be known, how good of a person she was,” she said.

Police ultimately alleged that Ken Johnson, her husband, offered Pfaff $10,000 to help him kill his wife, and that Pfaff recruited Carroll with a promise to split the money. Police said the two 18-year-olds met Sharon Johnson at the Mall of New Hampshire in Manchester under false pretenses, forced her to drive to the construction site in Bedford and then stabbed and strangled her as Ken Johnson watched, taunting her.

The evidence for those allegations largely consisted of Pfaff’s and Carroll’s statements to police.

Detectives came to focus on Ken Johnson, who was said to have gambling debts, during their investigation. While looking into him, State Police Sgt. Roland Lamy, a veteran homicide detective who took over the case in early 1989, spoke to Pfaff, who had a child with Ken Johnson’s daughter. Pfaff initially denied any involvement, then told police Ken Johnson had him move his wife Sharon’s car the morning after her death. Police came across Carroll because he worked with Pfaff at the time of the murder.

In November 1989, Lamy and other investigators questioned Carroll four times in as many days without a lawyer present. Carroll’s mother, Karen Carroll, a Bedford police officer, actively participated in one interrogation. In a recording of it, Karen Carroll can be heard yelling and pressuring her crying son to say more.

“If you put a knife in that woman, I want to know!” she yelled at one point. “You stabbed her, didn’t you?”

Carroll, who gave several conflicting statements under questioning, ultimately said he stabbed Sharon Johnson in the back, then Pfaff took the knife and stabbed her repeatedly in the chest.

Mousseau, Carroll’s attorney, said the intensity of the interrogation, his youth at the time and his mother’s involvement created a coercive environment, and that his statements to police include “glaring inconsistencies” with other evidence in the case. For example, she said, Carroll told police the murder weapon was his pocketknife, which had a blade of about 2 inches, though a stab wound in Johnson’s back was 4 inches deep.

There were also inconsistencies between Carroll’s confession and Pfaff’s: They described the murder weapon differently, gave different reasons for Ken Johnson’s alleged motive and offered divergent accounts of when and how they got paid. Carroll also incorrectly described Johnson as having a beard and couldn’t identify him in a photo array.

The attorney general’s office declined to comment on Mousseau’s characterization of the case. During Carroll’s trials and his subsequent appeal to the state Supreme Court, which was unsuccessful, state lawyers defended the police’s tactics, said any inconsistencies were minor and argued that other details corroborated the statements Pfaff and Carroll gave to police.

In separate trials, defense attorneys for both Carroll and Pfaff attacked Lamy’s credibility and argued their clients’ confessions were unreliable.

Jurors acquitted Pfaff of all charges in 1991, with one telling the NH Union Leader he doubted Lamy’s testimony and thought Pfaff’s confession was coerced.

Carroll was tried twice in 1992. The first jury convicted him of conspiracy to commit murder but deadlocked on a first-degree murder charge. He was found guilty of second-degree murder at a subsequent trial later that year.

Prosecutors previously dropped the charges against Ken Johnson in October 1991, saying they didn’t have enough evidence to go to trial because neither Pfaff nor Carroll would testify against him.

NHPR’s Jason Moon contributed reporting to this article, which is being shared by partners in the Granite State News Collaborative. For more information, visit collaborativenh.org.