Is a minimum wage hike in the state’s future?

Take your pick: $10, $12, $15 an hour. That’s what the House Labor Committee will have to do after hearing hours of testimony that overwhelmingly was in favor of raising New Hampshire’s minimum wage.

It appears certain that they will recommend a minimum wage of some sort — the state abandoned its own in 2011 and defaulted to the federal minimum of $7.25 an hour — if only to keep up with neighboring states, which all are at $10 an hour and going up.

The question is how much and how fast to raise it, whether it will be tied to the Consumer Price Index in the future and what to do about tipped workers, and perhaps a training wage for youth workers.

“To rely on the federal minimum wage is completely laughable,” led off Rep. Peter Schmidt, D-Dover, at the Feb. 20 hearing. Schmidt is the sponsor of House Bill 178, which simply would institute a minimum and raise it to $10, 60 days after passage.

Only six states don’t have their own state minimum wage, noted Rep. Howard Moffett, D-Canterbury, and all besides New Hampshire are in the deep South. His bill, HB 186, would raise it to $9.50 an hour at the start of next year and to $12 at the start of 2021. The following year, and every year after that, it would be tied to the CPI. His measure also would increase the tipped wage from 45 to 60 percent of the minimum and institute a training wage for youth workers at $8.50 an hour for three months.

“If there is more money in people’s pockets, they are going to spend more. That will mean more business and they will go and hire more workers. It is a virtuous circle in the economy,” he said.

Another bill, HB 731, would start with a $12 minimum next year and increase it in annual chunks to $15 by 2024, tying it only to a positive CPI thereafter. The bill would also have a training wage, but wouldn’t change the percentage of the tipped wage.

“That still isn’t enough,” said Rep. Kristina Schultz, D-Concord, the bill’s prime sponsor. She would give municipalities the power to increase it even more, though she said it wasn’t a deal breaker if that part was taken out. Indeed, all of the sponsors said they would support the others’ bills.

Most of those who testified agreed with Schultz, who said that even $15 — more than double the existing minimum wage — was no longer enough for many people to live.

Yannet Lathrop of the National Employment Law Project, a Washington think tank, supplied some of the statistics. For a single person to be able to afford a one-bedroom apartment in Coos County, they would need to earn about $18 an hour, in Rockingham County about $22 an hour, and those with dependents would need to make more. 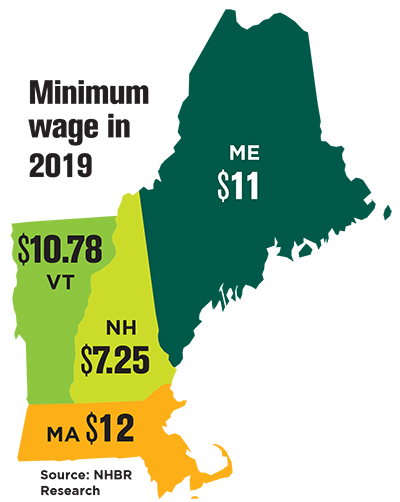 And while most people earn more than minimum wage, many earn less than $15, and not only people who work in the fast-food industry. Store clerks on average earn $11.87 an hour and personal care aides make on average $12.07 an hour. Indeed, nearly half the workers in New Hampshire earn less than $15 an hour, she said.

According to Annelise Orleck, professor of history at Dartmouth College, the current minimum “is not just an inadequate wage, it is a poverty wage. It is a hunger wage. It is a maybe-we-have-to-live-in-the-car-this-month wage.”

Because of inflation, she said, today’s minimum wage earns less “than low-wage workers have at any time during the past half-century.”

The hearing was filled with Raise the Wage activists and church members who favored raising the minimum for moral reasons.

“I drive people from our homeless shelter to go to work. I see people in our food pantry with their Walmart uniform on,” said the Rev. Jonathan Hopkins of Calumet Lutheran Ministries in Freedom. “We tell people the most important thing is work, but we devalue work when get paid so little that you have to go to a food pantry to feed your family.”

“Shame, shame,” said Gail Kinney, pastor of the South Danbury Christian Church. “Jobs should lift workers out of poverty, not keep them there.”

But not everyone was in favor of the bill.

State Agriculture Commissioner Shawn N. Jasper, the previous House speaker, also testified against it. Even though farmworkers are exempt from the minimum wage, he said, it might affect some people working at farm stands.

And, despite testimony that most minimum wage workers are over 20, he said, “not everybody is supporting a family. We’ve got to get our youth out working. They want to learn, and maybe have a little money to support their car and go to a movie.”

But 2 1/2 hours into the hearing, not a single businessperson testified against the bill, though one restaurant owner was waiting in the wings.

Even Henry Veilleux, a lobbyist for the NH Lodging and Restaurant Association, accepted the inevitability that, given the political makeup of the Legislature, some minimum wage would pass.

His big objection was to an increase in the percentage of the minimum wage paid to tipped workers. They usually earn more than the people who work in the back of the house, he said, since most of their money comes from tips, which are based on the price of the meal, and that does go up with inflation.

He also opposed HB 178 for increasing the wage without much warning, and the latter bills’ automatic increases tied to the CPI.

“The CPI increase is awful,” chimed in Bruce Berke, president of the state chapter of the National Federation of Independent Business. It isn’t just the minimum wage, he said. Having a minimum wage tied to the CPI would push out workers with more experience, and that “would hurt profitability. That’s a huge concern.”

But while the NFIB opposes all the bills, he added, “it won’t vociferously” oppose a $10-an-hour minimum wage.