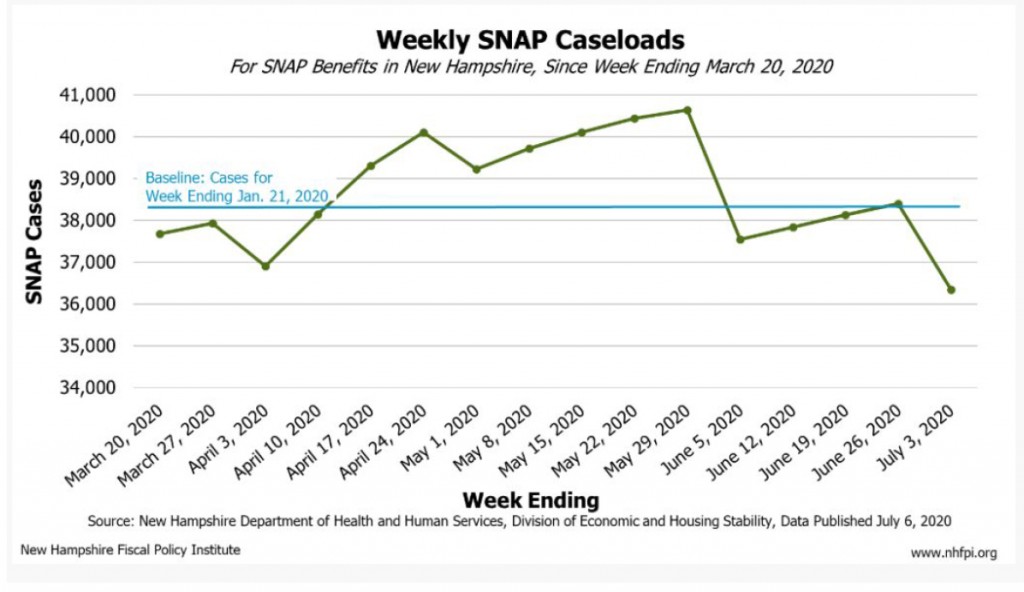 The ​Supplemental Nutrition Assistance Program​ provides critical nutritional aid to individuals and families with low incomes, including those who have faced income losses. As Granite Staters continue to navigate the Covid-19 crisis, aiding those who are most affected and who have the fewest resources will help ensure they weather the crisis while supporting the economic recovery as well. ​

Federal policy actions​ so far have provided temporary emergency SNAP allotments to recipients, along with ​extended nutritional benefits​ to certain children due to school closures, temporarily easing certain redetermination criteria, among ​other changes​.

Despite these actions, additional benefits may be needed as more impacts of the Covid-19 crisis become known, and as other supports expire or are discontinued. Additional SNAP benefits would help support Granite Staters who are experiencing food insecurity while providing a boost to the economy.

As the Covid-19 crisis progressed, necessary changes aimed at minimizing the spread of the 2019 novel coronavirus resulted in a severe ​economic recession​. Individuals earning lower wages and those working in service-based industries that could not easily transition to a remote work model have faced job losses, leading to ​unprecedented levels of unemployment​.

Survey data estimates​ provided by the U.S. Census Bureau’s Weekly Pulse Survey offer insights into the effects of the Covid-19 crisis on Granite Staters. Weekly data show food scarcity, which is defined as adults in households where there was sometimes or often not enough to eat in the last seven days, was elevated at times during the crisis. In New Hampshire, food scarcity is estimated to have ranged between 43,000 households in late April to a peak of95,000 households in late June. ​SNAP caseload data​, where each case represents a household comprising of at least one individual, show a peak in cases from late April to late May, as enrollment in the program increased as a result of initial increases in unemployment and increased need for nutritional aid.

Modest declines in levels of estimated food scarcity and total SNAP cases, to levels seen at the start of the Covid-19 crisis, are most likely tied to ​expanded unemployment benefits reaching more Granite Staters. ​Continued claims​ for unemployment benefits peaked during the late April to late May period, with these weeks seeing sustained continued claims of over 100,000 claims. Many Granite Staters were receiving expanded unemployment benefits large enough in value to disqualify them for SNAP aid, potentially leading to the modest declines seen in estimated food scarcity levels and overall SNAP caseloads.

However, the crisis has led to other consequences that may dampen the effectiveness of SNAP without additional actions.

Over the past 12 months and since the onset of the crisis, the Consumer Price Index, which measures the prices paid for goods and services, increased the most​ for food items like groceries. As the cost of food has increased during the crisis, those experiencing some level of food insecurity may require additional support. Analysis from ​Brookings​ and the ​Center on Budget and Policy Priorities​ discuss the potential benefits of modestly boosting maximum SNAP allotments above their current maximum levels. Given the increased cost of food, along with the financial hardships facing many Granite Staters impacted by the crisis, additional SNAP benefits would support those who are food insecure and provide a form of economic stimulus for the economy.

In addition to directly supporting individuals and families in need of aid, nutritional assistance programs like SNAP have been shown to provide ​economic stimulus​ during times of a weak economy. ​Analysis​ from the United States Department of Agriculture in 2019 estimated that every dollar invested in new SNAP benefits, which are all federally funded, would generate about $1.50 in economic activity when the economy is weak. ​Previous research​ highlighting the effects of boosted SNAP benefits during the recovery period from the Great Recession of 2007 to 2009 found that the multiplier effect of SNAP benefits was even greater. During that period, every federal dollar invested into new SNAP benefits resulted in $1.74 in economic activity generated.

The New Hampshire Fiscal Policy Institute (NHFPI) is an independent nonprofit organization dedicated to exploring, developing, and promoting public policies that foster economic opportunity and prosperity for all New Hampshire residents, with an emphasis on low- and moderate-income families and individuals. For more information, visit ​nhfpi.org​

These articles are being shared by partners in The Granite State News Collaborative. For more information visit collaborativenh.org

We need to hire three people for my New Hampshire biotech company, but the worker shortage is standing in our way

Opinion: Sen. Hassan is fighting for investments in supply chain resiliency - why that matters for my business

Support for Ukraine from a Granite Stater who lived there