New Hampshire is ‘on the move,’ president says 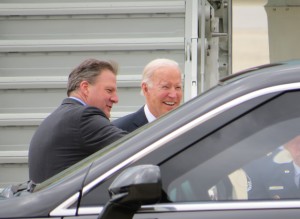 Portsmouth Harbor has been on the receiving end of millions of dollars in federal money in recent years. About $1.7 million from the bipartisan infrastructure bill is designated to go to the harbor in 2022, to upgrade a shipping channel and turning basin. (In total, the federal law set aside $17 billion for repairs and upgrades to port infrastructure across the county.)

That money comes on the heels of $18.2 million from the U.S. Army Corps of Engineers 2021 budget used to widen a turning basin in the harbor to allow larger ships to pass through.

“We widened that turning basin to 1,200 feet,” Biden told a small crowd of invited guests and press at the Port Authority. “We got it done. Now it’s easier and faster and cheaper and safer for ships to get in and out.”

Portsmouth Harbor handles about 3.5 million tons of cargo, amounting to $2 billion, annually. Fossil fuels like oil, propane and coal made up 55 percent of the marine commerce transported through the port in 2012, according to a study published that year. But some leaders are looking to the harbor as a place to support new renewable energy resources – particularly offshore wind. Biden briefly touched on that possibility in his remarks Tuesday.

“The port can welcome larger ships, more cargo, like the massive towers and hubs needed for offshore wind farms,” he said.

Paul Brean, executive director of the Pease Development Authority, told Seacoastonline he sees big opportunities for Portsmouth’s role in global supply chains, particularly in the construction and maintenance of offshore wind developments in the Gulf of Maine.

Biden painted a hopeful picture as he spoke in a damp, tarp-roofed building on Portsmouth Harbor. Patches of sun shone through holes in the structure, peeking through lingering rain clouds.

“We’re the only country in the world, I believe, that has come out of every crisis we’ve faced stronger than we went in,” he said. “And this port is a perfect example. A lot of important things come into these terminals, from salt to de-ice roads to 85 percent of the home heating oil used in this state.”

For several merchants in downtown Portsmouth, infrastructure concerns have had an impact on their businesses.

At the book and toy shop G. Willikers on Market Street, Jody and Bob Breneman were featuring the book “Joey: The Story of Joe Biden,” a children’s book about the president written by First Lady Jill Biden.

For Jody and Bob Breneman, siblings who own the shop, supply chain challenges have hit them hard during the pandemic – especially for their toys.

“We heard of the freight, the ships on the water for weeks and weeks at a time. And it certainly affected our holiday shipping, getting product,” Jody Breneman said. “We really had to work with each other, our companies and ourselves and just be patient with each other and really kind of keep the morale up because the industry was very stressed, and still is.”

Cost has also become an issue. Breneman said some wholesalers have raised their prices as much as 30 percent – an increase the store has had to pass down to consumers. They stopped selling some products, because the price they would have needed to charge was not worth the value of the item. The shop pivoted, relying on more locally made products.

But though the Brenemans were excited about Biden’s visit, they said they didn’t anticipate the infrastructure improvements in Portsmouth having a big impact on their own operations.

Their products don’t come in through Portsmouth Harbor. And for Jody Breneman, the idea of making Portsmouth a bigger supply chain hub is a mixed bag. It would be nice to get products in a more streamlined way, closer to home. But dredging the harbor comes with environmental concerns, as well as concerns about how more ships might impact tourism: For instance, she said the bridges that carry people into the city could be raised more often, making travel more difficult.

And, she said, the bigger problem she’s seeing in the shipping companies she uses is their ability to find workers.

“I do think that something needs to change about how the people who are working in the ports are paid and supported,” she said. “They can’t get people. And typically that means because we’re not paying people enough.”

“Even though the port infrastructure is probably going to help get boats in quicker, there’s not enough people to drive the trucks that we need to get the bikes here to us,” she said.

And when she thinks about Portsmouth becoming a bigger hub for moving goods, she worries about the workforce in the area, the availability of workers to staff trucking companies, and the cost of living.

Throughout his remarks Tuesday, Biden focused on cutting costs and improving safety and health through infrastructure investments and other federal efforts. He touted a variety of federal investments, including funds for roads and bridges, PFAS remediation, lead pipe removal, broadband, and upgrades to the electricity grid.

New Hampshire is expected to receive $1.1 billion in federal funds for highways, $100 million for broadband coverage extensions, $420 million for water infrastructure investments, and $125 million for public transportation, among other funds.

Biden also addressed the high prices for energy, food and goods many Granite Staters are experiencing, saying the Covid-19 pandemic and Russia’s war in Ukraine were to blame.

“I’m doing everything I can to bring down the price to address Putin’s price hike,” he said, highlighting his release of 1 million barrels of oil per day for six months from the Strategic Petroleum Reserve.

The president concluded with more optimism.

“Maine, New Hampshire, America have gone on the mend,” he said. “They’re not on the mend any longer. They’re on the move.”

This articles is being shared by partners in the Granite State News Collaborative. For more information, visit collaborativenh.org.