How long will NH continue to have fossil fuel generators? 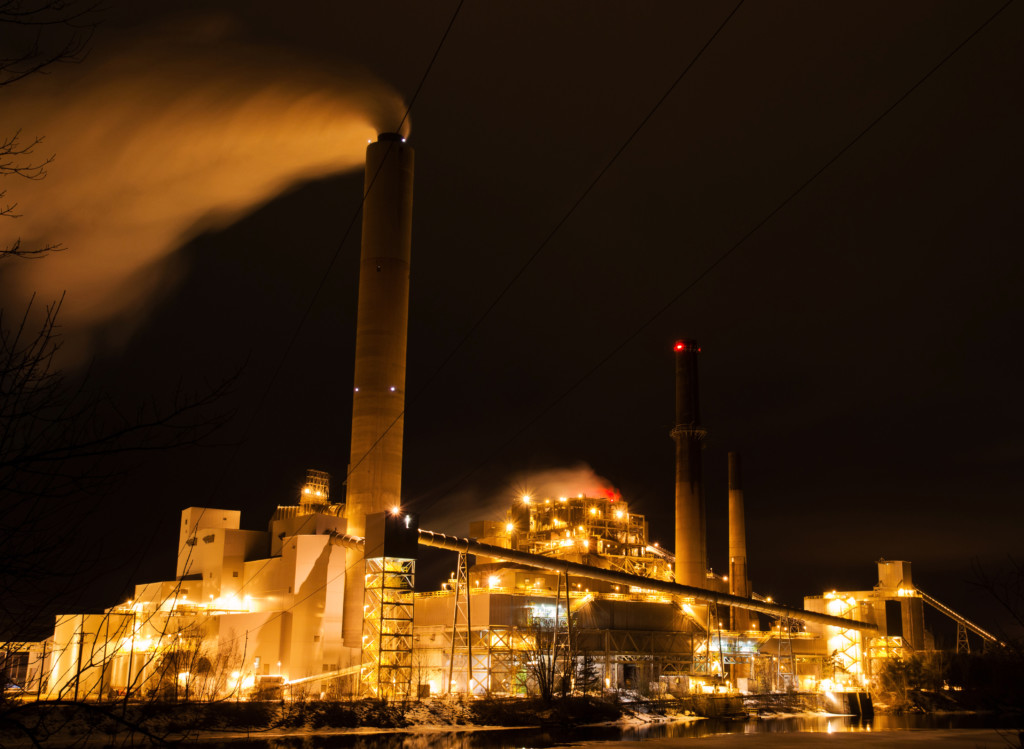 Merrimack Station in Bow is one of five fossil fuel plants Eversource sold to Granite Shore Power in 2018 for $175 million. (Photo by Christian Patti)

Will New Hampshire continue to burn coal and oil to produce electricity? And for how long?

Those are questions for Granite Shore Power — a joint venture of Castleton Commodities International, LLC and Atlas Holdings with 145 employees — which, in January 2018, bought five fossil fuel plants from Eversource for $175 million.

The plants — Merrimack Station in Bow, Schiller Station in Portsmouth, Newington Station in Newington and two small jet fuel plants in the North Country — have a total generating capacity of slightly over 1,000 megawatts, and with the purchase, Granite Shore had the obligation to keep them running for a minimum of 18 months. That obligation ended last month — yet the plants are still running.

There are also economic and environmental questions for the rest of the state and the region, which are trying to get off fossil fuels, particularly coal, to avoid contributing to climate change.

In those 18 months, the plants — most of which produce power intermittently — emitted close to the same amount of greenhouse gases as all the cars in New Hampshire produce in a year.

How long will the plants’ operation continue? The company would only say it would “continue to participate … in the power generation market providing a secure, cost-efficient source of power generation to New England on its most vulnerable days.”

But actions speak louder than words. Last February, Granite Shore bid into the forward capacity market. That means it told the ISO-New England, which operates the regional electricity grid — it intends to keep the plants open until May 2023.

And it said it would continue to participate in future auctions. In return, ISO-NE will pay them a lot.

From January 2018 to May 2023, ISO-NE will shell out more than $400 million just to make sure it can rely on the plants to produce power in periods of extreme peak demand and weak supply — the coldest days of the winter and the hottest days of the summer. And that’s on top of what it gets on the market for the electricity they actually produce.

Since New Hampshire ratepayers pay ISO-NE to run the grid, they all contribute to that cost.

Those costs have been shrinking and are expected to continue to do so, thanks to increasing energy efficiency, greater use of renewable energy and eventually grid modernization. ISO-NE predicts it won’t need as much peak power, so it is offering to pay less for it.

Granite Shore was eligible to receive $124 million over the last year, ending in May, but it will only get $45 million for the year ending in May 2023. For Merrimack Station, the figure drops from $50 million to about $20 million.

Not all grids make forward capacity payments, noted Don Kreis, the Public Utilities Commissions’ consumer advocate, who added that Texas operates without price caps, allowing the market to dictate how much utilities should pay in times of shortage.

New Hampshire, however, has a cap, so it pays power producers in advance to be on call.

Still, he argues, this leads generators to get “free money” while hardly producing anything.

ISO-NE, however, defends the practice, noting that slightly more than 10% of power was secured through the last forward capacity auction, and it reduced the contracts for very high-priced generators to zero. And it noted that many plants are retiring. About 5,000 megawatts of oil, coal and nuclear plants have retired from 2013 to 2022, and another 5,000 more megawatts are at risk (including GSP’s major plants).

The continued existence of Merrimack Station has been particularly controversial.

It is the largest coal-burning plant contributing to the New England power grid, save for the 485-megawatt Bridgeport Harbor station in Connecticut, which is due to be replaced by a gas facility next year. But the Bow plant doesn’t run near a gas line, and its boiler can’t easily be converted to burning wood, so it continues to burn coal, thanks to the forward capacity payments, yet it doesn’t produce much power.

In 2018, for instance, it ran at less than 13% of capacity, according to Granite Shore. Yet it emitted 724,000 tons of carbon dioxide in 2018 and 950,000 tons in the 18 months since it has been sold, according to the state Department of Environmental Services.

Along with nitrous oxide, another greenhouse gas, the plant’s carbon footprint was the same as 273,488 cars — nearly half the registered vehicles in the state in 2016.

As Lila Kohrman-Glaser put it, “Ever hour that plant operates puts out the same amount of carbon as the average person does in 26 years, and I’m 26. It’s the same as my entire life.” 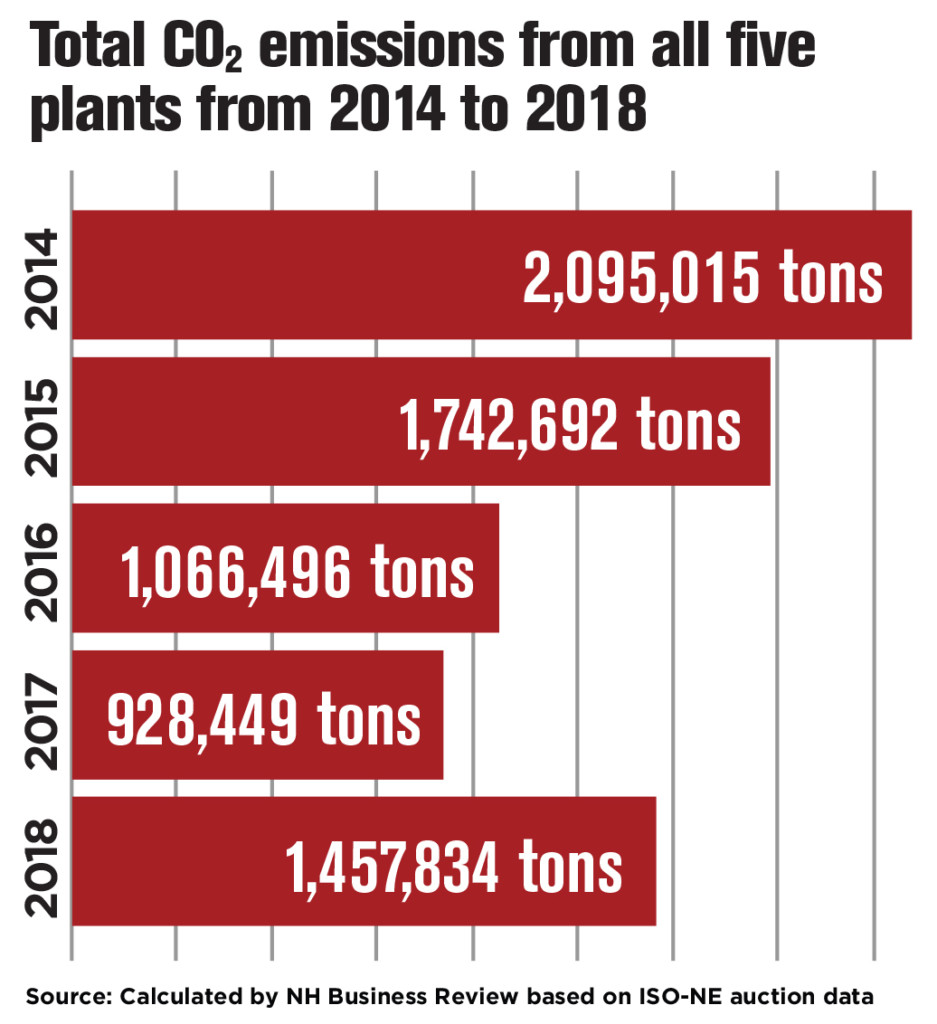 The Dover resident is operations coordinator for 350 New Hampshire, inspired by but not affiliated with the national 350.org, both named because of their goal to reduce atmospheric carbon dioxide to 350 parts per million from the current level of 400 ppm.

“It will go offline eventually,” she said, “but every year it remains open, people will suffer from climate change. We are out of time. People are dying. July was the hottest month in the history of the world. If our elected officials won’t shut this down, then the people will.”

When asked about the plant’s contribution to climate change, Granite Shore said in a statement: “Merrimack Station has invested significant capital in emission control equipment to operate in an environmentally responsible manner.”

Perhaps the most well-known fight involving Merrimack Station was over its scrubber, a device installed to reduce emissions of mercury and other hazardous pollutions, though it has little impact on carbon dioxide emissions. Groups like the Sierra Club opposed the scrubber after its price tag almost doubled to $457 million, arguing that it would be better economically and environmentally to simply shut the plant down. Eversource installed the scrubber anyway, with the blessing of the Legislature and the Public Utilities Commission. When it sold the plant, it only had to pay $25 million of that cost. Ratepayers were stuck with the rest of the tab as “stranded costs” on their bills.

Then in March, the New Hampshire chapter of the Sierra Club and the Conservation Law Foundation filed another legal action against the plant, focused on water, not air. The plant allegedly violated its existing federal National Pollutant Discharge Elimination permit dating back to 1992 because it discharged about 287 million gallons of heated water directly into the Merrimack River.

The discharge jeopardizes fish and opens the habitat to the Asian clam, which forms dense clusters that not only suck out oxygen needed by native fish but can cling to boat shells and intake valves, according to the lawsuit.

The lawsuit charges that the river’s water sometimes reaches temperatures of 90 degrees and has contributed to a 95% decline in resident fish species in the Hooksett Pool.

Because of such concerns, the U.S. Environmental Protection Agency proposed a revised draft permit that required the owners build a cooling tower. While no one knows how much such a system would cost today, Eversource once gave a $68 million installation estimate, with an annual operating cost of $6 million. But a final revised permit has not yet been issued.

In addition, the suit, filed in U.S. District Court in Concord, called for millions of dollars in penalties for the alleged daily violations.

“We are proud to be operating in full compliance with the permit and regulatory requirements we assumed when taking ownership. In the coming months, we expect that EPA will advance a new NPDES [National Pollutant Discharge Elimination System] permit for Merrimack Station,” Granite Shore said in a statement when asked about the suit.

The company’s attorneys were a bit more combative in their motion to dismiss the lawsuit, complaining that the plaintiffs have “waged war” on the plant for years and “their unabashed policy objective is to shut it down,” citing the fight over the scrubber.

They cited a 1992 study that found there were no fish kills and noted that the plaintiffs agreed to the Eversource sale that required Granite Shore to keep the plant open for 18 months. In a separate motion, it argued that the suit should be put on hold until a new permit is issued. The court was scheduled to hold a hearing on the dismissal motions on Aug. 15.

Two 50-megawatt boilers at Schiller Station, located in Portsmouth on the Piscataqua River, also burn coal though they can also use fuel oil. They mainly provide peak power backup, though Granite Shore won’t say how often they are run. The last 55-megawatt boiler — which has been converted to burn wood chips — does run regularly. Some environmentalists see that conversion as an improvement, since the fuel is renewable, but it too produces carbon dioxide.

That ability allowed Newington to participate in ISO-NE’s Winter Reliability Program, created to provide resiliency to the grid on cold winter days when natural gas pipeline capacity becomes constrained in New England. Payment to participate in that program is in addition to forward capacity payments, but ISO ended it after the winter of 2017-18.

• Granite Shore Power is not a conglomerate but a joint venture of Castleton Commodities International LLC and Atlas Holdings, which is a conglomerate.

• The Bow plant was open and running around the clock, but only produced power less than 13% of the time in 2018 and it emitted 724,000 tons, not cubic tons, of carbon dioxide.

• All other measurements should be in tons, not cubic tons.

• The Winter Reliability Program the Newington plant took advantage of ended after the winter of 2017-18.