How an average NH strip mall is riding out Covid 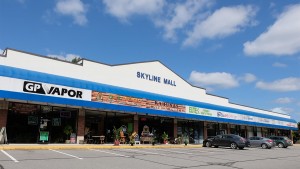 Somewhere between the economic intimacy of Main Street shopping, and the “Deals! Deals! Deals!” consumerism of the outlets, there lies the humble strip mall.

Mom-and-pop stores nestled alongside national chains, sharing walls and a sidewalk and a parking lot. Every business is independent, but there’s also a collective identity to the plaza.

“There is a connection of businesses. If everybody is doing well, obviously if there is more flow of people, you are going to get some business from it,” says Eduardo Rivera, who owns Billy’s Famous Pizza, on the northern end of the Skyline Mall in Merrimack.

This humble strip mall, a grab bag of nine businesses hard by the Daniel Webster Highway, is perhaps as good a place as any to examine how the pandemic and resulting shock to the economy have hit New Hampshire.

Along with Billy’s Famous Pizza, there’s a laundromat, a carpet store, an H&R Block, Big Kahuna’s restaurant, a nail salon, a vape shop, a physical therapist, and on the far southern end, one of the state’s few medicinal cannabis dispensaries. 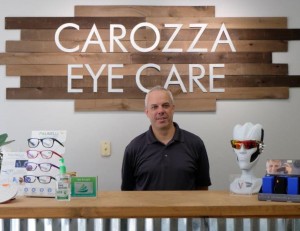 “You can do a lot of things in one day here,” jokes Tom Carozza, owner of Carozza Eye Care.

Carozza says when he was scouting for a location for his business, he wanted visibility. The Skyline offered just that.

“Five thirty, six o’clock on a weekday, the northbound traffic is a parking lot out here,” says Carozza, pointing at the two-lane road outside his window. “It’s free publicity. Free advertising.”

In late March, when the virus emerged and Gov. Chris Sununu shuttered all nonessential businesses, that traffic largely dried up. Carozza, who learned optometry in the U.S. Army, shut down for four weeks.

After reopening, he looked into federal aid programs and other state grant funds, but ultimately decided not to apply. Some of his creditors worked with him on outstanding bills, while others demanded payment.

During the summer, he says there have been good stretches of business, and a few very quiet days.

This fall, when coronavirus cases could surge, he’s not sure what to expect.

“I don’t really know what’s going to happen. But it definitely seems like, based on some other areas of the country, that something could start to pick back up. And if that happens, I’ll roll with it. I don’t see myself closing again because we have a lot of safety guidelines established,” he says.

‘Nothing in the handbook’

While customers wait for Carozza to finish making their glasses, they can walk under the Skyline’s blue and white awning to grab a slice at Billy’s Famous Pizza. 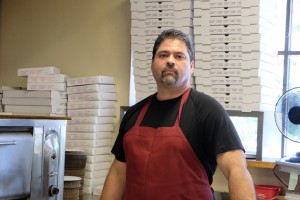 After 20 years in the food business, Rivera purchased the pizzeria in February just weeks before the shutdown.

“I always wanted to own something for myself, so I figured this would be a good start,” he says. “There was nothing in the handbook about a pandemic coming in.”

When the pandemic hit, Rivera initially turned off his ovens for two weeks, but then he ramped back up, focusing on take-out and delivery. He received federal relief funds and didn’t lay off any workers. In fact, in recent weeks, he’s had trouble finding line cooks.

One other challenge is the rising price of his ingredients, everything from cheese to pepperoni.

“You could get it, but it is costing you more to get it. For a business where the margins are small, everything affects you,” he says.

Every business in this strip mall has reopened since the shutdown, or never closed in the first place. On a sunny Monday, there’s someone getting a manicure at the Number 1 Nails salon. A guy hauls a basket of clothes into the Streams of Water Laundromat. Further down, the Godfrey Family Carpets store has a sign up asking people to call for an appointment.

Continue walking under the awning, and you’ll come to Big Kahuna’s Restaurant.

In the kitchen, co-owner Amanda Spooner is grilling chicken and preparing kale.

“We go through so much kale, it’s something special about Kahuna kale,” she explains. “Everybody loves it, and we can’t quite put our finger on why; it’s just different. People can’t duplicate it.”

Amanda’s husband JP, a laid-back guy who used to live in Hawaii, sits down at one of the tables.

He doesn’t have fond memories of the first few days of the shutdown in March.

“We were open, just nobody showed up, and that was pretty traumatic,” he says.

Since then, delivery orders have taken off, and new customers who may not have known about Big Kahuna’s have found the menu online.

Spooner says a few employees weren’t comfortable coming back to work, but that he was able to hire new employees.

During the pandemic, he’s tried to turn Big Kahuna’s into what he calls an oasis of normalcy: Keep the menu and the ingredients bright. Keep the energy positive. Keep your staff happy.

And spread that energy throughout the plaza.

“This isn’t a multimillion gigantic super attractive place to look at. It’s a plaza in the middle of Merrimack,” he says. “But the magic happens when you get out of your car and you come into one of these businesses, and you say to yourself, whoa, I wasn’t expecting that.”

The Skyline Mall is its own little microeconomy right now. Each business is on its own, but each one is connected. As Spooner puts it, they will “bend and sway” together.