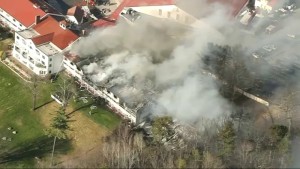 The New Hampshire business community is stepping up to offer the Red Jacket Mountain View Resort in North Conway any support it can muster following a devastating fire that destroyed 75 rooms at the landmark hotel.

Mike Somers, CEO of the NH Lodging and Restaurant Association, told NH Business Review Monday his organization will help the resort’s employees as soon as possible.

“The biggest way we can help is the New Hampshire Hospitality Employee Relief Fund. It allows us to support displaced workers through a grant process,” Somers said. According to Buzzfile.com, the Red Jacket employs 99 full-time and part-time employees.

Somers explained the resort’s business interruption insurance and facility insurance will help the Red Jacket rebuild the property over time. But to have this happen when the state is emerging from the Covid-19 pandemic and right at the beginning of the 2022 spring and summer tourism season is devastating for any tourism business.

He has seen some interruptions during his 14 years at the helm of the association, “but this frankly is on a level we have not seen in many, many years.”

“What is not clear yet is, will they be able to operate the rest of the rooms this season?” Somers said. In addition to the 75 rooms that were lost, it is not known yet if other portions of the resort can be fully operated depending on the level of smoke and water damage they might have sustained.

On an emotional level, seeing the Red Jacket resort ablaze was upsetting for many New Hampshire families and visitors. Somers remembers bringing his children to the Red Jacket during February school vacation so they could enjoy the Kahuna Laguna indoor water park.

New Hampshire businesses have a proud history of helping one another in times of trouble, and Somers said this was evident almost immediately in North Conway.

Within hours after the fire struck and forced hotel guests to evacuate to safety, the Fox Ridge Resort took hotel guests in, Somers said. “The community stepped up and donated clothes and all the belonging that were lost in the fire,” he added.

Justin Grimes, managing director of Red Jacket Resorts, told reporters hotel officials will announce a reopening date and are in the process of addressing future reservations with their hotel guests, according to WMUR.

The 150-room Red Jacket property was sold last November in a package with other properties owned The Davenport Companies, the company that developed it over 50 years ago. The buyer was a privately held investment firm based in New York.

The loss will also be keenly felt from a business revenue and state rooms and meals tax perspective.

By just looking at the 75 rooms that were destroyed by the blaze and calculating an average room rate of $300 per night over a 180-day period between May and October – the height of the New Hampshire tourism season – the Red Jacket could lose more than $4 million. The state will lose more than $344,200 of uncollected 8.5 percent rooms and meals tax.

The fire broke out in the south wing of the resort on April 30. The Union Leader reported there were 155 guests staying in the hotel during the tail end of New Hampshire’s school vacation week. Nearly 30 New Hampshire fire departments responded to the fire. The State Fire Marshal’s Office is investigating the cause of the fire.