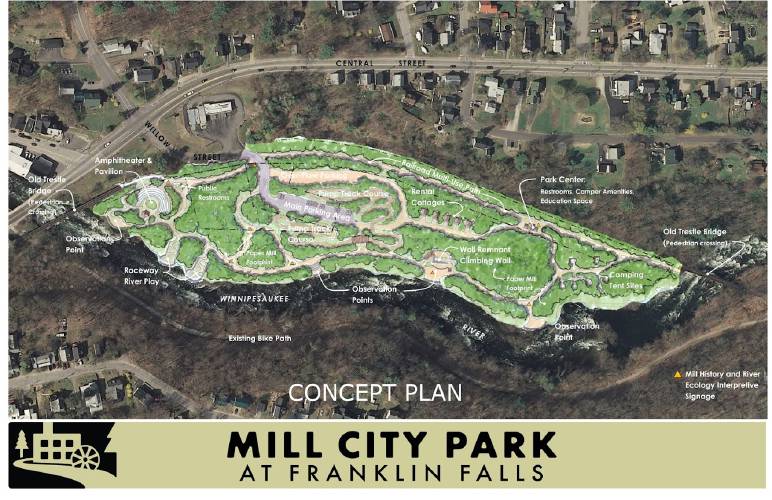 A groundbreaking ceremony is scheduled for Monday, July 12, to inaugurate work on the eagerly anticipated Mill City Park in Franklin, the first whitewater park in New England.

Led by AJ Coleman Construction of Conway, the first phase of construction will be a timber-frame pavilion, parking lots and two sets of standing waves in the riverbed. In 2022, construction is scheduled to begin on refurbishment of Trestle Bridge – an old railroad bridge –into a footbridge to connect the Winnipesaukee River Trail to Mill City Park and the downtown area.

Eventually, the park will feature sites for camping, climbing walls, trails for walking and bicycling, an amphitheater and historic features around remnants of three mills that once stood there.

Boulder, Colo.-based Recreation Engineering and Planning, which has worked on whitewater parks around North America, is designing Mill City Park.

“We’ve done whitewater park projects all over North America and in all sorts of different environments. Every project is totally unique and totally different,” said the firm’s Mike Harvey. ”The Winnipesaukee River and Franklin have all the ingredients for a world-class whitewater park.”

He said the site’s proximity to downtown Franklin “is critical,” adding that it is “the number one ingredient for a successful project.”

Mill City Park has been welcomed by city officials and the Franklin business community as a driver of economic development, with the potential to attract over 161,000 visitors annually.

But Franklin business owner Marty Parichand, executive director of the nonprofit Mill City Park, said the project may have even more of an impact than that.

“Originally, I thought we were building surf waves,” he said. “We are actually rebuilding our community’s sustainability, quality of life and pride.”

The groundbreaking ceremony will start at 9 a.m. at Trestle View Park.