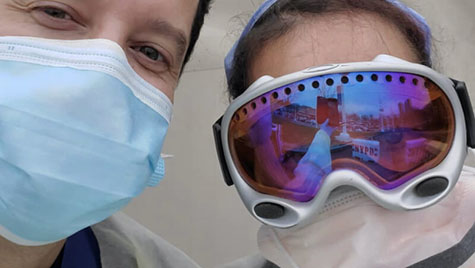 New Hampshire skiers have joined the effort to put Covid-19 on a downhill slope with “Goggles for Docs,” a nationwide effort to provide ski goggles to medical professionals across the country who have no eye protection as they care for infected patients. There are at least four drop-off points in New Hampshire.

The initiative began in late March when Jon Schaefer, owner of Catamount Mountain Resort in Hillsdale, N.Y., and Berkshire East Mountain Resort in Charlemont, Mass., received an e-mail from Mike Halperin, an emergency room doctor at the Jacobi Medical Center in New York. Halperin said that stocks of protective equipment were shrinking rapidly and asked if ski areas had supplies of goggles.

Schaefer, who had shut down his ski areas, reached out to friends and together they built a website — “Goggles for Docs” — that enables hospitals to specify how many pairs of goggles they need and donors to report how many they have packaged and where they have shipped them. By April 7, within just 10 days, some 18,000 pairs of goggles were shipped, meeting two-thirds of the requests posted by some 200 hospitals.

Discovering the program on social media, Billie Bondar, a podiatrist and avid skier from Rochester, said she said, “Boom, bingo,” went to the website and registered her office at 660 Rochester Hill Rd., Suite 3, as a drop-off center.

“I have two nieces working with infected prison inmates in Michigan,” she said. “I want to help those working on the front lines.” She stressed the importance of eye protection and noted that goggles are more effective than face shields, which tend to fog up, especially if physicians and nurses are wearing glasses.

Erica Frieswick, who manages the Sun & Ski Sports store in North Conway, said she was encouraged to register as a drop-off point by the marketing director at corporate headquarters in Houston.

“We began collecting goggles last week,” she said. “I have a friend who is a nurse who told me she preferred goggles,” she said. Frieswick said that the New Hampshire association SKI NH has passed the word about the program, adding “I’ll have to get a bigger bin.”

Both Bondar and Frieswick said they would like to donate to local hospitals — Frisbee in Rochester and Memorial in North Conway — but both stressed they would be just as happy to have them go where they are most needed.

Loon Mountain Resort also has registered as a drop-off center opened and Officer Ryan Nolan of the Boscawen Police Department became the fourth to join the program by arranging to accept donated goggles at the Boscawen Police Station on Main Street. Officer Nolan was not on duty and could not be reached for comment.