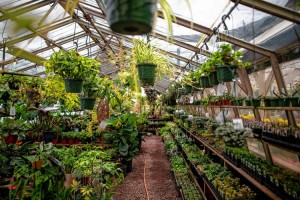 The House By the Side of the Road in Wilton. (Photo by Ben Conant)

As the days get longer and the sun shines a little brighter, the ground thaws from the long, cold winter, leaving gardeners around the region anxiously waiting to get their hands in some dirt.

Last year, amid the onset of the coronavirus pandemic, people reconnected with nature and their own backyards, bringing about a resurgence in at-home growers and local garden centers struggled to keep up with demand. And the outlook for 2021 isn’t much different.

“We’re stocking up as much as we can, but we just can’t seem to keep up,” said Abby Broderick, owner of House By The Side of The Road in Wilton. “It has not stopped since last March.”

Broderick said she is fortunate to have good suppliers, but in many instances they can’t keep up with the increase in orders.

“If I need anything now, forget it,” she said. “Usually everything is on back order. So what you get is what you get.”

And because of that Broderick has been planning even further into the future than normal, having already placed her orders for fall bulbs.

“It’s been a domino effect,” she said.

“Finding product is a very hard thing,” Cutter said. “And we don’t know until it comes in if it’s been substituted or what we actually ordered.”

She says that COVID-19 restrictions forced people to seek alternative recreation, and it appears that gardening was the preferred choice of many.

“Everyone wants their own orchard in their backyard and grocery store in their garden,” Cutter said.

House By The Side of The Road plants a lot of annuals and perennials and made the decision to increase their plantings by about 25% this year.

“We’ve got the product here, it’s having the time to get them into the pots,” Broderick said. And having enough pots has also been a challenge. She said getting certain size pots are a couple months out, where “normally it would be here in a week,” Broderick said.

Cutter said they purchase plants from local farms and she has been told to place her orders as soon as possible.

“They’re calling us and saying you need to order what you want,” she said.

Cutter said there’s more of an emphasis on people getting things sooner rather than later because she can’t guarantee if they will get more. But she also cautions about people getting plants too early before the ground is ready. While last year was a wild ride, Cutter’s suppliers are saying 2021 will be even crazier.

‘Right across the board’

Last year, both Broderick and Cutter said finding a bag of soil was next to impossible and it has them wondering if this year will be the same. There was a big run on tall shrubs as people looked to create more privacy and “I’ve already had a lot of requests for them,” Broderick said.

With so many houses being purchased, Broderick said there will be a lot of demand for those looking to spruce up their new backyards and gardens.

“So I think (the demand) is going to be right across the board,” she said.

Cutter said fruit trees are becoming scarce and expects vegetable starters to be the same. She recently ordered strawberries and had to bulk up her numbers.

“If we don’t get multiples of what our first order might be, it might not be there next week,” she said.

Broderick has almost sold out of bulbs, and in normal years, there would still be some available at the garden center in June or July.

“People are jumping the gun by five or six weeks,” Broderick said.

She believes that not only are people emphasizing upgrading their garden areas, but the additional money provided to so many via stimulus checks has allowed others to embark on projects that may have previously been on hold.

Traditionally, the winter months are slower, allowing for some upkeep around the property, but Broderick said it never slowed down.

“There was no down time,” she said. To prepare for the increase in customers, Broderick added three new employees, bringing up the total to 15.

In addition to plants that can be put in the ground, Broderick said the run on house plants is unlike anything she’s seen before.

For Cutter, the last year has truly been an anomaly.

“We’ve been here 48 years and we’ve never seen anything as bizarre as this,” she said.