In-river permit is the first of its kind, officials say 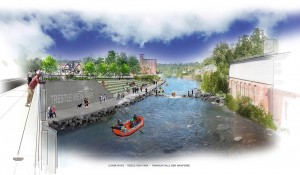 Mill City Park, the nonprofit spearheading construction of a whitewater park on the Winnipesaukee River in Franklin, has received a wetlands permit from the New Hampshire Department of Environmental Services, paving the way for completion what city officials call the “foundation” of the city’s redevelopment plans.

The whitewater park, at the base of Franklin’s downtown, is seen as the anchor of the rebranding of the city as a outdoor recreation destination, said City Manager Judie Milner.

The permit – which city officials said is the first of its kind in New England – now allows for construction of the in-river features of the project: a section of the river with simulated waves for surfers with boards and a novice to intermediate freestyle kayaking hole. The project also includes stadium seating near Trestle View Park and a river-level walking path.

Ever since being conceived and launched by Marty Parichand six years ago, Mill City Park-sparked redevelopment plans have gained momentum, including Newmarket-based Chinburg Properties’ recent purchase of the Stevens Mill, the largest defunct mill in downtown Franklin as result of the whitewater park plans.

“The whitewater park was a major factor in considering the Stevens Mill project,” said Eric Chinburg, president of Chinburg Properties. “Often it is hard to invest in underutilized mill buildings, without community support and a dedication to community improvement, both of which we found in Franklin.”