With new facilities in NH and India, company ramps up capacity 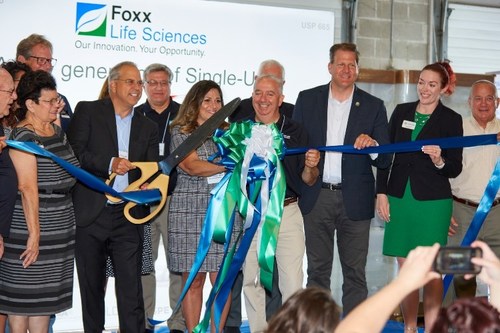 As rapid growth continues in the pharmaceutical and bioscience industries, Foxx Life Sciences, a producer of single-use process equipment with locations in Salem and Londonderry, is finding itself in an opportune spot.

Foxx says it has seen over 40% growth in nine of out 10 years, as the industries shift away from stainless steel bioreactors, which slow the production of drugs and vaccines during cleaning periods, to disposable plastics and other related materials.

When the Covid-19 pandemic began, like many companies, Foxx did experience a drop in business from its university laboratory buyers as academia shut down in-person learning, but Foxx also saw tremendous growth in its bioprocess division, with the development of vaccinations and other products related to the pandemic.

“We’re under NDAs (non-disclosure agreements), but it’s fair to say Foxx products are involved with the majority of vaccines,” said Foxx CEO and President Thomas Taylor.

Foxx also started producing KN-95 masks and Covid test kits, 600,000 of which were purchased by the entire University System of New Hampshire in preparation for reopening. Those products helped Foxx make up for nine months of lost revenue from its university laboratory buyers. And when schools opened up, Foxx saw demand pick up at a greater rate pre-Covid.

Taylor attributed the company’s success to not closing down during the pandemic and continuing to manufacture products in expectation of demand picking up greater than before, utilizing local suppliers. He says that in stark contrast to many companies in a variety of industries that shutdown production during an economic lull and were ill-prepared for the demand once the economy picked back up again.

“Because we’re privately held, Foxx is able to hold more inventory, therefore we have been the company that has been supporting not only our customers but some of our competitors,” said Taylor.

Those competitors are multibillion behemoths, much larger than Foxx, and that worked to Foxx’s advantage, said Taylor,

“The small companies can out-strategize the big companies when it comes to speed and delivery,” he said.

Foxx said that earlier this summer, during a conference call, the U.S. ambassador to India thanked Foxx for its support to vaccine manufacturers.

“That was pretty awesome,” said Taylor.

In July, the company held an open house for two new manufacturing facilities, one in Londonderry and one in Hyderabad, India, where the company previously had based its Asia sales team but did not have production in place.

“They took us two to three years to build, but they also give us a tremendous amount of capacity with pharmaceutical manufacturing,” said Taylor, who foresees the India location meeting demand from Asia and Africa.

But like all New Hampshire employers, one aspect that could hold back Foxx’s growth is availability of workforce talent.