If you’ve been paying even the slightest bit of attention to the voting habits of Annie Kuster, the honorable congresswoman from New Hampshire’s 2nd District, you know that she’s not exactly getting rave reviews from fellow Democrats who reside to her left, politically speaking.

And, considering the way some of her votes have been directed, there appears to be plenty of room to Kuster’s left.

A memory refresher: Since taking office, the freshman congresswoman has cast some votes that have variously concerned, upset and angered those Disgruntled Dems. Among them were a vote to water-down tougher regulations governing derivatives trading; a vote to support the Cyber Intelligence Sharing and Protection Act (which would sanction the sharing of online info between the government and the private sector); a vote in committee (and later reversed) to limit access to food stamps; and her vote against a measure that would have ended the National Security Administration’s wide-ranging data collection activities.

But it may be that the biggest reason the more liberal among the state’s Dems are growing more and more irritated by Kuster is her decision over the summer to join the New Democrat Coalition of House members – a group that describes itself as a “moderate, pro-growth” group, but liberals see as “conservative, Big Business-oriented” and “corporate tools.”

The last group of descriptors was supplied by Howie Klein, who’s a blogger at DownWithTyranny and supports liberal candidates around the country through his Blue America PAC — which last time out raised a nice chunk of change for Kuster’s campaign.

This time, no dice. In fact, it almost sounds like Klein wants his money back.

Writes Klein, (he’s referring to a Kuster fundraising letter in which she slams “Tea Party Republicans who have decided to put party over country”): “When it comes to her committee votes, she's been a shill for corporate America and Wall Street, and if you examine her public voting record, she's like one of those Republicans she's excoriating in her letter. According to ProgressivePunch she's earned ZERO ratings– just like the Republicans– on civil rights, cyber security, infrastructure funding, corporate tax breaks, clean water and water conservation, and even global warming.”

Despite the disgruntlement, one thing is playing in Kuster’s favor – the lineup of potential GOP candidates in the 2nd C.D. Unless something drastic happens, she ain’t going nowhere, except back to D.C., in 2014. 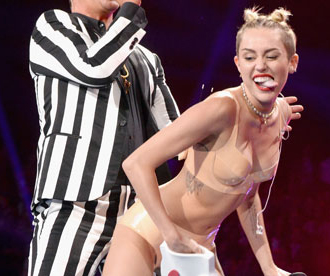 In what could only be construed as a statement on the demographics of the Granite State, the website Business Insider recently sifted through the 158 letters sent to the FCC after Miley Cyrus’ notorious performance during MTV’s Video Music Awards show. (You may have heard about it.)

Going through zip code data from the people who got their dander up over Miley and the foam finger, etc., BI compiled a chart (headlined: “Here’s Where All The Miley Cyrus Haters Live”) showing the location of all the folks who just couldn’t keep their anger to themselves.

Guess who topped the list of angry states, based on letters sent per capita?

New Hampshire — where the motto, “Live Free or Die,” mentions nothing about twerking.

(You can check it out yourself at http://www.businessinsider.com/maps-heres-where-people-freaked-out-the-most-because-of-the-miley-cyrus-vma-performance-2013-9.)

Never mind the arguments over the vulnerable landscape, the cost, the economic impact, etc., The Boston Globe handed opponents of the Northern Pass project fuel their campaign: The newspaper has given NP its endorsement.

In a Sept. 14 editorial, the newspaper opined: “… no amount of bad public relations changes the fact that New England needs new energy sources soon, and Northern Pass’s offer of relatively green, relatively cheap Canadian hydropower is one of the best available options. It would be a mistake not to pursue it.”

Not that long ago, that would have set off a prairie fire among the Globe’s political opponents in NH to line up against whatever the paper supported. But then again, who reads The Globe anymore?

Jim Rubens: The former state senator and noted anti-gambling activist makes it officials that he’s running for the GOP U.S. Senate nomination. So how do you think his role as a former consultant for the Union of Concerned Scientists plays in the primary?

Frank Guinta: The former GOP congressman looks like he’s all set to go for the rubber match against Carol Shea-Porter in the 1st C.D.

Chuck Rolecek: Add the name of the Manchester businessman and former Executive Council wannabe to the list of potential GOP gubernatorial candidates. At least this week.

Ed Engler: The president of The Laconia Daily Sun newspaper wins a three-way mayoral primary in the city, by a more than 3-1 margin over the second-place finisher.

It’s been making the rounds…

• Hoist by their own petard: The Legislature, in its infinite wisdom, stopped taxing Internet service, and now revenue from the telecom tax has hit the skids. The beauty part: They can’t do anything about it, since it would take a change in federal law.

• What’s in a name? The guy who testified before the special state commission on gambling enforcement – and called for separating licensing and enforcement operations – was named none other than Clyde Barrow. Does that mean he should know what he’s talking about?

• All the hesitation, mind-changing and general hesitancy among potential GOP gubernatorial candidates is paving the way for a Ted Gatsas run in 2014.

• A little fact-checking wouldn’t hurt: Not one of the news outlets that reported the Peter King “right now I’m running” story that went viral earlier this month bothered to mention the name of the “radio station” that he allegedly gave the scoop to. Probably because the “station” was Channel 9. You know, a TV station.