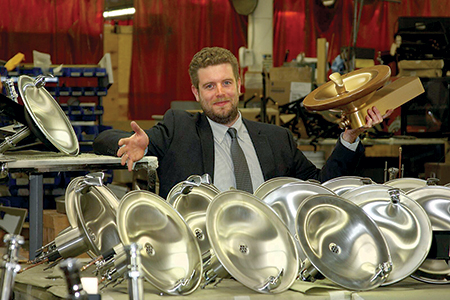 In addition to being Filtrine’s national sales manager, Hansel serves the community as a Keene city councilor and a member of the city’s Drug Addiction Solutions Task Force

George Hansel knows his family’s work. Because when your family owns a fifth-generation business like Filtrine Manufacturing Co. in Keene, you tend to grow up with it.

He spent summers working in the back on coolers that would go to doughnut franchises; he worked to sell the product that the company specializes in; he sat talking with the welders who he said are some of the most skilled in the world.

When he was growing up, Hansel didn’t always plan to work for his family’s company, though he said he can’t imagine being anywhere else now. He graduated from St. Lawrence University in Canton, N.Y., with a liberal arts degree and started the very next day.

Now 30, Hansel serves as Filtrine’s national sales manager. Together, his dad, brother and a couple of uncles, continue the work his grandfather started more than a century ago.

“It’s nice working with family,” Hansel said. “You come in and immediately have an impact.”

In 1918, Hansel’s grandfather Charles met George Kneuper, a German inventor, in Brooklyn, N.Y. Kneuper had invented a water filter that removed microscopic particles from water. Hansel, a civil engineer, worked with Kneuper’s invention to create an electric cooler to house the filtered water.

“(My grandfather) could see that this company had legs if someone knew how to sell it,” Hansel said.

The two made a plan to work together, creating the company that’s been around for over a century.

Over decades, it became a go-to brand for architects and designers to use, according to Hansel. To this day, they are still trying to vamp up the field, particularly in terms of designs.

Earlier this spring, Filtrine released a new drinking water fountain that Hansel said, as far as he knows, is the only one of its kind. The fountain, “inspired by wood found in New Hampshire and access to some of the finest furniture makers in New England,” as Filtrine’s website says, is made of bronze and encircled by cherry wood.

“We continue one with that innovative spirit,” Hansel said.

Giving back to the community

When Hansel finishes for the day at Filtrine, his work doesn’t end there.

He was elected to the Keene City Council in December 2015 to serve his first term as a councilor. He wanted to get involved because he believed that’s where he could have the most change as well as aid in bringing community visions and the city’s master plan to life.

“This is a very exciting opportunity that will help determine how the city develops over the next several decades,” he said.

As a member of the council’s Planning, Licensing and Development Committee – which handles things like code enforcement, economic development and conservation – Hansel said one of his main goals is to work at updating the city’s land use code.

“We have an opportunity to greatly streamline the process, making Keene a more attractive place for developers and new businesses,” he said.

Hansel, along with other city officials, has also been working to help address the heroin crisis in the region.

He is a member of the city’s Drug Addiction Solutions Task Force, which is made up of emergency responders, city government staff and school officials. It meets once a month to work on solutions to the crisis that has hit Keene, as it has so many other communities in New Hampshire.

Hansel said that among the possibilities has been expanding recovery-based services in the region. In November, he asked Holly Cekala from the organization Hope for NH Recovery to speak to the task force.

Juggling all these various projects at once, Hansel estimates he probably spends at least 10 hours a week doing something for the city.

‘Country on the weekend’

When not at work, Hansel has created a haven where he can keep busy but still relax.

He and his wife Katie own an old 12-acre berry farm in that they share with their two cats, two dogs and 15 goats.

“It’s nice to just be country on the weekend,” he said.

Having grown up in Derry and raised animals like chickens and quails, he’s used to having a lot of animals around.

Hansel said he first started to research raising goats after they bought the property and wanted to clean up the land.

“Goats are good at eating weeds and overgrown brush,” he said.

When Hansel first started looking into raising goats, he reached out to a woman in Texas, a renowned goat farmer and breeder.

He flew down after work, dressed in a suit. When he arrived at the car rental, he was told his car was a compact taxicab-yellow car.

“This was cowboy country,” he said.

The trip proved to be a success though – he ended up adopting two goats from her.

As for what comes next with his farm, Hansel said it’s still undecided.

“We’ll see,” he said. “I’ve got more than I can handle right now. I want it to be successful.”