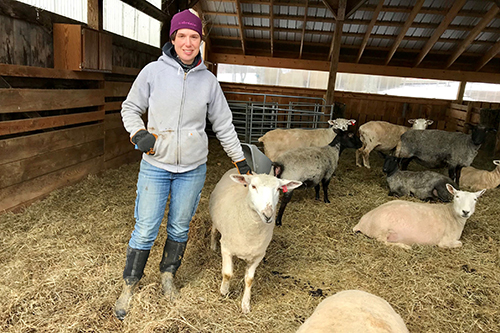 Kristin Canty, filmmaker, restaurateur, farmer and mom, has always been an advocate for farmers and a proponent of ancestral health and foods.

Here’s the story of their pasture-to-plate journey.

“When my son was 3 or 4, he was allergic to everything — grass, dust, animals. His compromised immune system, asthma and allergies contributed to hearing impairment, and the doctors just kept giving him medications,” said Canty. She believed there had to be a different way.

“I found out that kids who grew up on farms didn’t have allergies. I did more and more research and learned about the benefits of raw milk, even for adults,” Canty said. “The information was so compelling, I tried it myself in small doses, gave it to Charlie in small amounts, and little by little Charlie was cured.”

“We started buying into food groups and CSAs. I traveled around and saw the beauty in agricultural lands, the strong community of chefs, farmers and moms, a strong food culture,” said Canty.

Canty also learned the stories of small farmers who were producing healthy food for their communities who were forced to stop by the government, sometimes in violent ways — hence, in 2011, her movie, “Farmageddon: The Unseen War on American Families” was released.

“Farms were being raided. If Americans only knew. The farmers were not hurting anyone,” Canty said. 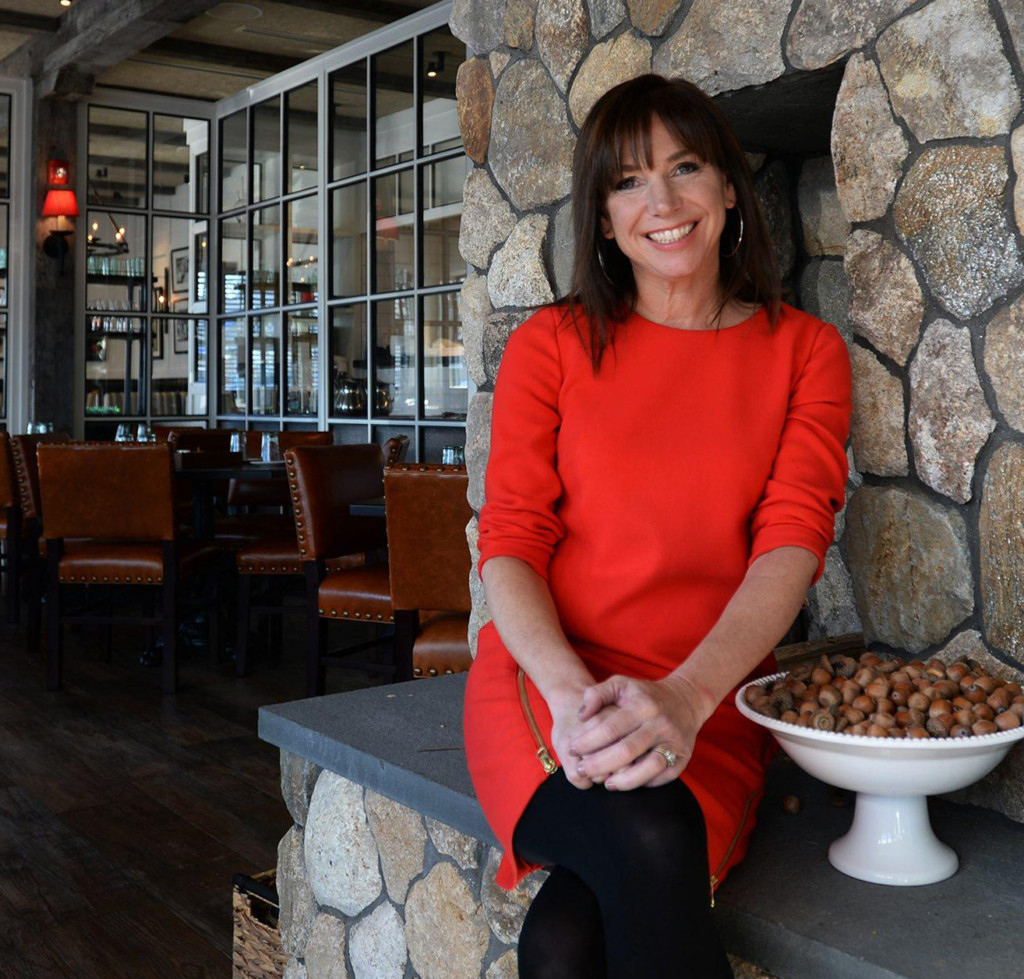 Being part of the food and farm culture, Canty said people were asking her to cook for them, to make something healthy.

“There was a strong food culture in my own town [Concord, Mass.] and I felt like I wanted a food truck, but the space turned into a restaurant,” said Canty.

She opened Woods Hill Table — organic, pasture-to-plate restaurant — in 2015, and Adelita — a taco and margarita bar — in 2018, with Woods Hill at Pier 4 in the works.

“We are more than farm-to-table. I think of farm-to-table as trending. We were asked to specifically locate at Pier 4 because of the push to be health conscious. We go beyond no soy, no canola oil — just butter, olive oil and pasture-raised beef,” explained Canty.

“People seem to be getting sicker and sicker, trying to heal themselves and not ingest toxins,” she added. The health of what we eat is so important, she said, which brings us to the Farm at Woods Hill.

“A farmer was helping me source foods for my restaurants and said I would not find enough locally to supply them the way in which I wanted,” said Canty.

So, Canty bought her own farm.

Canty bought the farm in 2013. She hired New England Genealogy and discovered, in fact, her family had owned the land. Clough (pronounced Clow, like plow), as in the name of the road where the farm is located, is Canty’s maiden name. The Woods family started the farm in 1794. Singer Patti Page married the next farm’s owner, Jerry Filiciotto.

“The Page family owned it for 20 or 30 years. They were the biggest maple producer in New Hampshire and tried to raise turkeys, too, but they couldn’t really make it. The farm’s name was Hilltop Farm. I changed the name because I didn’t want it to be confused with the Hilltop Steak House [the Saugus, Mass.-based restaurant chain], which has since closed,” said Canty.

“I grew up in the backwoods of Maine. My stepdad was a hunter. We ate raccoon, bear, beaver. My mom was a gardener and social worker. I went to Bowdoin College and studied environmental studies and visual art. I was always practical and hands-on,” said Reed.

Reed was a canoe guide in Maine, Minnesota, Quebec, Labrador and apprenticed at the Quivira Coalition — a nonprofit organization working with ranchers, scientists and environmentalists for the sake of the land and animals.

Practicality and being hands-on certainly helps in farm life. 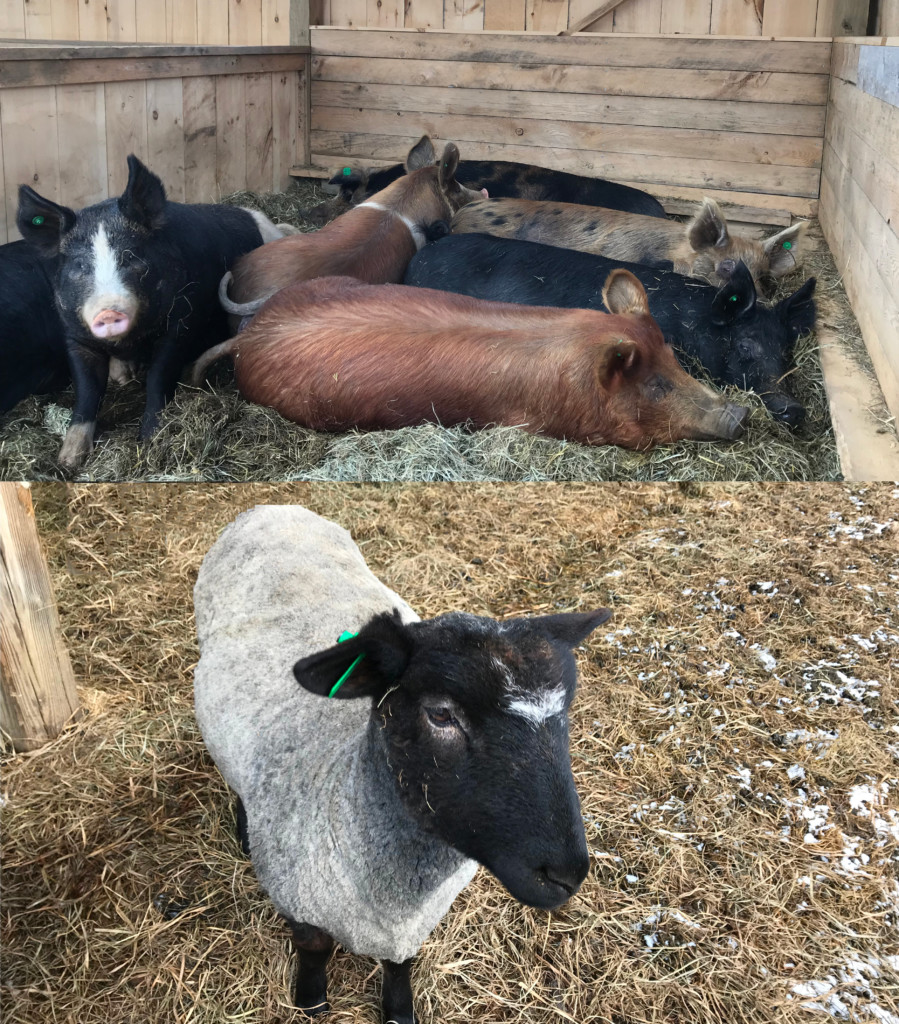 Top: The one boar at Farm at Woods Hill in Bath protects a pregnant sow while they rest. Bottom: One of the herd on a late winter’s day in mid-March. (Photos by Rachael Brown/ InDepthNH.org)

The farm practices holistic management planned grazing, which Reed says means they “keep track of how many animals graze on how many acres during the grazing season. We use that data to plan our grazing pattern for the following year. We re-plan constantly and change our grazing depending on droughts, rain, shade, forage, diversity and animal behavior.”

“We move the sheep and cows every day or two to keep them eating clean forage that is at an optimal point for consumption. We keep them from re-grazing and damaging plants that are trying to regrow,” she added.

The holistic farming has a positive impact on the land and animals, she said.

“The animals are outside and free to roam. Continued land regeneration, with animal and land health in mind — it is one way of farming,” Reed added.

The Farm at Woods Hill has an additional revenue source — lodging.

There are two hospitality buildings, the Lodge, a 3,200-square-foot log cabin overlooking a pond and the 19th century farmhouse, which are available for rent.

The properties are rented year-round, except during mud season.

“This is a nice place to stay to connect to food, a place for healing retreats from loss, from life-changing events and to learn about food production,” said Canty.

Speaking of food production, the Farm at Woods Hill produces and distributes.

“We are our own meat distributor. We take the meat to a local butcher. It is vacuum-packed and frozen in primal cuts. This means whole, like a whole shoulder,” said Reed, who said that by handling a lot of meat at once, it saves energy.

“We transport about 5,000 pounds to Massachusetts, and the drive can be a 14-hour round-trip,” she said.

Reed said that being raised humanely and butchered humanely makes for a happy animal.

“Our animals are given plenty of space to roam. They are animals being animals, a sheep being ‘sheepness.’ Our animals are happiness, and that is what we are eating,” said Canty.

This article has been published jointly by NH Business Review and the nonprofit New Hampshire Center for Public Interest Journalism, publisher of InDepthNH.org.