‘A lot of community feedback’ results in change of proposed location 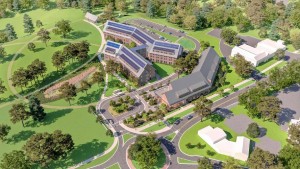 A rendering of Dartmouth College’s ‘apartment-style’ student housing on the west side of Lyme Road, near Hanover’s police and fire station. (Courtesy Ayers Saint Gross)

Bowing to neighborhood pressure but not giving up entirely, Dartmouth College unveiled a revised plan to build a student housing complex on Lyme Road north of downtown Hanover, a second try that nonetheless received a mixed reaction among area residents.

The new plan, which revises the original proposal Dartmouth floated last October would shift the location of undergraduate housing for up to 400 students from the east side of Lyme Road, on what’s currently the Garipay Field recreation area, to the west side of the road, at the north end of the former Hanover Country Club golf course and near Hanover’s police department and fire station.

“We’ve heard a lot of community feedback in the past several months,” Josh Keniston, vice president of campus services and institutional projects at Dartmouth, said in an interview with the Valley News, noting that the college had multiple meetings with neighborhood residents, faculty, staff and athletic groups that use Garipay Field for practice and recreation.

“What we heard was that, you know, maybe Garipay Field was not the right location,” he said.

Spacious and open, Garipay Field is a popular recreation spot for both the college and the community, used year-round for soccer in the summer to cross country skiing in the winter and — although technically prohibited — dog walking through all seasons.

The original plan, which the college put on hold in February following the faculty and staff protest vote, alternately weighed developing a parcel for student housing south of Garipay Field behind a grove of trees and homes where the Dartmouth golf team practices.

Like the original proposal, the new location on the west side of Lyme Road is designed to house 400 undergraduates in “apartment-style” units that would include individual bedrooms, a common room and a kitchen. The three-building complex would also serve as a “swing” space to accommodate students while the college embarks on an ambitious multiyear campuswide project to renovate undergraduate dorms.

Eventually, Keniston said, the complex could be converted into housing for 300 graduate and professional school students.

About three-quarters of Dartmouth’s approximately 4,000 undergraduates live in “residential communities,” a term that encompasses dorms, fraternities, sororities, “living learning communities” and senior apartments. And the college has traditionally billed the on-campus living experience, with its ready access to both class and non-class activities, as integral part of the student’s intellectual education.

But Dartmouth has also faced a yearslong housing shortage, forcing the college to adopt a shuttle housing system in which second-year students are in residence for “sophomore summer” in order to free up dorm space for freshmen, juniors and seniors during the other quarters. Historically, a slug of campus also became available as students flocked abroad for their junior year.

The pandemic upended the system, however, putting more pressure on the college to house students in Hanover.

The Lyme Road proposal is designed to appeal to those students, mostly third- and fourth-year undergraduates, who are willing to accept residing a 30-minute walk away from the green in the heart of the campus in exchange for what college administrators frame as more independent, apartment-style living.

Significant hurdles still lie ahead with the proposal for the college, however, not least of which will be persuading Hanover town planning and zoning officials that a three-building, 128-unit housing complex north of downtown built on a former golf course is compatible with the surrounding neighborhood.

Keniston said the goal is to begin again “engaging” with the community later this year and early next before moving on with submitting a site plan to the town and hopefully gaining the permits. Construction could easily go through 2024 and the goal is to have the complex ready for occupancy in the fall of 2025.

Barry Harwick, an alumnus and retired Dartmouth track and field coach who lives on Reservoir Road near Garipay Field, called the revised proposal “marginally better for the neighborhood, but for students who are going to live there, not better in any way, shape or form.”

Harwick cited increased traffic along Lyme Road from “shuttling 400 students back and forth all day” and how residing more than a mile from the heart of the campus would mean “those students missing the educational opportunities that other students are going to have to live on campus.”

Although Harwick contends there are other approaches to addressing the student housing shortage, some of them at sites in town the college has identified in the past, he believes Dartmouth’s plan is being driven by expedience over other considerations.

“I think that the reason they’re building this out there is that they want a flat piece of land that they already own that can be built on quickly,” he said.