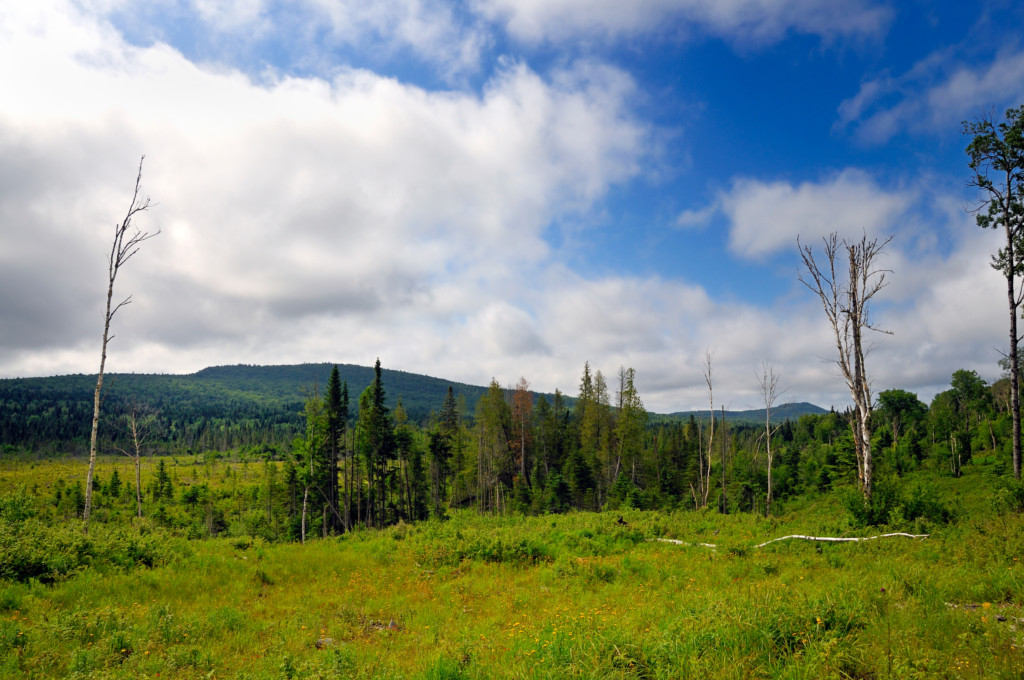 “Land conservation is a foundational issue,” says Bob Giuda, a Republican state senator from Warren who has twice proposed legislation to study the issue. “The conservation momentum has gone too far. There are great inequities. We need to figure out what’s going on here, but it’s an issue nobody wants to touch.”

Nearly three decades have passed since the New Hampshire Legislature last studied current use, the state’s most extensive land conservation program. At the time, the program was found to impose severe fiscal pressures on 44 municipalities, mostly small towns with large shares of acreage enrolled in the program and little commercial or industrial property.

But while the state continues to withhold funds and shuttle costs to cities and towns, local officials and state lawmakers have begun eyeing the fiscal impacts of land conversation in general and current use in particular on municipalities. Twice Giuda has sponsored legislation to study the issue without success. He is expected to renew his effort when the Legislature meets in January.

Chuck Souther of Apple Hill Farm in Concord, chair of the state Current Use Board, said the program becomes “something of a whipping boy” when pressure on property taxes grows. He expected controversy to continue as long as so much land is in current use and the state relies primarily on property taxation.

Property taxes fund municipal and county government along with nearly three-quarters of the cost of public education. Exemptions, deductions and credits against property taxes provide benefits to the blind, deaf, disabled, elderly and veterans, as well as owners of alternative energy systems. And current use taxation taxes forest, farm and idle land at a discount. These claims against property taxes represent tax expenditures — it is as if the taxpayers receiving the benefit paid taxes at the same rate as other taxpayers, but then received a payment, funded by their fellow taxpayers, equal to the benefit.

Three-quarters of the land property of the state —  4,341,930 of the 5,742,659 acres — is taxed at a discount or not at all, according to the most recent Current Use  Report compiled by the state Department of Revenue Administration. Land enrolled in current use, the most extensive conservation program, covers 3,008,456 acres — more than half the state — and about $6 million of the $3.6 billion in property tax receipts are paid on it. 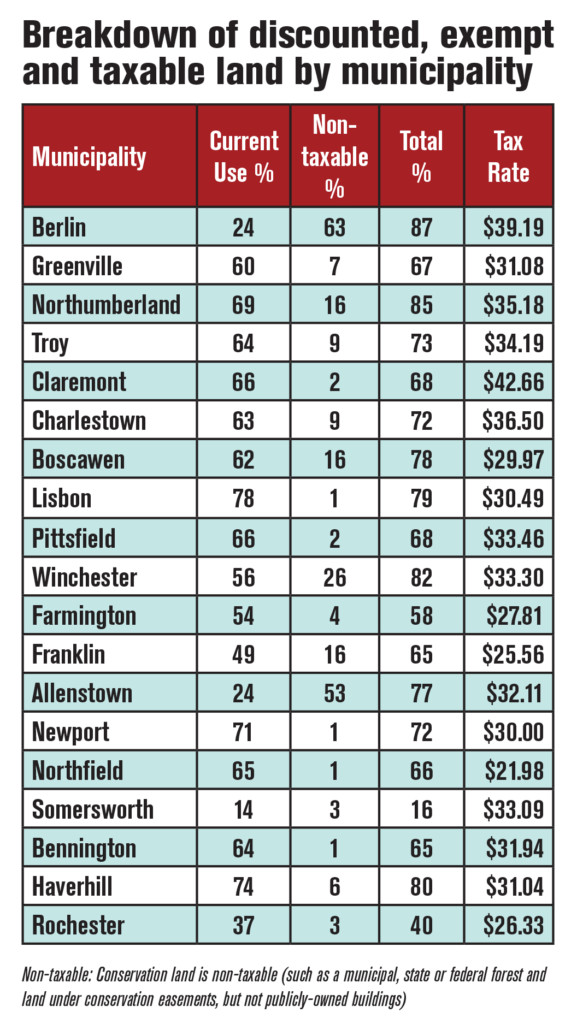 Another 1,333,473 acres, owned either by the state, municipal and federal governments or nonprofit  corporations, is categorized as “conservation land non-taxable.”

Together, this acreage covers 75.61% of the state and, discounting other federal, state, county and municipal property, represents an even larger share of otherwise taxable land.

The current use program assesses forest, farm and idle or unproductive land at its current use rather than ad valorem, or fair market, value. Undeveloped parcels of at least 10 acres qualify for current use assessment. Forest covers 2,623,405 acres, or 87%, of the land in current use. The 204,353 acres of farmland account for 7% of the total and 180,698 acres of unproductive land and wetlands make up the balance.

In addition, cultivated plots of any size generating documented annual income of $2,500 from the production and sale of agricultural or horticultural produce also qualify.

Each year, the Current Use Board sets a range of values, using the income capitalization approach, which local assessors apply to parcels enrolled in the program as well as to land protected by conservation easements. The DRA calculates the ranges for forest and idle land while the Cooperative Extension Service of the University of New Hampshire does the same for farmland.

When the Current Use Board met in June, Rusty Keith, a former selectman from Lyme, asked about the formula used to calculate the rates. The minutes record show he was told “the formula is property of the Department of Revenue Administration and has been deemed proprietary information by the DRA and confirmed by the Attorney General’s Office and therefore is not available to the public.”

The assessment ranges set by the board are subject to legislative oversight through the rulemaking process, which requires their approval by the Joint Legislative Committee on Administrative Rules, or JLCAR. Earlier this year, the board began exploring whether it could skirt JLCAR in setting the assessment ranges. DRA’s legal counsel suggested the state’s current use statute would entitle the board to bypass the rulemaking process; an attorney for JLCAR countered that a statutory change, exempting the board from the Administrative Procedures Act, would be required.

Souther said only that the board had recently begun discussing the issue and was in the process of seeking legal opinions. He stressed that no changes to the remainder of the process, including the three annual public forums, were being contemplated.

They have found that assessment methods are “subject to manipulation,” even “fundamentally flawed.” Assessments may not consider that the value of farm and forestland rises with its proximity to developed areas and diminishes its distance from them. Or the values of the components, especially discount rates, used to capitalize the net income stream from the land may be arbitrary or distorted. And they emphasize the importance of a fully transparent assessment process.

Farmland is assessed at between $25 and $425 per acre. The location, character, quality and productivity of the land are weighed in calculating assessed values. In a memorandum, the DRA advises that “each town may assess Current Use farmland anywhere in the range of $25 to $425 per acre depending upon the value they feel town farmland holds and what the taxpayer can bear per acre valuation.” Neither the current use statute nor rules suggest assessments can be tailored to the wherewithal of the taxpayer.

Those whose property is assessed at the top of the range may invoke the Soil Potential Index, or SPI, a scale of zero to 100 set by the county conservation district that reduces the assessment, by multiplying the difference between the top and bottom of the range by the SPI and adding back $25.

Forestland is broken into three categories according to the type of trees — white pine, hardwood and all other species — representing the majority of the stand.

Within the ranges, assessed values vary with the productivity and accessibility of the stand.

Unproductive land and wetlands are assessed at $23 per acre. If land in current use is not posted but open to recreation — hunting, fishing, hiking, skiing, snowshoeing and sightseeing — it qualifies for an additional 20% reduction in assessed value.

When land enrolled in current use is put to a use contrary to the requirements of the program, a penalty is imposed in the form of the Land Use Change Tax, or LUCT, of 10% of the “full and true value” of the property when the use changes. In 2015, 2,477 acres were withdrawn from the program and $5,019,066 was collected in LUCT.

Slowing the pace of land development, conserving natural resources, preserving aesthetic landscapes, and sustaining commercial agriculture and forestry represent significant economic and public benefits. But they are not without costs.

Of these, the most significant is the revenue foregone from landowners whose property is assessed at preferential values and rates. To maintain levels of public spending, local governments raise the tax rate levied on all taxable property, offsetting the loss of revenue by shifting a share of the tax burden from qualified landowners to residential and commercial property owners.

The portion of the tax rate attributed to land conservation is not reported but obscured in the process of setting the rate. As a speaker at a 2017 current use public forum in Claremont said, “I know you base the current use value on the income-producing capability of the land and not market value. [By measuring] it against market value, because I think you should, [it provides] transparency for the taxpayer as to what kind of discounts we are affording and benefits we are giving to current use landowners that the taxpayers are having to pay for.”

The fiscal impact of current use varies from one municipality to another with the extent of acreage enrolled in the program.

In 2016, land enrolled in current use represented more than half the acreage in 15 of these municipalities while the total of current use and non-taxable conservation land exceeded 60% in 16 of the 19. Allenstown, Berlin and Winchester are homes to state parks, and some 24,000 acres of the White Mountain National Forest lie in Berlin.

A number of states reimburse municipalities under their current use programs, including Vermont, where some $16 million was distributed to municipalities in 2018. In 1992, when 40% of land in New Hampshire was enrolled in current use, offsetting or mitigating the fiscal impact of current use on municipalities was the study committee’s highest priority. While the panel acknowledged some compensation was necessary, especially for the 44 municipalities most severely impacted, there was no consensus about how to fund the estimated $18 million reimbursement.

Keith has suggested introducing a statewide current use tax, akin to the statewide education tax, to distribute the cost of the program proportionally among all municipalities. He noted that current use is a state program, governed by state statutes and rules, with the declared purpose “to encourage the preservation of open space, thus providing a healthful and attractive outdoor environment for work and recreation of the state’s citizens, maintaining the character of the state’s landscape, and conserving the land, water, forest, agricultural and wildlife resources.”

He estimated that a flat surcharge of less than a dollar on every municipal tax rate would defray the statewide cost of current use.

“I’m not opposed to the purpose of the program,” Keith said, “but I believe the cost of current use should be transparent to property taxpayers and shared proportionately among cities and towns as the constitution requires.”

England and Anderson have called for tightening the eligibility requirements for current use programs. For instance, unlike New Hampshire, many states require farmland to generate a specified and documented amount of annual income from agriculture or animal husbandry to qualify for current use. Likewise, many states require rather than encourage stewardship of forestland, while in New Hampshire stewardship is encouraged by assessing unmanaged forest at higher values than managed forest. They also favor stiffer penalties when land is taken out of current use. Some 30 states have “rollback” provisions, entitling the state to recapture deferred taxes with interest from between three and 10 years when land no longer qualifies for current use.

As the 2017 public forum in Claremont closed, one resident noted that “frustration has been expressed by those in attendance toward what they feel is a very flawed tax structure in New Hampshire that creates a tremendous burden on towns.”

Earlier, Steve Hamilton, then chair of the state Current Use Board, had remarked that “New Hampshire has a property tax system that generally treats everyone the same.” Hamilton went on to become Claremont’s interim assessor.