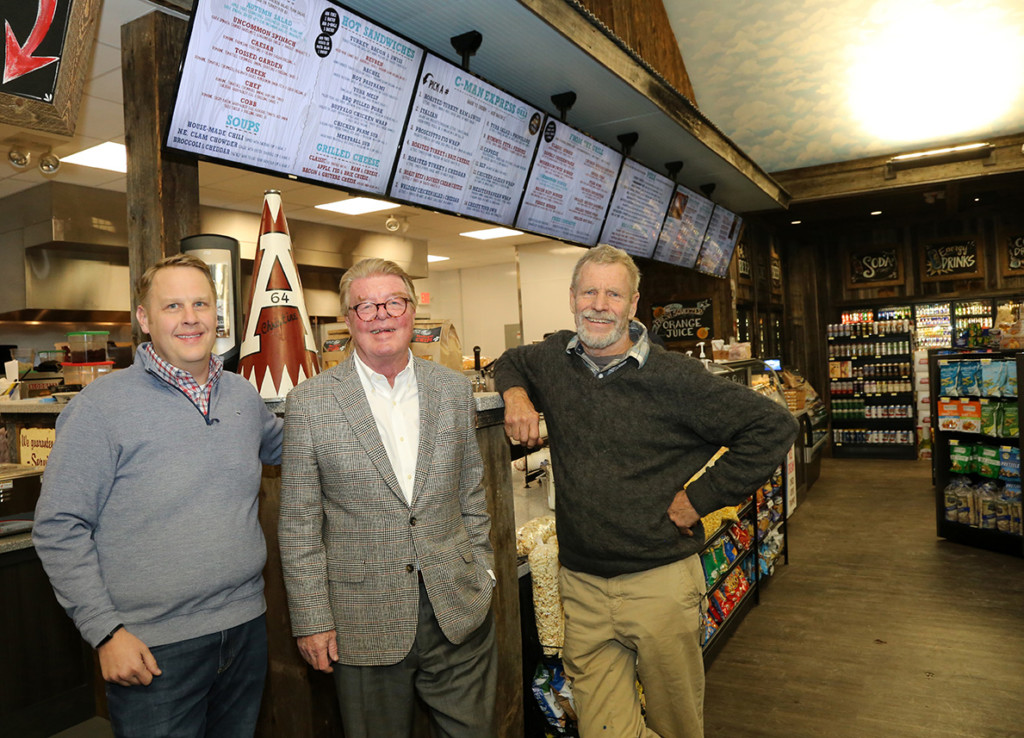 Alex Ray, 74, sometimes talks as though he is ready to pack it in as the ever-enterprising Earl of Eateries in New Hampshire. But he is not resting on the laurels he has earned as founder of The Common Man family of restaurants, which includes 16 restaurants and two hotels, as well as the shops, restaurants and general stores he and partner Rusty McLear have at the Hooksett Welcome Center off Interstate 93. That was a public/private partnership that Ray is proud to say has worked out well for the state as well as the private entrepreneurs.

“The old rest areas were costing the state a million dollars a year. Now they’re receiving a million a year in profit. That’s a swing of $2 million.” That’s not counting the revenue from the expanded liquor stores on each side of the highway and all the promotion and marketing seen on the TV screens in each area for travelers headed north or south.

Now Ray, McLear and a returnee to New Hampshire named Bard Pernaw have something new again in the form of the Common Man Roadside Restaurant and Deli.

Within a week of opening the first one in Plymouth, they were breaking ground on a second one in the south end of Manchester. There is no telling what Alex Ray might do when he decides he is no longer old and nearing retirement.

In a nutshell, the Roadside Deli is a restaurant within a convenience store. The exterior is similar to the Common Man restaurants at the Hooksett Welcome Centers, resembling a renovated mill building. Inside, one finds a restaurant featuring an open kitchen where food is freshly prepared and promptly served — “Real food, Real fast,” as the motto goes.

There are also barista sections for coffee and a wide offering of beverages. And, as at the Welcome Center in Hooksett, each deli/restaurant has gas pumps out front where motorists may fuel up and be on their way.

‘Every day is different’

The uncommon force behind it all is a man of many moods to go with his many enterprises, and one might easily find him talking about his misspent life, building restaurants and making a fortune instead of spending more time with his wife and kids. Then he might tell you how tired he is of spending all the time of his life at his businesses and how he doesn’t want more years in his life, but “more life in my years.” Does he own his restaurants or do they own him?

He would like to keep the business in the family, but neither of his two children, both daughters, are looking to inherit a business that runs from Plymouth to Windham and Claremont to Portsmouth. The unexamined life is not worth living, and sometimes when Alex Ray examines his life he seems inclined to give it a failing grade, despite all his worldly success. At other times he feels like a kid again. Just ask him how many hours a day he works, both on the road and at his many different enterprises.

“I say I work about two hours a day, doing the things I don’t like. The rest is a pleasure.”

What are the things he doesn’t like? All the regulations, compliance rules, red tape, appearances before planning boards and zoning boards of adjustment, the paperwork and so forth, he will tell you. If he can actually limit all that to an average of two hours a day, he is truly blessed. The rest of the time he spends on the details in and around his various enterprises.

“I micromanage,” he admits, which is quite a chore for a man who has about 1,200 to 1,500 capable people working for him. And it’s not as though they don’t know the operations. At his various restaurants, the oldest of which is nearly 49 years old, he likes to say to the staff, “‘Raise your hand if you’ve been here 40 years; if you’ve been here 20 years.’ We have very little turnover.”

Brad Pernaw, 39, worked for Ray at Twin Docks in Meredith when he was 16 years old. Later, he went into real estate and business development and was living and working in Chicago when he and his wife were expecting their first child. He decided New Hampshire was where he wanted to settle again, so he called Ray for an opportunity to return to his native state and help him with his ever-growing enterprises. He became a partner with Ray and McLear in the Hooksett Welcome Centers on I-93. Now he’s the third man in on the Roadside Delis.

So what can he tell you about what it’s like to work for and with Alex Ray?

“Every day is different. He’s very energetic, very down to earth. He cares about every detail that goes into an operation. Then at the end of the day he believes in doing good, supporting people less fortunate in the state and throughout the country and the world, going to help victims of hurricanes and other devastating things. Alex has been instrumental in building veterans housing in Plymouth. He’s a much better than average corporate citizen.”

Most people already know about Alex Ray’s philanthropy, how he picks up and moves to wherever disaster has hit, such as New Orleans during Hurricane Katrina in 2006 or Puerto Rico a couple of years ago or, quite recently, the Bahamas. The seemingly ageless Ray heralds the year of his birth, “1945,” as though he were there for the surrender of the Japanese on the deck of the USS Missouri. Had he been around at the time, Ray would no doubt have been cooking for and serving survivors in Hiroshima and Nagasaki. 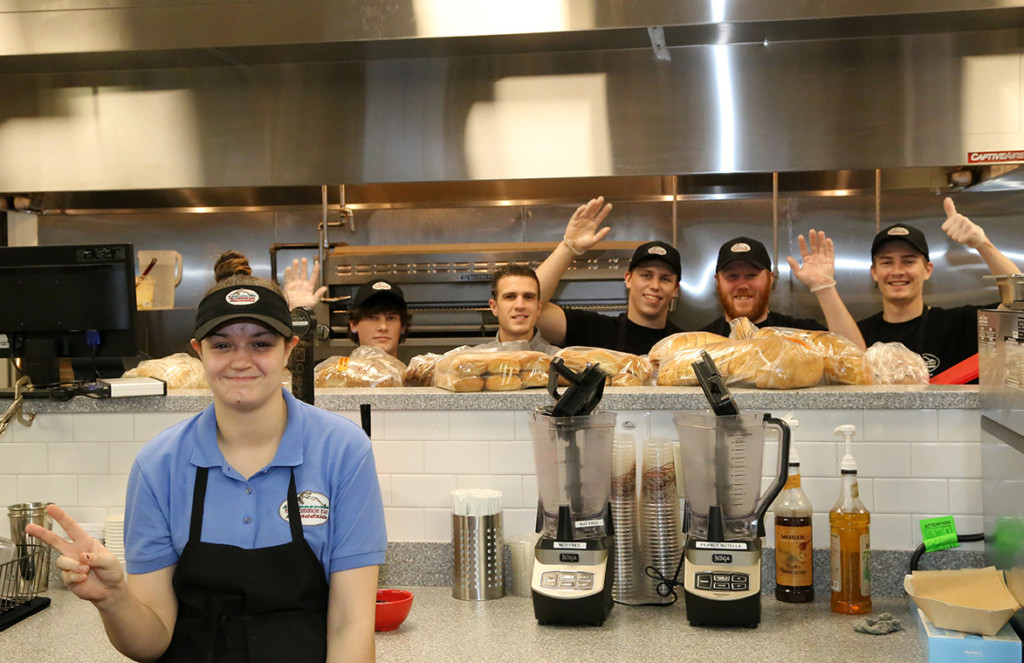 The kitchen crew waves in the midst of a busy day at the restaurant. (Photos by Allegra Boverman)

He is also the founder of the Flying Monkey Center for Performing Arts in Plymouth and the drug and alcohol recovery center that would later become the Franklin home of the Manchester-based Farnum Center. Not everyone knows, however, that workaholic Ray had a heart attack at age 33 or that he has often come to regret how his devotion to his business ventures kept him from becoming the devoted family man he now believes he should have been.

In Ashland, he still has the original Common Man restaurant, founded in 1971, which is also his personal favorite. (“My wife and kids and I lived upstairs.”) In Plymouth alone, there is another Common Man restaurant, the Italian Farmhouse, a function facility called the Barn on the Pemi, the aforementioned Flying Monkey Playhouse, and now the Common Man Roadside Restaurant and Deli. Is that all? Maybe not, but sometimes even Ray can’t remember them all.

He is bold and innovative and enjoys being a man who marches to his own drummer. But if Alex Ray is the Lone Ranger, he does not go far without Tonto.

“We would take our vacations together, which were spent looking at different hotels. We went all over the Caribbean, San Francisco, Rome, Paris, the Amalfi Coast, all over,” said his longtime business partner McLear, who is best known for his Meredith properties, most notably the Inn at Mill Falls, which he sold earlier this year for “way north of” $25 million.

“We enjoyed the heck out of traveling and in literally every place we visited we got some idea that we used here.”

McLear, 73, has had a somewhat more conventional lifestyle than the ever-restless Ray. Though once divorced, his recent marriage to longtime partner Jody has fulfilled a pursuit arguably more rewarding than those of a commercial nature. His children number three, two boys and a girl, and all have well-defined careers of their own — in academia for his Ph.D. sons, while his daughter has made her own way in the business world, as the proprietress of a coffee shop in distant Revelstoke, Canada.

While Ray never took to academic pursuits, McLear went to the University of Notre Dame until his pursuit of pleasure outran his academic interests. He eventually finished college elsewhere and made his way into the hotel business even before he met and teamed up with Ray in the hospitality industry. While he sold his Meredith enterprises, he remains partners with the Common Man founder in the Hooksett Welcome Center and the Common Man Hotel and Restaurants in formerly abandoned mill buildings in Claremont. And now, of course, they are joined together in the Roadside Deli enterprise.

“I don’t think Rusty and Alex sit still for very long,” said Mike Somers, president and CEO of the New Hampshire Lodging and Restaurant Association. “They’re a couple of great guys and a lot of folks like you and me wish them well. We’re always impressed with the quality of the product they put out.”

Their temperaments are not the same, and the duo may be regarded as the yin and yang of the New Hampshire hospitality industry.

McLear does not believe he was overextended in all his endeavors, but appreciates the fact that he now has more time for other things. Ray still doesn’t.

“When Alex sees an opportunity, he goes at it 20 hours a day,” says McLear. 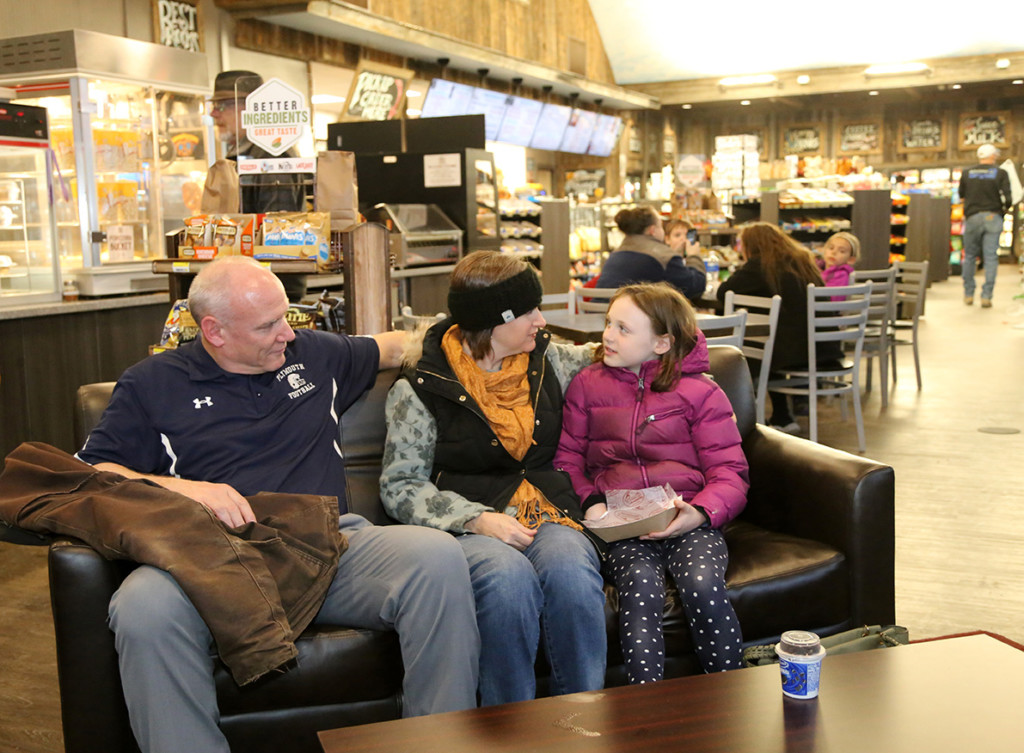 The restaurant provides lots of choices for a meal. From left: Bob Price, Patricia Rella and their daughter Josey Price, 9, all of Campton, have a sandwich before seeing a musical that evening.

Politically they may not see eye to eye, but neither man has had much time for politics. McLear sees himself as a “moderate Republican,” while Ray remains independent with an affinity for liberal causes — a peculiar tendency, perhaps, for a man who became a major corporate figure despite his youthful inclinations.

“It is difficult and funny to me after trying so hard not to be part of the corporate world,” said Ray, who feels he is now “half one thing and half another.”

At an age when many people are several years into retirement, and with enough money to live in luxurious idleness, he still has the restless energy that keeps him pursuing one dream after another.

From his high school days in Conway, where his indifference to academic pursuits left him something of a fish out of water, to his days working in and managing the kitchens of Sanders Associates (now BAE Systems), where he chafed under corporate guidelines, Alex Ray has become his own kind of corporate man. Whatever his musical tastes might be, he has been living out the Frank Sinatra anthem of a man who has done things “My Way.”

Not everyone can do that. It takes a strong will, a lively imagination, a loyal following, a load of talent and the courage to take bold risks. And, yes, one more thing that McLear is happy to note.

“We have both been, frankly, pretty darn lucky.”