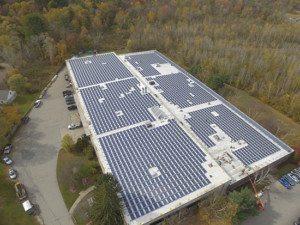 ReVision Energy installed this 793.1-kilowatt array in the fall of 2019 at Filtrine Manufacturing’s facility in Keene. (Photo by Joey Freeman/ReVision Energy)

A Colorado company wants to build a solar farm in Bow to go with the 11 arrays it is building in other parts of New Hampshire, and it hopes to do many more, despite the state’s reputation for being less welcoming to the industry than the rest of New England.

“There’s always a benefit to being a first mover,” said Brandon Shenfield, investment manager for the Denver-based firm GSSG Solar, explaining why it has targeted New Hampshire rather than solar-friendly states like Vermont and Massachusetts. “If there are too many in a market it creates different challenges (and) a company of our scale cannot be competitive.”

The proposed Bow solar farm would take up about 5 acres on Ferry Road and would produce a little more than 900 kilowatts at full blast, the amount needed to power roughly 800 homes. The company is “actively soliciting” customers to buy the power, “ideally some credit-rated company in the footprint of Unitil,” the local utility, Shenfield said.

GSSG, which also has a corporate office in Tokyo, has financed or overseen hundreds of solar installations around the world but only recently entered New England. It has targeted just New Hampshire and so far has overseen solar farms from Conway to Nashua, including one in Loudon. This will be its first project in Unitil’s service area.

All its projects in New Hampshire have been similar, around the size of 1 megawatt, or 1,000 kilowatts servicing one or a couple of customers, known as “off-takers,” and taking advantage of recent changes in a state law that have made such community solar projects more viable.

While these are significant for New Hampshire, the projects are small compared to neighboring states, where solar arrays of 20 to 40 megawatts are becoming common.

“It’s been a little more challenging market from an economics perspective. One megawatt projects are very challenging. Any little bump in the road tends to derail them,” Shenfield said.

The land, about a mile north of the Merrimack Station power plant, is owned by Manchester-based Keller Products, which has a factory producing plastic products in Bow. GSSG is leasing the property from it.

New Hampshire has the smallest amount of installed solar power of any New England state. The Solar Energies Industry Association estimates that at the end of 2021 the Granite State had about 165 megawatts installed, compared to almost 400 in Vermont, 440 in Maine and 3,600 in Massachusetts, which has long encouraged solar power through rebates, taxes and regulations. Even Rhode Island, where land is at more of a premium, has far more than New Hampshire: 555 megawatts.

The state’s solar generation may finally catch up, as recent changes in laws and the federal government’s support have made more types of solar farms financially viable here, as reflected in last week’s decision by voters at Hopkinton town meeting to put a solar array in a town-owned gravel pit on Clement Hill Road so taxpayers can benefit from the cheap electricity.

If all approvals are met, Shenfield said, construction in Bow could begin later this year. The solar arrays will be single-tracker systems, which can adjust as the sun’s position changes during the year, mounted on the ground.

“We see growth potential and hopefully local communities will continue to support us. We would love to double our portfolio (in New Hampshire) by the end of 2024,” he said. “It depends on where equipment prices go. Covid resulted in many manufacturers pausing or exiting the industry. A lot of them have since restarted operations and a lot of new production has been planned to come online, but the need for solar has really never been stronger and demand continues to outstrip supply.”