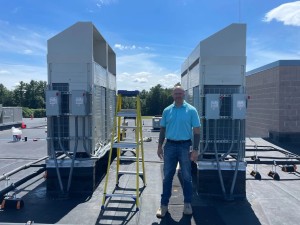 Brian Sands, director of facilities for the Pelham School District, stands in front of a unit for the school’s new air conditioning system. (Mara Hoplamazian/NHPR)

He and his classmates guzzle water and gather in front of a standing fan. His teacher draws the window shades and turns off the lights to cool down the room. But still, Chase says his brain feels like mush.

“It’s uncomfortable. And it’s hard to focus, because you’re just focused on drinking water and trying to stay cool,” he says.

Severe heat can pose more health risks to little kids, who don’t regulate their body temperatures as well as adults. And there are academic consequences too.

“When you’re 80 degrees out on your body or in the room and you’re trying to learn, that’s a tough, tough situation,” says Jessica Van Vranken, the principal at Pelham Elementary School.

With climate change, students and teachers in New Hampshire are going to experience more hot, humid days and longer heat waves. Climate scientists say that in a scenario where we continue to rely on fossil fuels, the state could see 50 to 60 days above 90 degrees each year by the end of this century. And like much of New Hampshire’s public infrastructure, schools aren’t prepared.

Few buildings have air conditioning systems and many districts say that installing them would be cost-prohibitive. For years, the price tag prevented Pelham Elementary School from installing AC. But this year, that changed.

In an unprecedented boost, the federal government has sent billions in Covid relief aid to public schools. The money can cover a variety of expenses – from air handling and filtration systems to extra staff to help students catch up on academics. Pelham decided to use some of it for AC in the elementary school cafeteria and in 26 rooms on the second floor.

This summer, a contractor reinforced parts of the elementary school roof to hold the heavy units. Crewmen ripped open ceilings to install new parts. And for weeks, wires and cables hung from the ceiling. Staff nicknamed the project “the octopus.”

But with air conditioning, the expense doesn’t stop at installation. 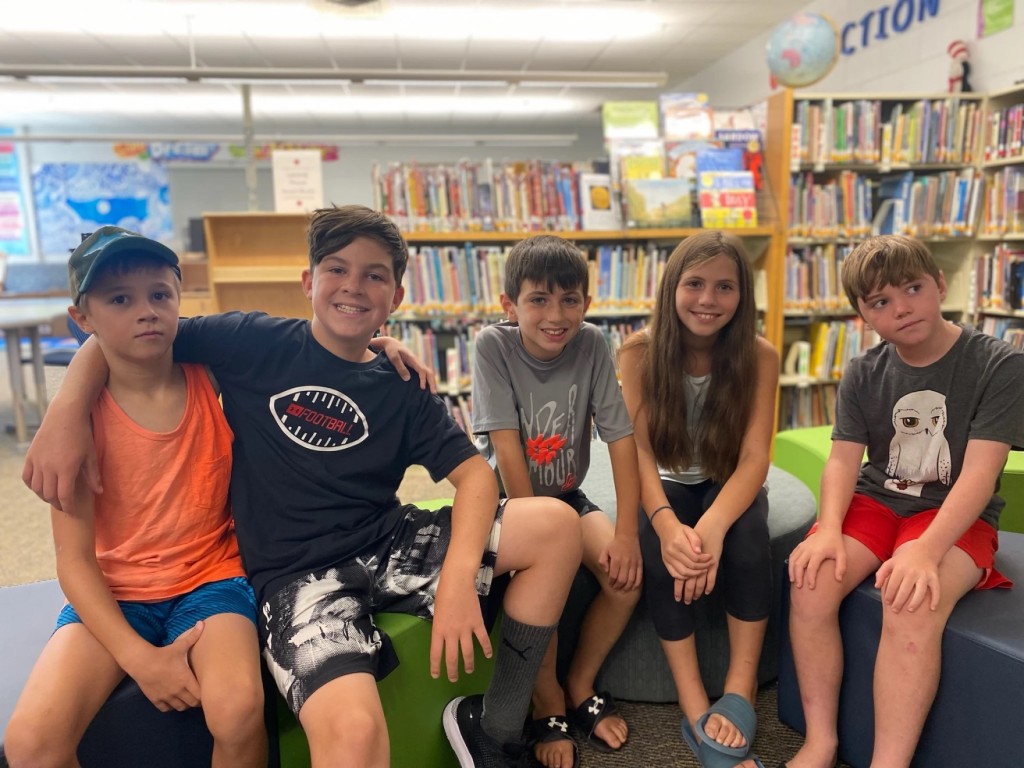 Pelham students gather in the elementary school library, which was one of the only areas that had AC until a major upgrade this summer. From left to right: Jack Ingraham-Wilhelm, Chase Bressette, Peter D’Antonio, Arianna D’Antonio, Sam Ingraham-Wilhelm (Sarah Gibson/NHPR)

Higher temperatures mean more frequent use of AC, and in turn higher costs – and demands – for electricity. The Pelham school district estimates that its electricity bills will increase by about 10 percent this year, in part because of the new AC system. Some school board members are eyeing solar panels as a potential long-term solution to these costs.

By some measures, Pelham Elementary School was an easy candidate for AC. It’s only 20 years old – significantly younger than the majority of public school buildings in the state, according to the NH Department of Education. Younger buildings are often easier to retrofit with additional pipes and ductwork.

Pelham superintendent Chip McGee sees AC as a climate change investment: a big expense up front, but necessary in the long run.

“When I first got here, I didn’t think we should entertain air conditioning for what ended up being, you know, two or three days on either side of the calendar,” he says.

But students and teachers started using buildings in the hot months for summer school and clubs, and summers continue to get warmer. So McGee had to reassess AC.

“In the last 20 years I’ve been in education in New Hampshire, I’ve changed my opinion,” he says.