Chances for prosperity are uneven across state 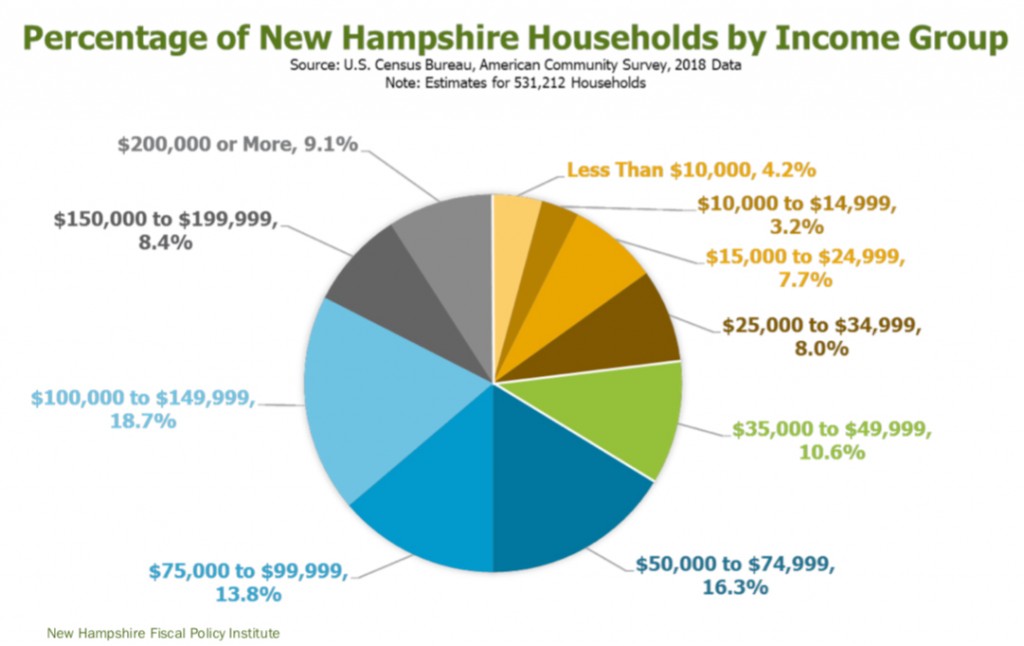 Disparities in prosperity and opportunity in New Hampshire was the theme of the NH Fiscal Policy Institute’s seventh annual conference, held Feb. 21 at the Grappone Conference Center in Concord.

“Access to opportunity is uneven across New Hampshire,” said AnnMarie French, NHFPI’s executive director, in her opening remarks. “This may be based on income, location and the ability to access the foundational pillars of well-being such as housing, healthcare and educational opportunities.”

The conference opened and closed with two presentations by Phil Sletten, NHFPI’s policy analyst. Drawing on the most recent data from the U.S. Census Bureau, he began by tracking the state’s demographic and economic features, highlighting the differences among the 10 counties. He concluded by turning to the major disparities between the state’s 13 cities and 221 towns, presenting the data in color-coded maps.

The presentations were supplemented by Kevin Peterson of the NH Community Development Finance Authority (CDFA), who unveiled a set of “Community Progress Indicators,” developed in partnership with NHFPI. The indicators incorporate 13 indices providing profiles of all municipalities. And Evelyn Aissa, executive director of Reaching Higher NH — who stepped down from the job shortly after the event — presented an analysis of the impact of the character of communities on the learning process and academic performance of its schoolchildren.

A panel consisting of Ben Frost of the NH Housing Finance Authority, Ann Landry of the NH Department of Health and Human Services and Michael Turmelle of the NH Charitable Foundation addressed the challenges of ensuring equitable access to housing, healthcare and education. 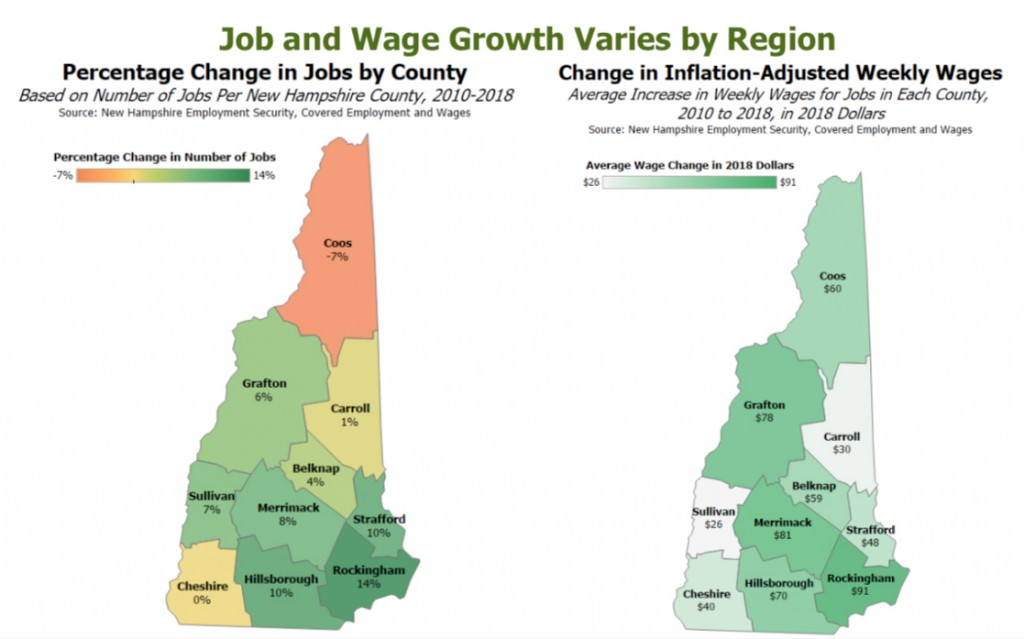 As drawn by Sletten, the demographic and economic profile of the state bears the imprint of proximity to metropolitan Boston.

These same four counties accounted for the lion’s share of the state’s population growth between 2010 and 2018, when their numbers rose by more than 40,000. Among the remaining six counties, the populations of three — Belknap, Carroll and Grafton — grew by 2,225 while numbers in the other three — Cheshire, Coos and Sullivan — shrank by 2,687.

Altogether, the population is growing slowly and aging rapidly.

Since 2010, the natural increase of births over deaths has steadily dwindled, and in 2017 reversed itself as migration from other states and foreign countries has accounted for all growth. Between 2010 and 2017, the number of those 18 and younger has shrunk by nearly 30,000, those between 18 and 44 has risen slightly, and those between 45 and 65 has fallen slightly, while those 65 and older has jumped by 60,000.

The declining birthrate has contributed to the closure of maternity units at eight of the 13 hospitals north of Concord since 2002.

According to the NH Department of Employment Security, the same four counties paced the growth of employment. The number of jobs increased 14% in Rockingham, 10% in Hillsborough and Strafford, and 8% in Merrimack counties, compared to 7% in Sullivan, 6% in Grafton and 4% in Belknap counties. Employment rose 1% in Carroll County, remained flat in Cheshire County and dropped 7% in Coos County.

Likewise, job growth was closely mirrored by the average increase in weekly wages, which rose by $91 in Rockingham, $81 in Merrimack, $70 in Hillsborough and $48 in Strafford counties. Only Grafton and Belknap counties, where wages grew by $78 and $59, posted comparable wage increases, while increases in other counties ranged from  $26 in Sullivan County to $60 in Coos County. 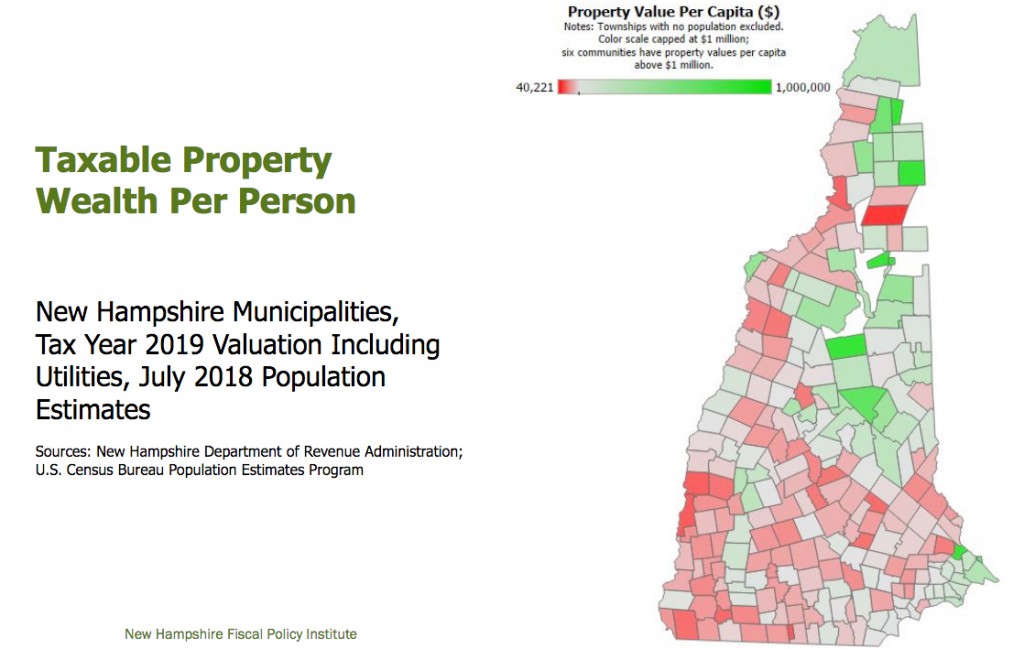 The poverty rates of 5% in Rockingham, 7% in Merrimack and 8% in Hillsborough hovered around the state rate of 7.6%, the lowest in the country. Stratford County joined Carroll, Grafton and Cheshire at 10% while the highest rates were in Cheshire County at 11% and Coos County at 13%.

The poverty rate was highest among households headed by a single woman with children, at 35%. And among ethnic groups, Latinos and African Americans accounted for the highest poverty rates approaching 20%, while the median household incomes of these same groups were $15,000 to $20,000 less than the $70,000 of white households.

The acute shortage and high cost of housing is common throughout the state, according to Sletten.

“We need 20,000 new housing units today. It is a crisis of historical proportions,” said Frost.

He dismissed the notion that housing development increases school enrollments and with them property taxes as “myth” and pointed to local zoning decisions as constraints on development. “It’s a difficult conversation, but one we have to have,” he said, declaring “Yes, in my backyard.”

According to Turmelle of the Charitable Foundation, “education can be the great equalizer.” But because of the strong relationship between household income and educational achievement, the opportunity gap opens early and widens by third and fourth grades, which are critical for developing reading and math skills.

NH Tomorrow, a program of the Charitable Foundation, has committed to investing $100 million over a decade to address the challenge, he said.

Aissa of Reaching Higher NH echoed Turmelle’s remarks by referring to “The Whole Picture of Education in New Hampshire,” a report by her organization, that uses 30 municipal, state and federal datasets.

The report found that the major factor bearing on the academic proficiency of public school students, especially proficiency in reading and math, is relative affluence, reflected directly by their family’s income and indirectly by the educational attainment of their community and the salaries paid to their teachers.

Together, these statistics reflect the fiscal capacity of the state’s 234 municipalities as well as some of the challenges they face.

The seven indicators are transposed onto a map where each municipality is shaded to represent its deviance — above or below — from the statewide equivalent of each indicator. For instance, on the map, the town of Sunapee is clear, indicating that its positive indicators match or exceed and its negative indicators fall below the statewide equivalents, while Newport, next door to the west, is shaded the darkest to indicate the opposite.

“Opportunity and mobility may be limited in communities with limited ability to invest in themselves,” said Sletten.

But the event’s keynote speaker, Pawn Nitichan, executive director of City Year NH — who came to New Hampshire from Thailand — said all is not lost. She traced her success to the support, mentoring and opportunities afforded her by those she has met here.

”I believe that together we can make New Hampshire an even more wonderful place, not just for some of us, but for all of us,” she said.