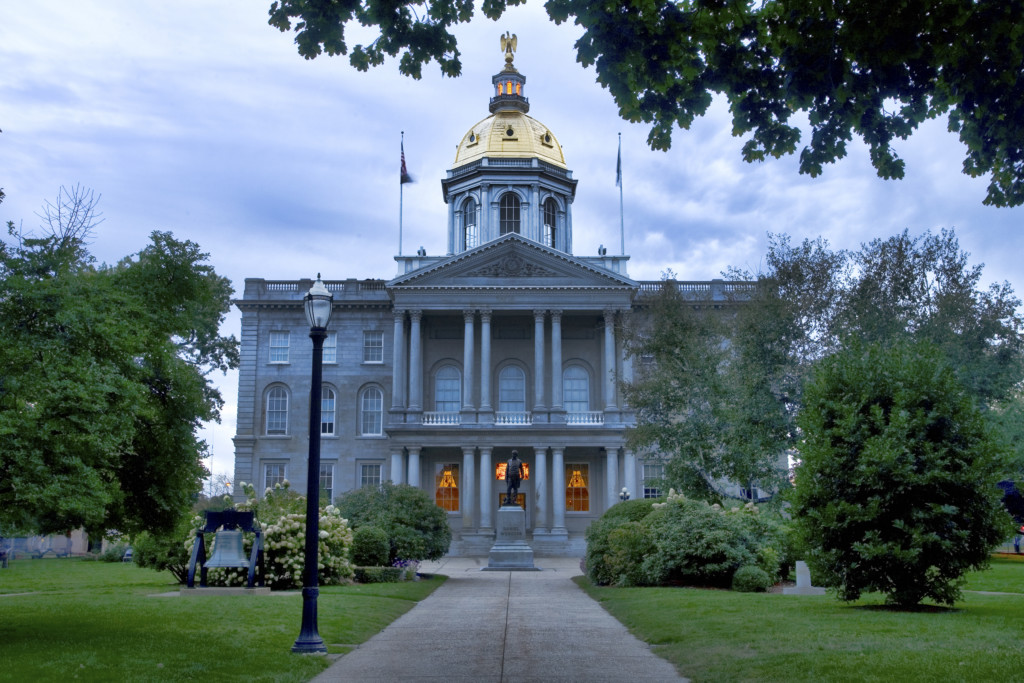 It’s not all about the business tax rate.

The veto of the budget, and the accompanying legislation, affect businesses in other ways by holding up funds for economic and technological development, relief for the workforce and housing shortages, and Medicaid increases that could alleviate shifting healthcare costs to companies that provide private insurance for their employees.

And it isn’t just about the money.

The budget sets up a Housing Appeal Board (a top priority of the real estate and construction industry) and regulations for Associated Health Plans (allowing businesses to buy lower-cost insurance in bulk) as well as revises the business tax structure to benefit multi-state companies based in the Granite State.

All of this is held up for a fight over a fifth of a percent in the Business Profit Tax rate, and less than a tenth of a percent of the Business Enterprise Tax that is expected to raise $90 million in a $13.3 billion budget. (The budget is $200 million more than the one the governor proposed, a 1.5% difference.)

But is this impasse worth it? It’s a question many business groups decline to answer.   The Business and Industry Association, for instance, strongly supports continuing the tax cuts, but “we did not ask the governor to veto the budget,” said David Juvet, vice president of policy at the BIA. “That is his decision.”

Does that make him to blame? Juvet certainly didn’t imply that. But Democrats certainly do. Democrats made many compromises, chief among them, pulling their top priority — a mandated paid family leave program — out of the budget.  And they argue they need that additional $90 million they’ve budgeted.

Republicans blame the Democrats for reversing a tax cut that already went into effect (7.9% to 7.7% for the BPT, 6.75% to 6% for the BET). It was a continuation of a cut that got New Hampshire under Massachusetts’s rate of 8%. 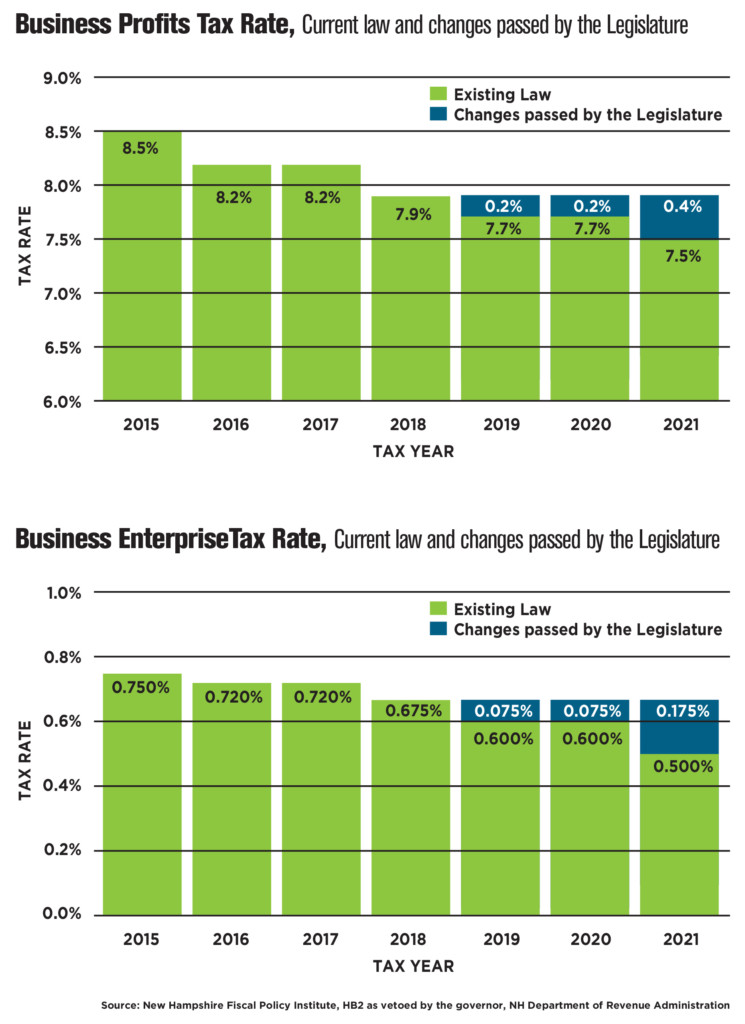 Republicans had voted to continue cutting to 7.5% by 2022. Democrats say they wanted to “freeze” it, arguing that since no businesses would have to pay the taxes until next year, they’ll just end up paying the same rates. Republicans argued that businesses planned for that tax decrease and have already started making quarterly estimated tax payments. Thus, bringing the tax rate back to 7.9% is not just a rollback but a tax hike.

The dilemma itself creates another difficulty for business: which rate should they use to calculate said quarterly payment? Would they be penalized if it goes back up?

Probably not. First of all, many businesses just use last year’s taxes to figure out this year’s payments, a “safe harbor” to prevent penalties, reports Jim Usseglio, a Manchester accountant. And even if they do switch to the lower rate for their 2019 estimates, the difference is so minuscule that it would not likely trigger a penalty.

Shaun Thomas, the tax policy analyst at the state Department of Revenue Administration agrees, but in the event that it did, “we have the ability to waive the penalty and it is likely that is the approach we are going to take.”

For some businesses, however, the budget could make a huge difference in their taxes. HB2 (the trailer bill to the budget) changes our tax code when it comes to apportioning taxable business activity in multi-state companies by switching to a single sale factor. That’s what most of our neighbors do, and because we haven’t switched yet, companies in the state pay more in business taxes, and out-of-state companies pay less.

That switch, and another for service companies called market-based sourcing, could mean thousands, even millions, in tax savings for local companies.

“For some companies this could mean so much more than the tax rate,” said Usseglio. Unlike the tax rate changes, however, these won’t be retroactive. Indeed, the biggest change — single sales — won’t take effect till 2022.

Also tucked into the trailer bill is legislation allowing businesses to join together to buy Association Health Plans. Federal regulations had limited AHPs to existing trade associations, and even then were so restrictive that they were nearly impossible to form. But the Trump administration eased those restrictions and allowed AHPs to spread to geographical groupings like chambers of commerce and even to independent contractors, like Uber drivers. Stakeholders spent months revising state law, forging compromise language to allow AHPs to flourish while making sure they didn’t hurt the existing market. However, a federal court challenge has put the federal regulations on hold, so state lawmakers added a contingency clause, which would only let the law go forward if the federal regulations survive the challenge.  That language is in the budget.

The Greater Nashua Chamber of Commerce was one of the many groups looking forward to forming an AHP, so even if the budget doesn’t pass, “there was agreement on the language and that part is good,” said Chamber President Tracy Hall.

AHPs may be important for the future. Increasing Medicaid reimbursement rates is a much more immediate concern, particularly because New Hampshire changed its Medicaid expansion plan. Previously that population — about 50,000 people ineligible for both Obamacare subsidies and traditional Medicaid — were placed on the exchange with the state picking up the tab. This meant that providers received the same rates as other privately insured patients. But the state moved that population to Medicaid, which in New Hampshire has among the lowest reimbursement rates in the country, “so now they are losing money on these patients,” said James G. Potter, executive vice president of the New Hampshire Medical Society.

The Hospital Association strongly supports the budget because of the reimbursement rate as well as other provisions particularly aimed at the mental health system.

“We could not guarantee that a facility won’t close,” said Brendan W. Williams, president of the NH Health Care Association, which represents private nursing homes depending on Medicaid funding. “You can’t budget on hypotheticals and a facility must provide 60 days notice. If any facility goes, it won’t be because of low occupancy.”

The rooms may be full, but positions aren’t. Because of the low rates, nursing homes aren’t able to pay enough to hang onto staff. Nearly 30% of the registered nurses trained in New Hampshire go elsewhere, Williams said.

“My members are worried sick,” he said. “We have one of the worse reimbursement rates, the lowest unemployment rate and the second oldest population. It’s a perfect storm.”

The budget also provides $3.7 million a year to the State Loan Repayment Program, which pays off the student loans of primary medical providers willing to work in the state.

“The budget veto forced this program to come to a grinding halt with only $160,000 available this quarter,” said Laurie Harding, chair of the Commission of the Primary Care Workforce. “We are unable to accept new applicants. We already know that we will lose applicants to other states because we cannot commit to them.”

The budget also funds another student loan repayment program for those working with companies participating in the Advanced Regenerative Manufacturing Institute, or ARMI, inventor Dean Kamen’s attempt to make Manchester a hub for the tissue engineering industry.

Last year, lawmakers passed a tax forgiveness program to promote the industry, as well as the language for the loan program, but it is only this year that the state funded it with a $5 million bond via the NH Business Finance Authority.

ARMI is planning to open its incubator — where startups and representatives of larger companies can rub shoulders — by the end of the year.

“The delay isn’t that important right now, but we would love to have it in place by the time we open it up as an incentive to attract people to come,” said Maureen Toohey, ARMI’s acting deputy executive director.

There are many other economic development provisions in the budget.

There is the “sunny day fund,” run by the Department of Business and Economic Affairs, which would fund research and development projects in key industries. NH EPSCoR, a group led by the University of New Hampshire that handles federal investments for scientific research in the state, argued that New Hampshire neglected R&D compared to other states, resulting in less venture capital and fewer startups. The $1 million fund would help assess the potential commercialization of university research, match funds for small businesses that have won federal research grants and help fund the NH Innovation Research Center, which manages state-funded grands used for research projects.

Another $1 million would go to the Community Development Finance Authority.  That’s a small amount for an agency that has dispersed about $71 million in the last three years for such things as Community Block Development Grants, nonprofit community projects funded through tax credits matching local business donations, and a clean energy revolving loan fund. But there is hardly any unrestricted money, said CDFA director Kevin Paterson.

“We put that $1 million to work and got several million more in investment horsepower,” Paterson said.

The Small Business Development Center is slated to receive some $315,000 in the main budget bill and $125,000 in the trailer bill for direct counseling services to small business that are starting up or wish to expand.

The trailer bill in conjunction with SB2 — which had been passed but hasn’t been signed yet — provides $6 million for job training programs (up from $2 million previously) including $500,000 for a Stay Work Play initiative. The funds would be used to help with soft skills for those traditionally out of the workforce, such as the long-term unemployed, the disabled and those struggling with opioid addiction, to alleviate workforce shortage. That money, however, would come from the unemployment compensation fund, which had some businesses nervous that it could push up premiums.

And then there is more funding for the state universities and the community college system. For the latter, the extra funding would prevent tuition increases but also enable it better to work with employers to build special training and apprentice programs.

Finally, the budget funds some key programs for the real estate and construction industry.

It would appropriate $5 million for the NH Housing Finance Authority’s affordable housing fund, which helps developers and nonprofits build multi-family apartments and starter homes, matching the biggest contribution ever: $5 million in 2002.  It would also divert $5 million a year from the real estate transfer tax, a measure that has the backing of the NH Association of Realtors.

“We think that’s appropriate,” said Bob Quinn, the association’s vice president of public affairs. “We have historic levels of low inventory and that clearly impacts the number of homes sold.”

“With more predictability, we would be able to engage the development community more,” added Dean Christon, executive director of the Finance Authority.

Then there are the regulatory barriers addressed by the Housing Appeals Board, also in the trailer bill.

“That was our most important priority,” said Ari Pollack, a lobbyist with the NH Home Builders Association. The board would give developers a chance to appeal zoning board decisions without having to go to court.

And there is a $3 million loan fund for landlords that need to remove lead paint — in response to new standards and the institution of mandatory testing passed by lawmakers last session. While this is far short of the $6 million grant program that was proposed in original legislation, it is preferable to what’s in the current law: a loan guarantee program that banks said they would not participate in.

But like education and healthcare, the impact of the housing measures extends beyond that particular industry. The lack of workforce housing contributes to the lack of an adequate workforce, too.

“There is a reason we don’t take a position on the budget,” said Juvet, despite the rollback of the tax cuts. “There are lot of things in there that the business community does support.”