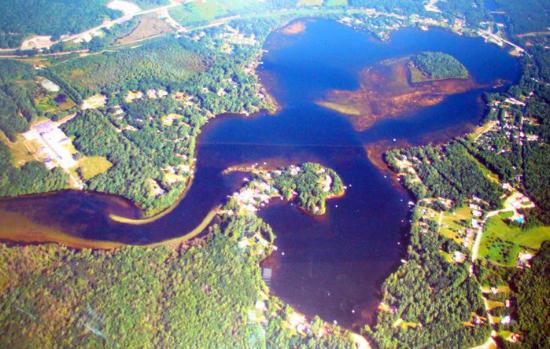 Silver Lake empties into the Winnipesaukee River, which flows through flat marshland to join the Tioga River.

State Rep. Mike Sylvia, a Belmont Republican who chairs the NH Liberty Alliance – who has been an advocate for New Hampshire to secede from the Union – does see one need for the federal government: to fund an effort to jump-start construction of a dam on the Winnipesaukee River.

As chair of the Belknap County convention, Sylvia has proposed spending $1 million of the $13 million allocated to the county by the American Rescue Plan Act to design and permit the project, which would include dredging the river and building a dam below Silver Lake.

Sylvia said his proposal was prompted by “a lot of constituents in Tilton and Belmont who have contended with the ups and downs of water levels in the lake over many years. It’s been an ongoing thing,” he said.

The entire watershed covers some 566 square miles, of which Silver Lake accounts for less than a third of a square mile. In fact, Lake Winnipesaukee is 220 times the size of Silver Lake. When soils are saturated, an inch of rain can raise the lake five inches or more.

Water levels throughout the watershed are managed by the New Hampshire Dam Bureau and are primarily determined by the volume of water released from Lake Winnipesaukee at the Lakeport Dam in Laconia. Flows and levels are tailored to balance diverse interests — hydroelectric generation, recreational activities, property owners, wildlife habitat, wastewater treatment and flood control — against the risk of extreme weather events.

In simplest terms and under normal conditions, from June to October, when evaporation may drop the lake a foot or more, discharges are set to maintain levels high enough to ease navigation without eroding shorelines. After Columbus Day the lake is lowered until it falls two feet below its optimal summer level by early March. Then with melting snow and spring rain, discharges are tailored to weather conditions to return the lake to  504.32 feet above sea level — “full pool” — by Memorial Day.

The Lochmere Dam at the head of Silver Lake provides the only control of downstream flows from Lakes Winnipesaukee and Winnisquam and there discharges are determined by operations at Lakeport. As a result the level of Silver Lake tends to fluctuate frequently and widely.

Silver Lake empties into the Winnipesaukee River, which flows through flat marshland to join the Tioga River. There, sediment limits the capacity of the channel to carry water from the lake. And when flows in this part of the watershed increase, they are further slowed by uncontrolled runoff from the Tioga River. All of which causes Silver Lake to rise and flood.

Since the U.S. Army Corps of Engineers first addressed the issue in 1957, there have been a half-dozen studies and reports along with several public hearings and countless public meetings. In 1998, the Legislature required the Dam Bureau to develop a model for managing the watershed and established a commission to oversee its work, but the statute was repealed in 2010.

Sylvia’s proposal draws on a 1985 report by the U.S. Army Corps of Engineers, which found that the Winnipesaukee River lacked sufficient capacity to draw down Silver Lake in time to provide storage for future rainfall and increased flows. Consequently, after storms, water levels throughout the watershed may remain high for weeks.

The report recommended dredging 6,000 feet of the river channel below the outlet from Silver Lake and constructing a dam where the river crosses under Route 140 east of Exit 20 on Interstate 93. The project was estimated to cost $5.79 million in 1985 dollars. Alternatively, the report found that, of 93 properties around the lake, the 47 most at risk of flooding could be protected at a cost of $1.2 million. Today, most of the shoreline, in Tilton to the west and Belmont to the east, is lined with homes.

Jim Gallagher, chief engineer of the Dam Bureau, estimated the cost of studying, designing and permitting the project at about  $1 million, while the cost of dredging the  channel and constructing the dam could run to another $5 or $6 million.

Sylvia’s proposal got a cool reception from the Belknap County commissioners, who did not include the project in their plan for spending the ARPA funds. Instead, the commission’s priorities  included increased compensation to retain, recruit and train qualified staff, particularly at the county nursing home, as well as investments in county facilities.

Sylvia said that his proposal enjoys support among the 18 members of the county delegation — all Republicans — who are considering overriding the commissioners.

Commissioner Hunter Taylor said that a capital investment to improve management of the Winnipesaukee River watershed is the responsibility of the state, not the county. ”Why would the county spend $1 million to fund soft costs to design and permit the project when it is not on the state’s agenda and without any assurance that it will be?” he asked.

Further, Taylor noted that, as he understands the statutes, while the delegation may appropriate funds, the authority to expend them rests with commission.

As for the future of the project, should his call for secession succeed, Sylvia declined to speculate, leaving that river to be crossed when we get to it.