As second wave looms, some NH restaurants stick to curbside 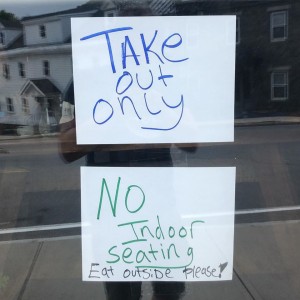 A new surge of Covid-19 infections in southern states has reversed Texas’ and Florida’s statewide reopening plans. New York City announced this week that it would postpone indoor dining indefinitely as infections in other states have been traced to bars and restaurants. New Jersey recently reversed its plan to reopen restaurants for indoor dining.

Although New Hampshire began to allow indoor dining June 15, some restaurants have decided against going that route for a variety of reasons, from cost savings to health concerns for customers and staff.

The coffee shop originally planned to open July 1, but plans recently changed when Lesmerises and her staff saw that a second wave of infections had already started in southern states. Crackskull’s will now remain curbside pickup only, with a few open seats outside the shop.

Down the street at Johnny Boston’s International, indoor dining was available for two weeks before John Kiper, the owner, decided to reverse that decision.

“This guy called and said, I haven’t been wearing a mask, do I have to wear a mask?” Kiper said. “And most of the people that were eating inside were not from town. A lot of people were visiting their kids from UNH so there were people visiting from Rhode Island and Massachusetts.”

Kiper also worries about the potential of spread within his 600-foot space via air conditioning. A CDC report in April found that an air conditioner at a restaurant in Guangzhou, China could have propagated respiratory droplets from table to table.

Even with only outdoor seating and takeout, Kiper said he’s been able to match June 2019 sales numbers. He thinks that’s a result of mastering online ordering and streamlining the menu. Around 50% of sales were also already takeout orders pre-Covid.

“In some ways I would say we are actually surprisingly better off, I’m in a better position than I was before.”

Mike Somers, CEO and president of the New Hampshire Lodging and Restaurant Association, says eateries around the state are doing their best to comply with state guidelines while remaining in business, but some are experiencing less interest in indoor dining than before the health crisis. Restaurants in Rockingham, Hillsborough, Merrimack and Strafford counties, where capacity is limited to 50 percent, may be experiencing greater difficulty. In northern and western New Hampshire, that rule doesn’t apply so long as tables are distanced six feet apart.

Somers says he hasn’t heard from restaurants across the state that have decided against indoor dining, but some have been experiencing difficulty getting their employees to return to work for a variety of reasons.

He said, that, until recently, there were childcare issues because employees :didn’t have anywhere they were leaving their dependents. And then, of course, workers that are actually legitimately concerned about going to work and potentially catching the virus.”

However, Somers’ biggest concern has been the loss in revenue among New Hampshire’s hospitality industry.

At Crackskull’s, “we are definitely not seeing normal June sales numbers,” Lesmerises said. “We’ve curbed our hours to minimize payroll costs, and that seems to help a bit.”

“We’re already losing money with rent and utilities, but with 50 percent capacity we can’t make the money to support the staff. We can’t,” said Liu Vane, owner of three restaurants in southern New Hampshire.

Vane has been unable to open Cheddar & Rye, a part-sandwich shop, part-whiskey bar in Manchester, the city with the most cumulative Covid-19 infections in New Hampshire. He said his staff doesn’t yet feel comfortable serving under the current health conditions, but are looking to open later this month.

All three of Vane’s restaurants have remained completely closed since March. He also owns Codex in Nashua and Chuck’s BARbershop in Concord, both speakeasy-style bars. Beside the fact that the bars don’t have patio seating at all, Vane said the addition of outside seats would defeat the purpose and atmosphere of a speakeasy.

Vane’s projected reopening date is currently Aug. 7. But that will depend on Gov. Chris Sununu’s decision whether or not to approve the Governor’s Economic Re-Opening Task Force’s recent recommendation to allow 100% occupancy at restaurants.

“We appreciate that this is a health crisis, but these are unsustainable numbers for the long term,” said Somers, who also sits on the task force.