As eateries continue to struggle, Rally for NH Restaurants seeks to help 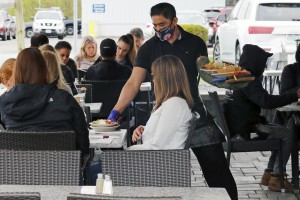 Since strict foodservice restrictions were put in place last March 17, at least 200 New Hampshire restaurants have closed, according to the NH Lodging and Restaurant Association. And, as Covid-19 drags into winter with temperatures not conducive to outdoor dining, many restaurants, continue to struggle. So, in an effort to help them, the association has launched the Rally for NH Restaurants Campaign for February and March.

The campaign, which has a website, and is on Facebook, Twitterand Instagram, provides ways for residents and visitors to support local restaurants while also staying safe during the pandemic.

“I will say right now, most if not all restaurants are being negatively affected,” said Mike Somers, CEO and president of the NHLRA.

According to Somers, the association initially tried keeping track of the total number of restaurants that had been forced to shut down, but it became too complicated to figure out.

“The number keeps changing faster than we can keep up with it,” he said.

Somers explained that it is hard to distinguish between which places are closed permanently and which are closed temporarily. Some restaurants have chosen to “hibernate” and close down for a few months until the demand for dining services increase in the spring.

Dining in “is the number one most helpful way to support restaurants and their staff,” according to the campaign website, since it employs waitstaff and provides them with revenue from tips, which are not as common through takeout.

The campaign emphasizes only eating out with people in the same household or pod.

The website also describes other things restaurants are doing to make sure customers opting to dine stay healthy, such as contactless or disposable menus and daily health screenings for all employees.

The campaign also recommends tipping even for those not dining in.

“Tipped staff across the state have been impacted by reduced hours and fewer guests and seasonal tourists, in many cases devastating their incomes.”

Before the pandemic, the restaurant and foodservice industry accounted for around 10% of the state’s workforce and had more than 65,000 individual workers, according to the National Restaurant Association. Thousands of these workers have been let go or had their hours reduced.

Somers said Covid-19 has “really impacted all the regions of the state. I don’t think there are too many restaurants that can say that the pandemic hasn’t affected very negatively and intensely.”