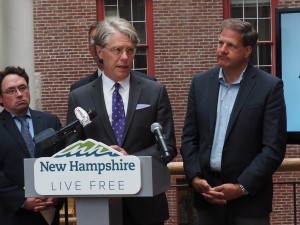 Taylor Caswell, commissioner of the New Hampshire Department of Business and Economic Affairs, speaks about the housing plan during a press conference on Tuesday. (Ethan DeWitt-New Hampshire Bulletin)

New Hampshire rental housing developers will have two months starting next week to apply for their share of a $100 million housing development program, Gov. Chris Sununu and state officials said Tuesday. The announcement came as the state released new details about the program.

“I have no doubt all this money is going to be allocated,” Sununu said.

The initiative is intended to use federal relief funds from the 2021 American Rescue Plan Act to incentivize towns and developers to build affordable rental housing in the state. While the Executive Council approved the program in May, Tuesday was the first day the Department of Business and Economic Affairs released application deadlines.

Developers will be able to apply for the $50 million in funding between July 11 – next Monday – and Sept. 2. The developers must show that the project will serve tenants making up to 80 percent of that person’s area median income, that they have secured matching funding, and that their project needs the funding because of a shortfall. Developers are eligible for up to $3 million per project.

The cost for a two-bedroom unit that is affordable for tenants making up to 80 percent of the area median income varies across the state. According to an analysis from the BEA using Housing and Urban Development income limits, in Manchester, it is $1,798; in Portsmouth, $2,012; and in Belknap County, $1,427.

Meanwhile, towns and cities can apply to receive funds to incentivize the quick approval of new housing units.

The program will allocate $10,000 per new unit that municipalities approve, as long as they approve permits within six months of their application. Applications for those funds will be accepted beginning July 29. The program will allocate $30 million toward the permitting incentives, $5 million to allow towns to hire consultants to overhaul zoning and planning ordinances, and $5 million toward demolition grants to allow municipalities to clear dilapidated buildings.

The state is scheduling just one round of applications for developers, according to BEA Commissioner Taylor Caswell, a departure from a previous proposal for the program that envisioned multiple rounds. That means developers will be competing in one pool, and applicants must have projects close to completion this summer. Once the department makes its selections after Sept. 2, they will appear before the Executive Council for final approval.

The state has not established strict guidelines for how the development projects will be chosen and how they will be distributed economically and geographically, Caswell and Sununu said. The governor said the choices would include a mix of regional needs, but added that the final selection would be determined by who applies.

Previously, state officials had pledged to dedicate the first round of funding to nonprofit groups with affordable housing projects. The new, one-round process eliminates that possibility, but Caswell said the BEA would be dedicating $10 million of the $50 million to smaller developments from nonprofit organizations.

The state has released a new portal with more information for applicants: invest603.com.

Caswell said he didn’t have a blanket answer, but he called on developers to work with the NH Housing Finance Authority, which administers those federal tax credits, to find a way to balance those funds.

With housing materials hard to source and pricey with inflation, Sununu and Caswell said they anticipated the new program will be exhausted by the end of the year.

“There’s $50 million worth of need for sure out there,” Caswell said. “And we want to get this addressed fast and efficiently.”