Third quarter sales up 20% from a year earlier 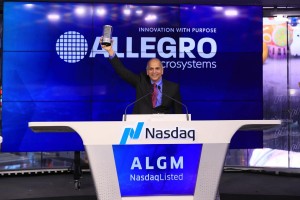 Allegro Microsystems CEO Ravi Vig, shown here at the celebration of the firm’s initial offering on the Nasdaq in October, sees ‘further confidence in the longevity’ of the Manchester-based company’s current revenue picture.

The Manchester-based maker of integrated sensors and power circuits, reported third-quarter revenue of $164.4 million for the three-month period ending Dec. 25, up 20% from the prior quarter.

The firm attributed half of that growth to the economic rebound of the automotive industry.

Automotive revenue accounted for 69% of the company’s quarterly revenue, ending at $113.9 million for the quarter, up 27% from the prior quarter and 15% year over year.

Industrial revenue was also strong, at 14% of the company’s total revenue. That clocked in at $23.7 million for the company’s third quarter of its 2021 fiscal year, up 9% sequentially and 11% year over year.

Renewable energy and internet-of-things applications increased sales by 10% and 5% from the prior quarter.

“Demand surged across our end markets, but particularly in automotive,” said Paul Walsh, Allegro’s chief financial officer, in a Feb. 2 earnings call. “We saw bookings accelerate as the quarter progressed and backlogs strengthened, with extended order visibility into the first half of fiscal ’22 (April to September 2021).”

At the end of last year, approximately 23 million cars were produced, according to industry estimates shared by Walsh.

He expected demand to continue, though perhaps only at single-digit growth in the next quarter, as the initial ramp-up – after the effect of Covid-19 shutdowns and economic headwinds – cools down over time. Walsh noted semiconductors are now critical in the operation of new vehicles and automakers started 2020 with record low inventories in need of replenishing.

Last quarter, Allegro secured additional business regarding a design for an electric power steering advanced driver-assistance system for customers in Korea, which will require both its magnetic sensors and power integrated circuits, and a new xEV (electrified) inverter and steering system at multiple Japanese Tier 1 customers.

“These program wins are expected to start contributing to revenue as soon as the fourth quarter,” said Ravi Vig, president and CEO. “We believe we are gaining share in these applications, giving us further confidence in the longevity of this revenue.”

At the close of trading on Wednesday, the share price was $29.02.