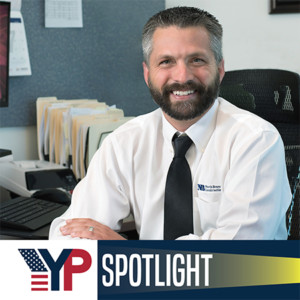 Editor’s note: This is the first in a series of monthly articles highlighting a member of the Associated Builders and Contractors NH/VT’s Young Professionals Group.

On average, it takes 22 different subcontractors to build a home – a fact either unknown or undaunting to a young Nick Trudel, who set out years ago with a $5,000 loan, bought some tools, and went to work building his first house not a week later.

Though born into the construction industry, the trades were far from a first career choice for Trudel. Like most of his friends, he originally attended college where he dabbled in music, tech and design, among other pursuits, before returning to work for his family’s construction and development firm, where he built the skills he would need to start his own business. To this day, the largest house he ever constructed was that first house he built as an independent contractor and a new business owner.

Even outside of his career path, he has always been vertically minded. As an avid climber, he has scaled cliffs in Red Rocks, Yosemite and the White Mountains, among others. Trudel’s passion for climbing revolves around consistently working to better himself and trying to beat his personal bests, an effort not unlike the dedication and perseverance he’s applied to his career.

Today, Trudel is a project manager/estimator at North Branch Construction in Concord, where he’s worked since 2011. When he talks about the construction industry, he talks about camaraderie, independence, problem-solving and a sense of accomplishment.

At Christmas, his family congregates in a house he built: the literal framework of his family’s daily life.

Though Trudel takes great pride in his work, it is surpassed by his pride in his 2-year-old daughter, who loves to sing and read, and who will surely join her dad on climbing adventures once she’s old enough.

When asked what advice he has for young workers looking to enter the construction industry, Trudel said he recommends exploring all the different possibilities the trades have to offer. Between mechanical, electrical, carpentry, management, and a multitude of other paths, the construction industry has a lot of potential areas of interest, he said, and exposure to a variety of different skills and trades can serve a construction professional well, even as a specialist.

Trudel is passionate about teaching his trade to young workers, and recalls that some of his happiest moments at work were on the job. Overall, he said, disregard the old stigmas of construction and don’t be afraid to get dirty. Some of his most memorable moments were in the dust and mud.

Founded in 2012 as an initiative of the Associated Builders and Contractors NH/VT, the ABC Young Professionals Group’s mission is to develop, empower and connect young professionals through events in an effort to enhance their professional development and business success within the construction industry. ABC YPG seeks to contribute to efforts to attract, develop and retain a skilled workforce by providing opportunities for professional development to young workers.