If you own a small business with fewer than 50 employees, your business doesn’t have to worry about the Affordable Care Act. But if you are self-employed, or don’t offer insurance and you yourself depend on the individual market for coverage, read on.

There are three big changes next year under the Affordable Care Act that could affect you:

• Some 40,000 people who obtained coverage last year through Medicaid expansion will now be moved to the exchange, almost doubling the number of individuals there now (about 45,000). Nobody is sure how this will affect the individual market, but most believe it will push up premiums to some extent.

• The fines for individuals who don’t buy coverage on the exchange will double, providing a greater incentive for those without coverage to get some.

• Centene, which currently provides Medicaid managed care services, will compete on the individual exchange market. But unlike Assurant, which it will replace and had almost no members, Centene, a Fortune 500 company, is expected to be a major player in New Hampshire, covering nearly 20,000 people.

Before we get into the details, let’s pull back and take a look at the big picture. There is no question that the ACA has reduced the number of people in New Hampshire without health insurance. In two years, from 2013 to 2015, the percentage of uninsured has dropped from 17.3 to 11.7 percent nationwide and from 13.8 to 8.7 percent in the Granite State.

This has not been because businesses are covering more employees; in fact, they have been covering slightly fewer. It is individual coverage through the private exchange, combined with Medicaid expansion, that has grown, covering more than 85,000 people.

Add to that the 40,000 who are receiving health care coverage through Medicaid expansion, and you have a 25 percent drop in uninsured patient visits, according to a report released Oct. 8 by the NH Hospital Association.

As a result, uncompensated care has dropped from $427 million to roughly $280 million, according to a September hospital survey.

Those uncompensated care costs are often passed along to those that do pay, which – for the most part – means group policies subsidized by employers.

All this, say ACA supporters, and even some detractors, has helped level off premium increases into the low single digits in the group market, a trend that is expected to continue in 2016.

The exchange has taken the burden off businesses in another way: A slow but steady trickle of employers have been getting out of the health care business altogether. That trickle might increase next year, as the paperwork increases for those with over 50 employees that do offer coverage. (See “Smaller firms, meet the ACA”)

But the increased coverage requirements for those firms between 50 and 100 employees – such as conforming their policies to the metal level requirements (gold, silver, bronze), the list billing, and limits on risk factors tied to to age, location and company size – won’t go into effect, thanks to a last-minute bill co-sponsored by U.S. Sen. Jeanne Shaheen and signed into law by President Obama on Oct. 8.

But the mandate that companies provide coverage, or pay a penalty, will still be applied to firms between 50 to 100 employees on Jan. 1.

The exchange is also where the self-employed get their health care. Before the ACA, New Hampshire was one of the few states where they could share in the benefits and protections of group coverage. In 2014, those “groups of one” had to turn to the exchange if they want coverage, and in 2016, they will have an extra incentive to do so.

First, penalties have gone up, and they are going up sharply next year.

Another incentive is that there is also a lot more competition out there in the market and most offer a greater choice of providers.

When the ACA first became law, only one firm entered the New Hampshire individual market – Anthem – with a very limited network, engendering much controversy. Last year and this year there are five. But it’s a different five this go-round, with Assurant exiting the market nationally, and Centene’s subsidiary, NH Healthy Families, offering a new product called Ambetter.

Ambetter will be a major presence on the exchange, not just because Centene is a publicly traded company with $21 billion in annual revenue and 4 million managed care members, but also because NH Healthy Families has been one of the two companies providing managed care to the state’s Medicaid population since the state privatized that service at the end of 2013, under a $2.2 billion, three-year contract.

In August 2014, that contract included the uninsured newly covered under Medicaid expansion – those too poor to be helped by the ACA but making too much money to be covered by traditional Medicaid. That new population grew to over 40,000, of which NH Healthy Families covers about 18,000.

It is this population that is expected to follow NH Healthy Families to Ambetter on the exchange.

While NH Healthy Families enrollees could choose another plan, if they do nothing, Ambetter will be the default insurer. 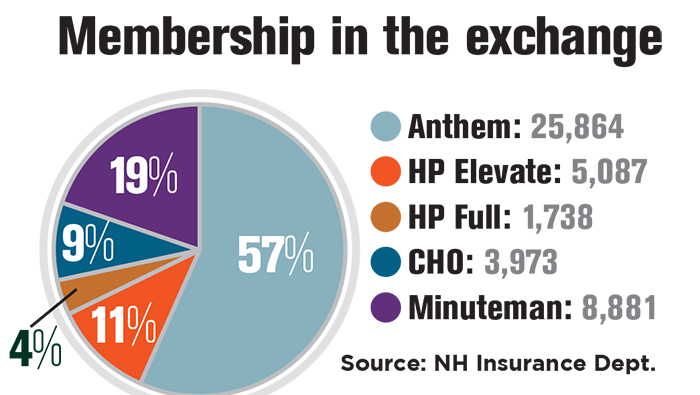 Carol Sideris, director of the Division of Client Services at the NH Department of Health and Human Services, expects this rather massive shift to occur rather smoothly, with the insured primarily obtaining coverage online, though DHHS will offer caseworker assistance to those who need it.

“They’ve all had some experience picking plans. They are used to provider networks,” she said.

Unlike other individuals on the exchange, price won’t be a factor for these new entrants. The federal government will pick up the full tab in 2016, though the state would chip in 5 percent in 2017, gradually increasing to 10 percent by 2020 if the program continues beyond 2016. (The Legislature hasn’t made up its mind yet on continuing with the Medicaid expansion program.)

“This is a new population. They do have pent-up health demands,” said Candace Reddy, vice president of external affairs and business development for NH Healthy Families.

While this is not so new to NH Healthy Families, it will be to the other four carriers, and some are concerned.

But Minuteman – a surprise success story on the exchange this year – said that the filing just represented the “worst-case scenario,” and having analyzed the data, will be offering plans in the 4 to 9 percent rate increase.

“We built out the network that provided high quality, and our pricing points were very attractive to shoppers on the exchange,” said Minuteman spokesperson Jim Borghesani, who added that even with the increased rates, his company’s would still be below Anthem’s in 2016.

Minuteman also will also include a few more benefits next year, such as out-of-network urgent care coverage at no extra charge, and slight expansion of the network itself. But, according to NH the Insurance Department, Minuteman had the most narrow network as of September, with only 11 of the state’s 26 hospitals participating.

Anthem Blue Cross and Blue Shield of NH had the exchange to itself in 2014 and has the biggest market share in 2015, even though it offers one of the smaller networks. For next year, Anthem has signed up all but five hospital networks in the state and managed to keep its rates flat.

“Basically, there will no be increase at all,” said Anthem NH president Lisa M. Guertin. “There is a caveat though – that’s an average.”

Anthem’s major new benefit will be a telemedicine service, LiveHealth Online. That will cover consultations, including prescriptions, from doctors all over the country, in accordance with a new state law. This will not only lower costs, but increase convenience, especially for those in remote areas, by “enabling people to see a doctor whenever they need to, wherever they happen to be,” Guertin said.

Harvard Pilgrim Health Care offered two networks on the exchange last year, the lower-cost ElevateHealth, with a network of 16 hospitals and more than 5,000 members, as well as a full network product with more than 1,700 members.

Beth Roberts, Harvard Pilgrim’s senior vice president of regional markets, said she’s very pleased with the popularity of ElevateHealth, a collaboration with several hospitals (the largest being Dartmouth Hitchcock) that has “helped focus the patient and has a stronger [lower] price point. It definitely brought down prices. That was the goal.”

In 2016, Harvard Pilgrim will roll out Benevera Health, another collaborative venture, this time with Dartmouth-Hitchcock, Elliot Health Services and Frisbie Memorial Hospital. It will be an added service for those off and on the exchange.

Benevera, is not an insurance company, but a “population health” company, explained Rick Weisblatt, Harvard Pilgrim’s chief of innovation and strategy.

It has been started up with $10 million from Harvard Pilgrim and the three providers (Harvard Pilgrim will would have a 30 percent stake in the entity). Those funds will be used to hire people to provide coaching, follow-through and other coordination issues out of the providers’ offices.

“It’s to reduce the gaps in care, so they will get more out of the health care system,” said Weisblatt, who predicted that it would result in a 4 percent cut in costs. It will be particularly aimed at those with chronic health conditions that often afflict lower-income people.

“We would be doing this regardless of Medicaid expansion, but this will be very helpful,” he said.

Community Health Options, which has the smallest market share on the exchange in 2015, with nearly 4,000 members, might feel the largest relative impact of Medicaid expansion. That’s the reason behind the proposed double-digit rate increases, said CEO Kevin Lewis.

“That’s a reflection of Medicaid expansion, resulting in greater utilization that does put a pressure on upward pricing,” said Lewis. “We had to price appropriately.”