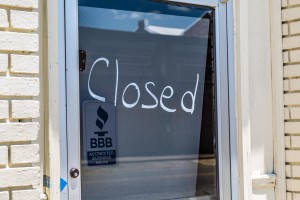 Hundreds of businesses have shuttered across the state due to the coronavirus pandemic, reveals a new report from the review site Yelp.

A spokesperson for Yelp told NH Public Radio that 449 businesses closed (both temporarily and permanently) between March and July. Last month, 280 businesses were marked as permanently closed in the state.

Researchers counted closures through business owners marking the business as closed, including by changing their hours or through a Covid-19 banner on their Yelp pages. Holiday-related closures were not counted in the report.

For many local businesses, these findings do not come as a surprise.

Before the pandemic hit, Jessica Moores, owner of the Manchester Craft Market, said her shop served as a venue for hundreds of vendors. Now, many of these crafters are jobless.

“I provide an income for over 200 crafters,” Moores said. “So if we’re closed all of those 200 people have nowhere to get an income from.”

Despite the restrictions, Moores has found new ways to bring in money for her vendors. Artists can sell and advertise their products through the business’s Facebook page.

Chef Brendan Vesey, owner of the Botanica in Portsmouth, and now-shuttered restaurant the Joinery, told NHPR he’s worried about his business surviving the fall.

“While things seem to be OK because it is summer, there constantly seems to be this low-level worry that spikes at times,” Vesey said. “I would be amazed if we served or did New Year’s Eve in the restaurant or Valentine’s Day.”

The data on closed businesses comes as New Hampshire’s unemployment rate continues to deflate after ballooning to 17.1% in April during the worst of the economic shutdown.

New figures released Tuesday by New Hampshire Employment Security show the state added nearly 19,000 jobs in July. That pushed the unemployment rate down to 8.1 percent. The biggest gains were in the retail sector, along with leisure and hospitality jobs.

With an increasing demand in outdoor dining, Vesey says he’s seeking to add staffers. However, he’s been struggling to fill these positions because of applicants’ fears of contracting the virus.

This is a stark difference from just a couple of months ago.

Before the pandemic, Vesey says the Botanica just celebrated its first birthday, and he was looking ahead to a busy indoor spring season. But, even as the restaurant remains afloat through federal and state relief funding, the chef says it all feels temporary.

“It is going to be taken away again,” said Vesey, warning a second wave of the virus. “It was yanked away with a snap of a finger.”