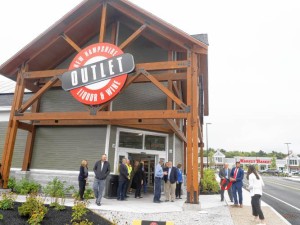 The grand opening of the New Hampshire Liquor Store off Exit 17 of Interstate 93 was held Tuesday. The first phase of the new commercial plaza in Penacook, known as Merchants Way, features a Market Basket supermarket and soon a HomeGoods store. (Geoff Forester—Concord Monitor)

The Market Basket shopping plaza off Exit 17 in Concord is entering a second phase of work that will feature more restaurant and retail space, a credit union and an urgent care facility.

Phase 1 included the construction of the Market Basket supermarket and a New Hampshire State Liquor Store – both of which have opened to customers. Several other buildings in Phase 1 are still under construction, including a Wendy’s, which will be open by the end of the month, and HomeGoods, which is scheduled to open by the end of October.

The Concord Planning Board will review design plans Wednesday night for Phase 2 of the Merchants Way project.

“The line between Phase 1 and phase 2 got a little blurry but everything in the center of the development, like the tenant building, Jersey Mike’s, the credit union, the urgent care, the retail building and the restaurant space is considered Phase 2,” said developer Laurie Rauseo. “We’ve had a very positive reaction to the phase 1 work.”

Rauseo expects to submit a formal site plan by the end of the year for review. If approved, construction is slated to begin in spring 2023 with completion over the next several years.

The plaza will serve residents in Penacook and the surrounding towns of Boscawen, Canterbury, Webster and Salisbury, among others. Construction on the shopping center, including the extension of city water and sewer lines, has been going on for more than a year.

Work is continuing on the stand-alone Wendy’s eatery and construction will begin shortly on a building that will hold a Service Credit Union and a Jersey Mike’s restaurant.

“An extensive sidewalk network is planned to include sidewalks on Merchants Way and Interchange Drive along with another pedestrian path from Whitney Road into the central part of the site,” a project narrative states. “An open green space is proposed on the north side of the restaurant where outdoor dining is also proposed.”

A 12-connection Tesla Supercharger station has been open for several months and the Mobil gas station is currently closed for unrelated renovations.

This article is are being shared by partners in the Granite State News Collaborative. For more information visit collaborativenh.org.