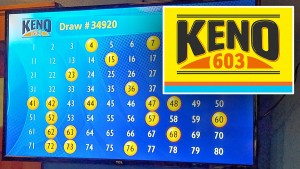 New Hampshire convenience stores can now offer keno, thanks to one of the 39 bills Gov. Chris Sununu signed into law last week. Other bills are aimed at boosting the cryptocurrency industry and providing oral health care to Medicaid recipients.

Before Friday, if you wanted to play keno you had to go to a bar or restaurant in the 91 municipalities that have voted to allow it. But House Bill 355 expands the game to grocery stores in those towns, though the most likely carrier will be convenience stores. This is a source of income for stores, since they receive an 8 percent cut of sales.

“That is a win,” said Kevin Daigle, CEO of the NH Grocers Association. “They’ve been cashing keno tickets at our stores for years.”

It wasn’t an easy victory. The bill was introduced in January 2021, but got hung up on the issue of screens and was retained in the House Ways and Means Committee into this year. The House version eventually passed a version that forbids screens, however. Daigle said it didn’t matter that much, since grocers would rather not have gamblers loiter around watching the screens.

HB 1503, also signed into law last week, would extend the state’s Uniform Commercial Code to “controllable electronic records,” more commonly known as cryptocurrency, to exempt it from various security laws starting next year, and to provide a framework to jump-start the industry here. The Senate tried to add language to that bill to require state contractors to use domestic steel in projects costing over $1 million. The House balked at that, but a compromise called for the state to give the bidding edge to contractors using domestic steel should the bids be equal in value.

But Gary Abbott, who heads of Associated General Contractors of NH still has some questions about it.

“It will be interesting how the various state agencies

interpret this new language,” wrote Abbott in a legislative sum up to ACG membership. “Who will decide ‘all qualifying factors being equal?’”

Both parts of the law won’t go into effect until January.

Finally, Sununu signed HB 103 and Senate Bill 422, which would include dental coverage in Medicaid benefits for the first time for those over 21, though there will be co-pays and deductibles. Currently, most Medicaid only covers dental emergencies, not routine care.

Sununu vetoed similar legislation last year because of budgetary concerns, and another bill died last year. This year, however, some $21 million of the cost will come from a settlement with Centene, which the state hired to mandate Medicaid pharmacy benefits. The program is expected to cost $30 million to start up and as much as $7.5 million a year, starting in fiscal 2024.