Out-of-staters flocked to the state in pandemic, but it’s not clear how many will stay 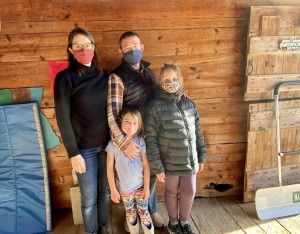 Emily Hyde and Eric Shelov moved with their daughters Joanna and Lydia Shelov in a vacation home near Squam Lake from Philadelphia since the pandemic began. (Photo by Sarah Gibson-NH Public Radio)

A year ago, people flocked to vacation towns in states like New Hampshire to flee Covid-19. For some, it was just a brief escape. But others settled into a rural lifestyle.

The question now is how long these newcomers are going to stay.

For 5-year-old Joanna Shelov, that has meant a year of outdoor fun.

“I get to ski a lot!” she says, standing on a melting snow bank in front of her family’s vacation home by Squam Lake.

“I do different kinds of skiing … cross country-skiing, skate skiing a tiny bit on my skis, and downhill skiing.”

Normally, Joanna and her family live in Philadelphia. But this year, they’re hunkering down in their extended family’s second home, a 230-year-old farmhouse by Squam Lake.

Their main reason for being here: Joanna and her sister are going to the tiny public school down the road. It’s been in-person five days a week since September, as opposed to schools in Philadelphia, which have been largely virtual.

Joanna’s dad Eric Shelov, a doctor, saw a lot of his job become virtual too. But there are challenges. The internet was painfully slow and took nine months to troubleshoot.

“We had Plan A, B and C, and I think we eventually got to Plan H and actually got better internet access,” he laughs.

And the Shelovs aren’t alone in this arrangement. Several schools in the Lakes Region have seen enrollments increase with new families during the pandemic

Kenneth Johnson, a demographer at the University of New Hampshire, says this influx could cause animosity, but it could also give some towns the boost they need.

“The volunteer fire department, the PTA, all the groups affiliated with churches or civic organizations – they all need that energy and enthusiasm of new people,” he says.

But Johnson says it’s too early to tell if the new people will stick around.

Take 25-year old Trysten McClain. He grew up in Grafton County. But he was in New Jersey working as a bartender when the pandemic hit.

“This is not going to work,” he remembers thinking after he lost his job. “I’d rather go hide in the woods, meditate, hike, listen to the rivers, and have more space.”

McClain packed up, drove to Plymouth, and eventually found work at a grocery store here. But it hasn’t been easy. He says being biracial and Black in this largely white town means he hears racist comments every day.

His big solace has been connecting with young Black Lives Matter activists in the state. And going outdoors.

“Whether it’s a quiet hike or going with a small little group acting like young 20-year-olds and blasting music and screaming at the top of the mountain,” he says.

McClain is renting an apartment with a childhood friend. But a lot of pandemic arrivals are buying homes. And the real estate market is hot. House prices have jumped 12% in the last year, and many get cash offers within a few hours of going on sale.

Massachusetts resident Crystal Gagnon is thinking of upgrading from a small cabin on a campground in Meredith where she, her wife and three kids are living.

“Our friends – some of them think we’re nuts,” she laughs. “But I do believe that maybe was the impression at the beginning but now that we’re here and they see – obviously I have Facebook and our kids talk to their friends still – I think they’re actually kind of envious.”

There’s some speculation that if pandemic migrants relocate to rural areas, those places will become more liberal.

But Gagnon says she likes New Hampshire because even during the public health crisis, some state restrictions and attitudes about Covid-19 have been more relaxed than in New Hampshire.

Gagnon says she’s planning to buy a permanent home here but is waiting until the pandemic housing frenzy cools down.