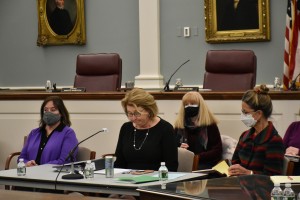 Gov. Chris Sununu signed an Executive Order on April 11 that reestablishes the state’s multidisciplinary Governor’s Commission on Domestic Violence, Sexual Assault, and Stalking after a ten-year absence. The decision to reconvene the Commission followed a domestic violence task force report released in March.

The task force and its recommendations came in the wake of an internal review committee created by the judicial branch to investigate the high-profile case of L.S.

The internal review committee formed immediately after the incident, issued a report eight days later finding the judge’s denial of L.S.’s request for a final order of protection “a reasonable application of current New Hampshire law to the facts of the case.” The report reflected that the judge’s conclusion that the plaintiff failed to prove the defendant’s conduct constituted a “credible present threat” under New Hampshire’s domestic violence statute was consistent with prior cases interpreting the law.

Justice Hantz Marconi said the biggest takeaway from her work on the task force was the need for the Governor’s Commission on Domestic and Sexual Violence — active from 1993 until 2013 — to reconvene. And, in fact, on April 11, the Commission was reformed.

NHLA attorney Mary Krueger, a victims’ rights advocate in the mid-‘90s and member of the recent task force, recalled attending commission meetings early in her career and believes restarting them will help to bring accountability and foster strong relationships.

“There’s a level of accountability that goes along with having strong relationships with people,” she said. “When you know people, you’re more likely to assume best intentions and, in the culture war climate we’re in today, we sometimes forget to do that. The more we can sit down and communicate with one another the more we can overcome that.”

Like Krueger, Justice Hantz Marconi believes the commission will be a place for various stakeholders to build trust, share their knowledge and work out differences.

The Governor’s Commission on Domestic and Sexual Violence was created in 1993 by the late Gov. Stephen Merrill following a high-profile case, and was made up of several committees, each focusing on various goals. The group was active until 2013 when its then-chair stepped down and no new chair was chosen.

Some of the committees formed under the commission, such as the Batterer’s Accountability Committee, remain active. The influence of other groups, such as the Judicial Branch’s Protocol Committee, continue.

The Judicial Branch’s Protocol Committee, created under the leadership of then-Administrative Judge Edwin W. Kelly in 1992, produced domestic violence protocols for guiding the court’s practice in domestic violence cases. The protocols were first adopted in 1994 and were subsequently approved by the New Hampshire Supreme Court. In 2007, compliance with the protocols was made mandatory, and they were revised, most recently, in 2013. In September 2021, the Circuit Court began its review of the protocols with the goal of aligning them with current statutes and best practices.

Kelly created the Protocol Committee, he said, to answer a variety of questions the domestic violence statute doesn’t answer.

“How quickly do we have to make decisions? Do we meet with people? Do we sit and talk with them? Because that’s not something judges are used to doing. And is there something wrong with that,” he said, explaining the types of questions that arose in early meetings. “Another question was, ‘What do we do with orders once we get them?’ The clerks needed to know, and the statute didn’t address that.”

New Hampshire’s domestic violence statute went into effect in the late 1970s, shortly before Kelly arrived in the state.

At that time, he said, the courts knew little about the complexities surrounding these cases.

“I could read the statute and make decisions based on the statute but there was zero case law because there were so few cases,” he said.

Kelly, who remained on the frontlines of domestic violence issues during his 36-year career, said the L.S. case has reignited a renewed commitment for all stakeholders in domestic violence cases to work together.

He recalled a case in the early ‘90s that also brought more focused attention on the issue of domestic violence — which he said the courts were still learning about — and the creation of the commission.

That case, in 1992, involved a man who discovered his estranged wife in bed with another man in Wolfeboro, and then beat the woman so badly she required 17 stiches in her face. Judge William O’Neil, who oversaw the case, accepted a plea bargain from the Carroll County attorney with a 29-day jail sentence, saying the attack wasn’t “completely unprovoked.”

The sentence, along with the judge’s remarks, created an uproar among victim’s advocates and it was shortly after this that Governor Merrill created the commission.

Grace Mattern, executive director of the New Hampshire Coalition Against Domestic and Sexual Violence for 30 years and a member of the original commission, referred to Kelly as an ally who was “incredible to work with.”

“Judge Kelly really understands the dynamics of domestic violence. And he was good at sending a message to judges about following the protocols,” Mattern said. “When judges weren’t following them, we could have a conversation with him, he would reach out to judges, and things would get better.”

‘The Most Difficult Cases’

Kelly said domestic violence and child abuse cases are among the most difficult cases for judges due to the gravity of what is potentially at stake.

“The reality is this: More than any case a court deals with, DV cases and child abuse cases are in a category all of their own,” he said. “Other cases are certainly important, but those two cases carry with them the fear of mortality, of someone dying as a result of something you did or didn’t do right from day one.”

He mentioned a case involving a victim who was murdered over 30 years ago that still haunts him.

“It happened in the mid- to late 1980s, and it will never go away,” Kelly said. “It’s always on my mind and I think what new judges don’t understand is how serious the issue is before they come and start hearing these cases.”

As a court administrator, Kelly said he was always aware of the complexities surrounding domestic violence cases and of the need to consult with experts.

“We have that jurisdiction, but we are not anywhere near the experts on the background of these things,” he said. “And this is especially true in terms of fully understanding intimate partner violence.”

Kelly used the example of field sobriety tests to illustrate how changing technology and knowledge plays a role in how judges decide cases and said this is true for domestic violence as well.

“No one felt like they were experts on things like horizontal gaze nystagmus tests, for instance, or field sobriety tests,” he said. “But when that first came out judges had to decide whether they were valid and whether they could make a finding of guilty or not guilty based on that test. And regarding DV, my view, always, was to reach out to the people who knew this stuff at their heart. Who spent their lives and careers working with the issues and to bring them in collaboratively.”

Kelly said the relationships established through the commission and its subcommittees began to grow quickly after they were established. He attributes that growth to a sense of trust among stakeholders, a shared commitment to the work, and a sense of concern for each other.

“There were cases over the years when someone would die in a DV-related offense, and the first call I’d get in the morning was Grace Mattern asking, ‘How’s the judge doing?’” he said. “And I would do the same. I’d call her and ask her how she thought it went from her perspective. Did we miss something? Was everything done the way we planned?”

Kelly said the informal conversations he had with people such as Mattern were very helpful because they allowed him to address issues directly with judges and to respond to the coalition to let them know they had had a conversation.

“The purpose wasn’t to prevent people from complaining,” he said. “If someone had a complaint about judicial misconduct that’s a different issue. My big concern was that having uniformity within such a large organization as the Circuit Court was really hard. The best I could do was to stay in contact with the people who use the Courts. This was the only way I could get a sense about what was working and what wasn’t.”

Krueger said she recalls some of these meetings as being “new and vibrant.”

“Reconvening the commission will be a way to get people meeting and talking, and a good outcome for this task force,” she said. Getting people around the table, to build trust and to look at how systems are working, how they’re not working, and how to problem solve around those things.”

Attorney Robin Melone, who was not on the task force but has represented both defendants and victims in domestic violence cases throughout her career, said she understands both sides and agrees there needs to be more collaboration to address the issues.

“I think we need to do a better job of resourcing prosecutors and victim advocates in the court system to deal with the misdemeanor Circuit Court domestic docket,” said Melone, stressing the importance of addressing repeat appearances of people in Circuit Court for domestic violence offenses which she believes demonstrates an inability to engage in healthy relationships.

She cited anger management issues as part of a broad paradigm that often overlaps with substance abuse, poverty and mental health issues.

“None of that is an excuse for committing an offense, but I think we would do better as a community if we better resourced the DV units to respond to those issues,” she said. “[A]s a society we continue to learn and evolve in the ways we respond to different issues that arise and we need to make sure this is an ongoing learning process for our courts. I hope that we can get back to a sense of normalcy and prioritize the education and the learning that helps judges respond appropriately to all of these situations on both sides.”

Amanda Grady Sexton, director of public affairs for the NH Coalition Against Domestic and Sexual Violence, said the coalition is convening a group of stakeholders this summer and fall that will review all of the areas outlined by the Task Force that would require statutory changes.

“We hope to gain consensus on a legislative proposal that could be introduced during the 2023-24 session,” she said. “The coalition has begun conversations with key legislators who are interested in supporting any efforts to improve our domestic violence protection laws.”

Grady Sexton said the coalition was grateful to be able to work with a multidisciplinary team of stakeholders to discuss ways to improve the court system in New Hampshire and to improve outcomes for survivors of domestic violence.

“We believe that efforts to improve accountability and transparency in domestic violence cases must be central to the state’s ongoing work,” she said.

The coalition, which served 13,107 adult and child victims of domestic violence and sexual assault from October 2020 through September 2021, had two members on the Task Force on Domestic Violence Cases: Executive Director Lyn Schollett and Grady Sexton.

Membership of the newly reestablished Governor’s Commission on Domestic Violence, Sexual Assault and Stalking will include: