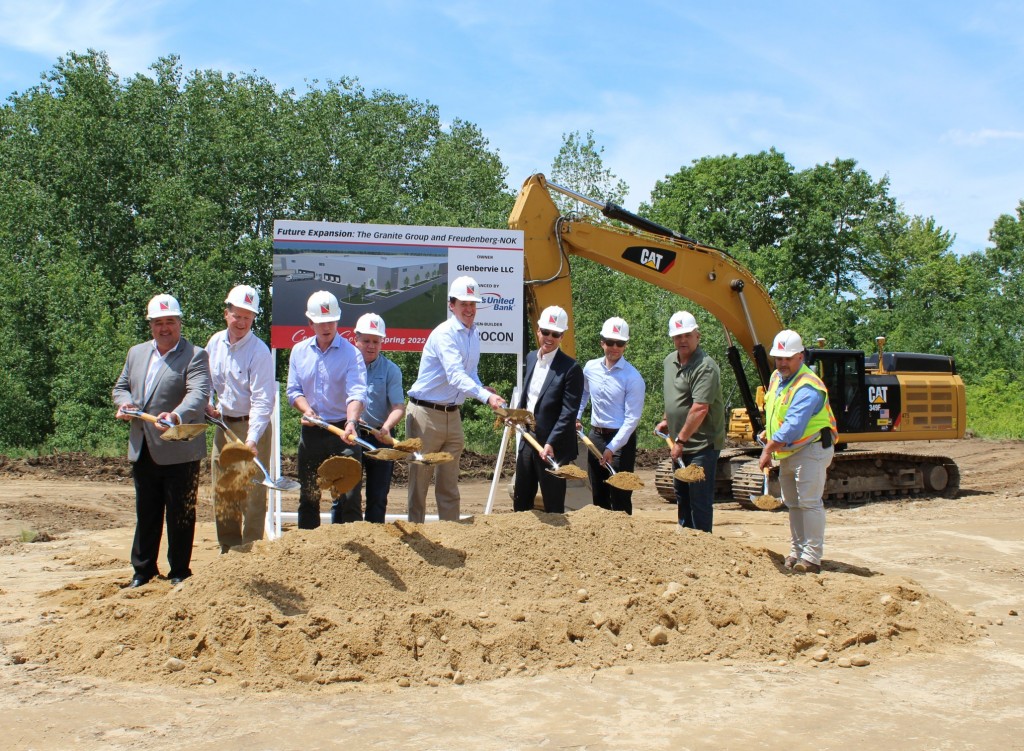 Freudenberg-NOK and the Granite Group’s ground breaking on 64,000 square feet of expansion in Londonderry.

Even though more companies have called employees back to the office, there has been a dramatic increase in the overall vacancy rate statewide, according to Kristie Russell of Colliers International, in the firm’s second quarter analysis of the New Hampshire market.

Conversely, the industrial market, where remote work has not largely impacted its workforce, vacancy rates have tightened, and lack of space and increase in rents is leading to new construction.

In Colliers’s second quarter analysis, it found the vacancy rate in the office market was at 10.2%, 210 basis points higher than the second quarter of 2020. A significant increase was due to Class A space, due to two large tenants leaving the Concord submarket and some new construction projects creating vacancies in the Portsmouth submarket, according to Russell.

Lincoln Financial left Concord and Cigna left moved from Hooksett to a new location in Manchester. On the Seacoast, Liberty Mutual vacated a location in Exeter and in Portsmouth, Wheelabrator Technologies left 100 Arboretum Drive when it moved into 90 Arboretum, where 22,600 square feet of unoccupied space remains.

With vacancy rates still climbing, rents are finally leveling out, said Russell. Rents rose by only 0.2% ($0.04 per square foot) since last year, but, looking over the past two quarters, rents have started declining. On average, the rents dropped by $0.34, or 1.8% since January, Colliers reported.

“With the rising vacancy rates, some investors took advantage of current conditions, acquiring properties at below market value this quarter,” said Russell. “This includes the Chase Block in downtown Manchester, 62% vacant at the time of the sale, which sold for $1.8 million to Elm Grove Realty. Brady Sullivan Properties purchased two vacant buildings – 2 College Park Drive in Hooksett for $2.5 million and the south tower and land at 1 Granite Place in Concord for $3.4 million.”

Meanwhile, the industrial market continues to tighten as the overall vacancy rate fell by 170 basis points and ended the quarter at 3.7%, said Russell. Rents also climbed by $1.32 per square foot since last year, or about 17.5%.

New construction includes a future addition of 32,300 square feet to Lonza Biologics’s current facility at Pease in Portsmouth; Freudenberg-NOK and the Granite Group’s ground breaking on 64,000 square feet of expansion in Londonderry; and LSNE expanding on its property along Commerce Drive in Bedford, constructing a two-story, 28,500-square-foot manufacturing building.