Trump got played by China; Granite Staters pay the price 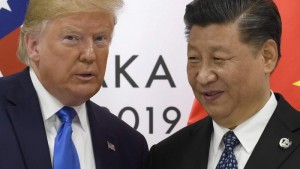 Nearly four years ago, on the eve of the 2016 election, Donald Trump spoke to an audience in Manchester and promised to “stand up to China.” It was a major theme of his campaign, and it proved to be one of the most consequential broken promises of his failed presidency.

He jumped at the chance to cast himself as a tough negotiator, dismissing the dangers of a trade war and promising that China “will give us everything we want.” As it turned out, he wasn’t interested in doing the hard work of strengthening America’s hand or securing a trade deal that would actually help working families. Instead, the author of “The Art of the Deal” let China run circles around him, and Granite Staters are paying the price for his incompetence.

First, Trump’s failed foreign policy with China resulted in devastating economic impacts felt by Granite Staters and Americans from all economic backgrounds. In New Hampshire, Trump’s tariffs have caused the price of steel to increase by 30% since 2018, impacting manufacturers for transportation, electrical equipment, and medical instruments. The tariffs on China have also hit an array of industries across the state, like All Metals Industries in Belmont, Little Bay Lobster Co. in Newington, Moonlight Meadery in Londonderry, and the hardwood industry up north. It’s clear that Trump’s devastating trade war has cost Granite Staters the jobs he promised he would protect.

Second, not only did Trump spark a trade war that proved impossible to win and hurt Granite Staters, but by implementing go-it-alone tariffs, Trump also alienated our allies.

If Trump had been serious about keeping his promise to Granite Staters, he would have worked with our allies to present a united front and maximize our leverage. He would have leaned on the experience of career public servants and others with negotiating experience with China who could force China to the table on our terms. But he was more concerned with securing a superficial political victory than winning anything of substance from China — and China’s leaders were quick to take advantage.

Finally, Trump’s incompetence sparked a national economic crisis. His desperation to cover up his mistakes wreaked even more havoc. He rushed to sign a “phase one” trade agreement that failed to level the playing field for American workers, offering only vague promises to buy U.S. products that still haven’t panned out. There is no plan for a “phase two” and what it would include.

Donald Trump promised to be tough, to strengthen the United States’ economic power, and to leave New Hampshire’s working families better off than when he entered the Oval Office. He hasn’t simply broken those promises – he has inflicted once-in-a-century damage on Granite Staters’ health and livelihoods. His deference to the Chinese government and refusal to put American workers first have left our economy in shambles and weakened our ability to rebuild.

We’ve all served as ambassadors to countries from different parts of the world and in our varying experience, we know that economic prosperity for our state and country are dependent on leaders who understand the intricacies of the global economy, the importance of diplomacy, and who possess the soundness of mind required to make decisions that will impact millions of people – Donald Trump has shown us that he possesses none of those qualifications.

It’s no wonder that, while groveling for help in his re-election, Trump told China’s President Xi Jinping that Democrats would be tougher on China. After three and a half years of Trump’s failed theatrics, we can do better. Granite Staters deserve a president who will truly make America great again by standing up and fighting for us on the world stage. This November, we’re going to get one in Joe Biden.