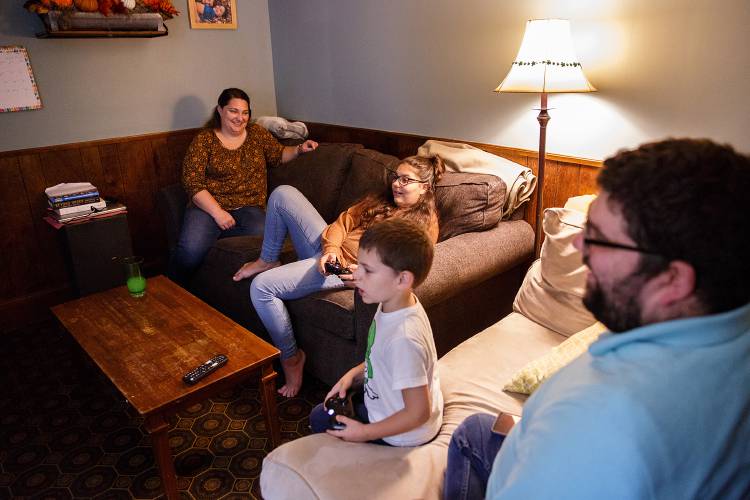 Cassie Audette, left, and her husband Joe Audette sit with their children, Tayla, 12, and James, 6, while they play the video game Minecraft at their home in Claremont. Cassie Audette worked part-time as a chemotherapy compounding technician at the Norris Cotton Cancer Center at Dartmouth-Hitchcock Medical Center until September 30, the last day before a Covid-19 vaccine mandate went into effect across the healthcare system. Photo by Alex Driewhaus/Valley News-Report For America)

Cassie Audette’s last day as a part-time chemotherapy compounding technician at the Norris Cotton Cancer Center at Dartmouth-Hitchcock Medical Center was Sept. 30. That day also was the deadline for Dartmouth-Hitchcock Health’s 13,000 employees to comply with the Lebanon-based health system’s Covid-19 vaccine mandate.

Audette, a 32-year-old Claremont resident, was among those who left their jobs rather than get the shots.

She views the vaccine mandate and her decision not to comply “as a very sharp nudge from God that I needed to stay home with my kids,” she said in a phone interview last week. “I’m taking it as a blessing in disguise.”

If one of her children, Tayla-Ann, 12, or James, 6, gets the sniffles or a sore throat, they have to be out of school for a few days while getting tested and waiting for results, she said. In addition, she’s on alert for a shift to remote learning. These challenges already had motivated her to shift to per diem status in recent months.

“With all of this Covid stuff, it was almost impossible to be a working mom,” she said.

Audette, who had Covid-19 in February, said she wishes D-H had allowed people with “natural immunity” to skirt the vaccine requirement. In addition, as a function of her job in a sterile space, Audette said that she worked in full personal protective equipment near a special air filter, either alone or with one other person, and had no regular face-to-face contact with patients.

She may one day get vaccinated against Covid-19, but she wants to know more about long-term effects of the vaccines first.

Health officials have said Covid-19 vaccines are safe and effective, and that increasing vaccination rates is the way out of the pandemic. The Centers for Disease Control and Prevention has also said the vaccines “offer better protection than natural immunity alone and that vaccines, even after prior infection, help prevent reinfections.”

D-HH, New Hampshire’s largest employer, announced in August that it would require the shots of all employees, including those working remotely or per diem, by the end of September. Employees were allowed to request exemptions on the basis of a disability or qualifying medical condition and on the basis of a sincerely held religious belief, practice or observance, said Audra Burns, a D-H spokeswoman.

As of Oct. 8, “more than 99 percent” of D-HH employees had been vaccinated or gotten an exemption from the mandate, Burns said. Employees who received exemptions will be required to test weekly.

The number of employees who got exemptions was not available, nor was the number that left their jobs due to the mandate, Burns said. She previously said employees who failed to comply with the mandate would be fired on or by Oct. 4.

“We respect the time and consideration our employees gave to taking this important step, and we are heartened that the overwhelming majority made the choice to support and continue the critical work to defeat the pandemic, and to provide the best, safest care possible for our patients, our communities, and one another,” Burns said.

‘I believe in personal choice’

Audette and her husband Joe had relatively mild cases of Covid-19 this winter. She said she was stuck in bed for about two days and later lost her senses of smell and taste. Her sense of smell has not completely returned. She still sometimes has a dry cough and gets heartburn regularly, which seemed to begin with her contracting Covid-19.

She worries that the vaccines may eventually contribute to some chronic illness down the road. She has family members with autoimmune conditions, she said.

When she’s out in the community, Audette said she either wears a face mask, or if she’s unmasked, she socially distances and is sure she’s feeling well.

“I believe in personal choice, but I also believe in common sense,” she said.

She and her husband allowed their 12-year-old to decide whether she would get vaccinated, Audette said. Like her mother, Tayla-Ann has declined the shots, at least for now.

Eventually, Audette said, she hopes to return to work as a pharmacy technician in a hospital setting. That will require that the hospital roll back the mandate or that “enough time has passed” to give her sufficient confidence in the vaccine, she said.

Last week, the Brattleboro Retreat announced that it would require employees to be vaccinated against Covid-19 by Oct. 18, according to the Associated Press. That announcement came after an unvaccinated Retreat employee caused an outbreak there, including other staff and patients. The University of Vermont Health Network has said that 93% of its nearly 15,000 workers at its facilities in Vermont and upstate New York have complied with the requirement they be vaccinated against Covid-19. Three employees resigned rather than comply with the vaccine requirement that took effect on Oct. 1, Neal Goswami, a UVM Health spokesman, told the AP.

Meanwhile, Massachusetts hospitals are preparing to fire hundreds of employees who fail to comply with their vaccine mandates, which go into effect later this month, the Boston Globe reported last week. Hospital officials there told the Globe that they weren’t planning to cut services as a result of the departures, but they were boosting recruitment and retention efforts.

D-HH recently increased the minimum wage from $14 to $17 an hour amid a workforce shortage. On Oct. 6, there were more than 1,000 jobs listed on D-H’s website. The bulk of them, 775, were based in Lebanon. In addition, smaller members of the D-H system have their own job lists, each with dozens of openings. DHMC held an interview day on Thursday.

Audette has worked as a pharmacy technician for the better part of a decade, first at DHMC, then at Valley Regional Hospital in Claremont and then again at DHMC on a part-time basis amid the pandemic and the challenges her children faced amid it.

Because vaccine requirements are in place or pending at other healthcare organizations, Audette opted not to continue working as a pharmacy technician at this time. For now while her children are in school, Audette is working part-time as a shopper for Instacart, which does grocery shopping and makes deliveries for customers.

Leaving her job at DHMC was a “big hit for my family financially,” she said.

Though her husband makes enough money to cover most of their bills through his job selling cellphones, Audette said she had to pick up something in order to cover miscellaneous expenses such as her children’s mental health counseling.

“It was unexpected,” Joe said of DHMC’s vaccine mandate.

The couple had a month to discuss what Audette’s job change might mean for the family.

“Really, it means we’re just not going to be investing going forward,” said Joe, who is 31 and also has begun doing some DoorDash meal and grocery deliveries “on the side.”

They own and live in one section of a duplex and rent out the other. They were considering buying another rental property, but that plan is on hold for now, Joe said.

Audette and her husband have taken divergent approaches to Covid-19 vaccination. Joe opted to get vaccinated due to his risk of contracting the virus while at work. He said he sees about 400 people per month.

“I work with the public a lot,” Joe said. “It was just too much risk.”

Audette said they believe they contracted the virus through Joe’s job in February. His choice to get a shot of the Johnson & Johnson vaccine also was motivated to protect relatives with medical conditions that put them at higher risk of developing serious symptoms should they contract Covid-19.

“I totally get that,” Audette said.

But her husband’s decision on vaccines didn’t sway her. She also was not swayed by webinars D-H offered employees or by conversations she had with her managers.

Her friends and family also have varied positions on the vaccines. She has family members who’ve told her, “Don’t you dare get it.” Meanwhile, she said one family friend has told her that she is unwelcome at his home because she’s unvaccinated.

Like his wife, Joe thinks that vaccination requirements ought to factor in whether or not someone has previously had Covid-19. He thinks he will skip a booster should one be approved for the Johnson & Johnson vaccine.

For her part, Audette said, “I don’t want to inject myself with something … especially something that’s so new.”