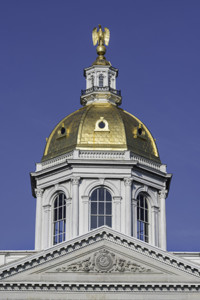 The House Finance Committee this week will be coming up with a budget, which will probably be very different than the one proposed by Gov. Chris Sununu. It will include the trailer bill, which lawmakers may pack with some programs that may not survive on their own as bills. Then there is the capital budget, of much interest to the construction industry. Although crossover day hasn’t officially been reached, committees from one chamber are starting to hold hearings on bills passed by the other. There will be a lot of energy bill hearings, including one seeking to expand net metering for large businesses and institutions. There will also be some bills limiting employers’ authority over their employees.

Finally, the full House is expected to vote on legalizing and commercializing recreational marijuana, allowing municipalities to impose a local rooms and meals tax and increasing environmental fees.

At 1 p.m., the House Finance Committee will begin up to three days of deliberations to come up with and vote on the budget, House Bill 1, and the accompanied trailer bill, HB 2. Expect House lawmakers to either come up with their own versions of programs, included by Governor Sununu in his budget proposal – such as a paid family and medical leave insurance and allowing sports betting. Budget deliberations will continue Tuesday and Wednesday.

At 10 a.m., The House Public Works and Highway Committee will begin their deliberations on the capital budget, HB 25. That also should continue to Wednesday.

At 9 a.m., the Senate Energy And Natural Resources Committee will review the committee will review HB 365, which would increase the maximum project for net metering from 1 to 5 megawatts, allowing larger businesses and institutions to take advantage of that law

At 10 a.m., the same committee will review HB 166, which would require that the system benefits charge on utility bills be used for energy-efficiency programs as well as for “other public benefits related to electricity, including programs for low-income customers such as free LED light bulbs and programmable thermostats.”

At 11 a.m., the House Science, Technology And Energy Committee will review Senate Bill 284, which would establish a statewide online energy data platform regulated by the Public Utilities Commission and operated by the state’s electric and natural gas utilities.

At 11 a.m., the House Resources, Recreation and Development Committee

will look at SB 76, which would prohibit offshore oil and natural gas exploration

At 2:15 p.m., the Senate Commerce Committee will review

HB 223, which would not allow a youth to work more than an eight-hour shift if he or she works two night shifts that week.

At 1:45 p.m., the House Commerce and Consumer Affairs Committee

will hear SB 193 , which would prohibit the sale of certain furniture and carpeting with flame-retardant chemicals.

At 2 p.m., the House Criminal Justice and Public Safety Committee will

hear SB 173, which would make it easier to make a criminal records check for employment and occupational licensing.

At 2:30 p.m., the Senate Health and Human Services Committee will hold a hearing on HB 692, which would require the Medicaid managed care program to provide dental benefits to covered persons.

At 1 p.m., the House Labor, Industrial and Rehabilitative Services Committee will hold a hearing on SB 151, which would establish an administrative hearing procedure and penalty for an employer who fails to make payment of wages or who fails to secure workers’ compensation coverage.

At 2 p.m., the same committee will review SB 197, which would outlaw noncompete agreements for workers who make less than twice the minimum wage.

The full House will vote on the following bills:

HB 120, which would require licensure and inspections of establishments for tattooing, body piercing or branding, massage therapists and massage establishments.

HB 481, which would legalize and commercialize recreational marijuana. The amended bill levies a tax at two levels: a 5 percent tax on the wholesale/cultivator sales price; and a 9 percent tax on the retail cannabis store sales price. This method of taxation is similar to that used for existing taxes on other tobacco products, estimated to raise $20 to $30 million. The proceeds would roughly be split a third for substance abuse treatment and enforcement, a third to aid municipalities and a third for the general fund.

HB 641, which would allow municipalities to charge a local rooms and meals tax of no more than an extra $2 per room night.

HB 682, which would change the wetlands and shoreland review fund to the water resources fund and double many permit fees.