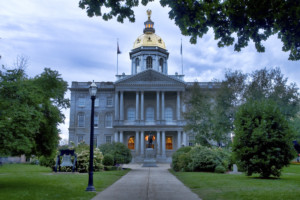 This week there will be hearings on the budget as well as a marathon three-day House session. The big issues: family and medical leave and sports betting. Other significant bills include New Hampshire’s minimum wage, the educational tax credit, plastics, putting the Affordable Care Act into state law, prescription drug prices and net metering and other energy bills.

The House Finance Committee will hold a public hearing on the governor’s budget, HB1, and the accompanied trailer bill, HB2, at 1 p.m. in Representative Hall. The budget would, among many other things:

The Senate Energy and Natural Resources Committee will be hold hearings on three net-metering bills:

At 8 a.m., SB13, which would increase net metering from 1 to 5 megawatts for both renewable generation and storage, with peak demand taken into account.

At 8:45 a.m., SB159 would also increase net metering from 1 to 5 megawatts for renewable generation, and add clauses saying the utility should minimize costs in calculating net meeting rates.

The Senate Commerce Committee will hold a hearings on:

At 1:15 p.m., SB61 would permit a competitor or a union to file a civil action against an employer for violations of a worker’s rights.

The House will pass the following bills all at once, unless they are moved from the consent calendar to the regular calendar:

HB309 would require that a mortgage foreclosure must be served by the sheriff in the county where the property resides, rather than by mail. It also allows a mortgagor to stop a foreclosure via a court complaint rather than petition.

HB657 would make it easier for an individual who is on a low-cost drug to continue to have it covered even if their insurer removes it from their formulary.

HB670 would require health carriers to have access to information about their member’s prescription drug spending.

HB684 would give manufactured housing tenants with the right to challenge a rent increase in mediation that the park owner will have to pay for.

HB695 would require nonprofit organizations that advocate on behalf of patients to disclose any payments, donations, or subsidies from pharmaceutical manufacturers, insurance carriers or pharmaceutical benefit  managers.

HB459 would establish an industrial hemp pilot program. It legalizes hemp, defined as cannabis sativa with a THC content of less than 0.3 percent, by 2020.

HB710 would require a building code to be published two years before adoption and have the Building Code Review Board (BCRB) recommend adoption by legislation. BCRB’ code amendments need legislative approval — vurrently they are effective immediately but expire if not approved in two years.

HB480 would establish sports betting via local retailers (if approved by the municipality) and via the internet, run by the state Lottery Commission.  This version is a bit more detailed then the Governor. 17-2.

HB632 would end the NH Educational Tax Credit, which currently allows business and individuals to deduct 85 percent of what they donate to private school against their business taxes and interest and dividends, respectively. 10-9.

HB700 provides municipalities a standardized methodology for the assessment of utility properties utilized in the distribution of electricity, gas, and water. Unanimous.

HB233 will put most of the Affordable Care Act in state law, in case it is repealed by Congress or overturned by the U.S. Supreme Court, including Essential Health Benefits; guaranteed issue, pre-existing condition; geographic rating premium differential protections for age and no lifetime caps. 12-8.

HB520 requires new public accommodations install and maintain at least one diaper changing station that is accessible to all genders  12-8.

HB560 prohibits stores from providing single-use plastic bags after getting rid of current inventory and prevents them from charging more than a dime for reusable bags. 11-9.

HB628 requires that all newly constructed large public buildings include one universal changing station in a family restroom facility those who have a physical disability. 12-8.

HB664 requires automobile insurance companies to pay for the cost of accident repairs that follow the manufacturer’s recommendations for repair processes. 16-4.

HB703 requires information from pharmaceutical manufacturers relative to the introduction of new, high-cost drugs to the market. 12-8.

HB717 prohibits prescription drug manufacturers from offering coupons or discounts to cover insurance copayments or deductibles when generics are cheaper. 12-8.

HB394 would steeply increase the penalties for crop theft. 18-2.

HB514 imposes a waiting period of seven business days between the purchase and delivery of a firearm. 12-8.

HB121 creates a license for massage, reflexology, structural integrator and Asian bodywork therapy establishments with two or more employees, to combat human trafficking. These businesses will also no longer be subject to various town or city bylaws. 12-7.

SB1 imposes a mandatory employee payroll deduction of a half a percent to fund a Family Medical Leave Insurance program. The bill also lowers the minimum threshold for federal unpaid Family and Medical Leave Act job protections for firms with 50 employees to 20 employees. 12-7.

HB365 would raise the capacity limit on renewable customers-generators eligible for net metering rates from 1 MW to 5 MW, similar to the bill passed last year that was vetoed by the governor. 12-6.

HB464 updates the definitions of solar energy and  wind powered energy systems to include related hardware such as inverters and storage. 12-7.

HB466 will increase the net metering threshold for small customer generators from the current 100 kilowatts to 500. In other words, some large generators will become small generators, and get a better rate. 13-6.

HB568 adds climate change to the concerns to the state energy strategy and expand it beyond just electricity generation to transportation, heating and cooling. 12-7.

HB582 earmarks all the residential revenues from the Regional Greenhouse Gas Initiative (RGGI) to energy efficiency programs while rebating everything back to commercial customers. Currently, only a small portion goes to efficiency while the rest is rebated. 11-8.

HB614 doubles the fines for many air pollution violations and allows the fines to be charged on a daily basis. 16-3.

HB715 requires electric utilities cut peak demand by 2 percent via storage and gives the PUC the authority to up that percentage to 15 percent if it is in the ratepayers’s best interest. 10-8.

SB63 requires insurers to certify on an annual basis to the NH Insurance Department that they are making a percentage of rebates available to their enrollees. 3-2.

SB150 authorizes individuals and certain businesses to purchase health insurance from out-of-state companies. The committee voted 3-2 to kill the bill.

SB206 excludes the costs of lobbying and political activity from the rates or charges of public utilities. 4-0.

SB167 sets up a commission to investigate the cost-effective procurement of renewable energy generation resources. 5-0.

SB 247 establishes the sunny day fund to obtain and disburse grants for research and development and increase commercialization of new technologies.  The funds – up to $15 million – would come from rainy day fund surplus. 5-0.