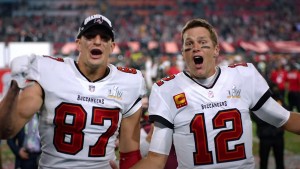 While New Englanders bet heavily on Brady and the Tampa Bay Buccaneers, the New Hampshire Lottery wound up $3 million in the hole on Super Bowl Sunday.

At a Tuesday hearing of the House Ways and Means Committee, Rep. Pat Abrami, R-Stratham, recalled asking Charles McIntyre, executive director of the Lottery – which oversees sports gambling in the state – “How’d we do this week with the Super Bowl?“ only to learn “since it was Tom Brady who was playing it was a disaster.”

Abrami said McIntyre explained that because so many bettors put so many wagers on Tampa Bay in different combinations of games, the state lost money. He said that McIntyre told him he expected the loss, which he called “very temporary,” stressing that “it’s the average for the year that counts.”

“With so much betting going on you’d think it would be a good thing,” Abrami replied, “but it depends on how people bet. There’s a risk associated with this,” he said. “It’s like Vegas. Over time, the house always wins. The way this is structured the state is part of the house. He said that other gaming venues in New Hampshire also reported losses.

Rep. Alan Bershtein, R-Nottingham, noted that sports books adjust the odds to hedge their risk. But Rep. Tim Baxter, R-Seabrook, explained that while New England and New Hampshire bet heavily on the Bucs, DraftKings, which handles the bets, “makes sure it’s balanced nationally, which is a very different thing.”

“Whatever sports books there are in Kansas City,” Baxter said, “they made a ton of money.”

Still, Bershtein said, “it’s a little troubling that the state can lose money on a proposition where we’re not expected to lose money.”