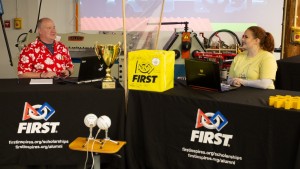 Thirty-five high school robotics teams with a total of nearly members recently participated in the third annual Governor’s Cup FIRST NH Robotics Event, a virtual event this year. Shown are Dave Price, chief of Greenman-Pedersen Inc. and a longtime FIRST volunteer, and Cambria Hobbs, a Plymouth State University student, as they comment on the action from the FIRST Update Desk at Plymouth State University’s Makerspace. Winner’s of The Governor’s Award were Chop Shop of Merrimack, The Force Team of Hollis and the Cardinals of Nashua.

the companies taking part were: Clairways, which uses artificial intelligence to address long-term changes in respiratory health; CPR Therapeutics, which has developed an advance technology device to automate giving CPR; Insight Surgical Technologies, which has developed an intraoperative stereovision for guidance during surgical procedures; Lodestone Biomedical, which is developing treatment-response monitoring tools for the tumor-immune microenvironment; Nanopath which is developing technology that harnesses bioengineering and nanotechnology to specifically detect viral, bacterial and fungal pathogens in complex biological matrices; Reia, a healthcare startup focused on improving the treatment experience for people with pelvic organ prolapse.

The Upper Valley MedTech Collaborative was launched in January 2020 as a peer-to-peer group that provides networking opportunities. For more information, visit uvmtc.org.

Donald Spence has joined Exeter-based Vapotherm’s board of directors. Spence most recently served as president and CEO Officer of Ebb Therapeutics, before retiring in August 2019. He will serve as a member and chair of the Vapotherm board’s compensation committee and as a member of the audit committee. In addition, Vapotherm announced that Craig Reynolds and Geoff Pardo have resigned from the board.

UScellular has donated new computers and programs and a 3-D printer technology devices to the Boys & Girls Club of Manchester to help the club offer a mix of in-person and virtual programming during the new school year and make it easier to communicate with kids, teachers and parents.

Two Dartmouth Collegeengineering professors recently received awards for research pilot projects from the New Hampshire Center for Multiscale Modeling and Manufacturing of Biomaterials (NH BioMade), which is supported by the National Science Foundation to advance the design and manufacture of biomaterials used in medical applications and to address industry and clinical needs.

Professor Yan Li received more than $75,000 to fund her project, which aims to design new polymer-derived ceramics to potentially replace metallic materials in biomedical applications. Professor William Scheideler was awarded more than $70,000 to fund his project, which aims to develop porous sensors to monitor the inflammatory response to implanted biomaterials, with the goal of furthering understanding of the human immune response.