Mentoring to be topic of next Power Breakfast, MuShield completes expansion … and more 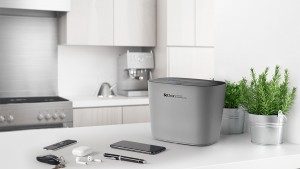 SoClean of Peterborough has introduced two new household products for killing viruses and bacteria. The company said its SoClean Air Purifier eliminates up to 99.9999% of airborne viruses, bacteria and allergens, providing next-generation air purification that far surpasses HEPA standards. Its SoClean Device Disinfector kills up to 99.9% of bacteria and viruses on high-touch everyday items, such as smartphones and key fobs, it said. The two products are the first in a series of consumer items the company plans to release this year.

Merchants Fleet Senior Vice President and Chief Technology and Digital Officer Jeanine L. Charlton will be the speaker for the next TechWomen|TechGirls Virtual Power Breakfast, to be held beginning at 7:30 a.m. Wednesday, Aug. 12. Her topic will be “Supporting the Next Generation of Tech Women Through Mentorship.” She’ll offer some practical tips on mentorship, both for prospective mentors and mentees. For more information, click here.

BAE Systems has received $179 million in total awards from the U.S. Army as part of its effort to build its next-generation missile warning system. The system provides aircrews with advanced threat detection capabilities, improving survivability and mission effectiveness in contested environments. Work on the system will be done at BAE Systems’ facilities in Merrimack, NH, and Huntsville, Ala.

The National Cancer Institute (NCI) awarded two grants which will support the efforts of two research teams at Dartmouth-Hitchcock’s Norris Cotton Cancer Center that are working on coronavirus-related projects. The first grant, for $204,000, will be used for research surrounding factors that enhance the capacity and sustainability of telemedicine for rural cancer patients. The research will be co-led by cancer population scientists Drs. Tracy Onega andAnna Tosteson. The second, $328,000 grant will fund research co-led by the NCCC laboratory of Paul Guyre, who has a 35-year history of studying antibodies and the receptors on human cells to which they bind, and by Steven Fiering, professor of microbiology and immunology at the Geisel School of Medicine at Dartmouth and member of the Immunology and Cancer Immunotherapy Research Program at NCCC.

MuShield Company has completed an expansion project at its manufacturing facility in Londonderry. The 12,000-square-foot expansion adds 6,000 square feet of new manufacturing space, eight new offices and a magnetic testing room to bolster specialized magnetic shielding operation and service. “This is a big deal in the forward progression of our company,” said Luke Grilli, MuShield’s vice president of sales and marketing. He said 20% of the increased footprint will serve as the new home of MuShield’s newly acquired Solar Vacuum Furnace, which will be used to conduct heat-treating mumetal magnetic shields and stress relieving hydroformed components.  The company was recently presented with a Silver Tier Supplier Award by BAE Systems.

Twinstate Technologies has announced the addition of Audra Luck Squier to its staff as technical solutions consultant.

MarketReach Inc.,Nashua, a provider of creative services for technology companies, recently won two NYX Awards. One was a Gold Award in the Marcom category for an interactive trade show installation the firm created for Hewlett Packard Enterprise. The second, a silver, was for a product video made for Dell Technologies.

Radianse, a Dover-based provider of internet of things solutions, has unveiled task-scheduling and management software that its says allows businesses to streamline, schedule and monitor all activity surrounding sanitation and cleanliness at its facilities as a response to the Covid-19 pandemic. The software allows employees to meet the cleaning requirements of a facility while detailed reporting and history provides a clear view into the running of operations, the company said. It is accessible by any computer, smartphone or other web-enabled device, the firm said.

BAE Systems has honored Wilcox Industries Corp., Newington, with a Gold Tier Supplier Award for what it said were exceptional performance and contributions to supply chain success in 2019, Wilcox was selected from a pool of more than 2,200 suppliers that worked with the sector in 2019.