Take me to the river

Concord sees link to Merrimack with I-93 project

As the NH Department of Transportation puts the finishing touches to its plans to widen and improve Interstate 93 through Concord — a nagging bottleneck, particularly during tourism season — city officials intend to explore the prospect of fulfilling the longstanding vision of creating a direct interface between the downtown precinct and the Merrimack River.

After lingering on the 10-Year Highway Plan for more than three decades, work could get underway as soon as 2026 and be completed as early as 2032. Altogether the project is estimated to cost $282.9 million and another $15 million in state, federal and city funds for widening the Loudon Road bridge.

The highway was built as a four-lane, limitedaccess road between 1956 and 1963 as part of the F.E. Everett Turnpike and interstate highway system. At the time, it was projected to carry 20,000 vehicles per day within its design life of 20 years. Today, some 75,000 vehicles pass through the corridor daily, a number that may top 85,000 on weekends during the summer months and ski season. At its peak, northbound traffic may back up as far south as the Hooksett tollbooth, seven miles away, while southbound traffic may be stalled as far north as Penacook for five miles or more.

The bounds of the project reach from south of the junction of I-93 and I-89 in Bow to just south of the Merrimack River Bridge, a distance of 4.5 miles. Traffic through the I-93 corridor is augmented by flows from two connecting interstates — I-89 to the west and I-393 to the east — as well as by intercity trips. 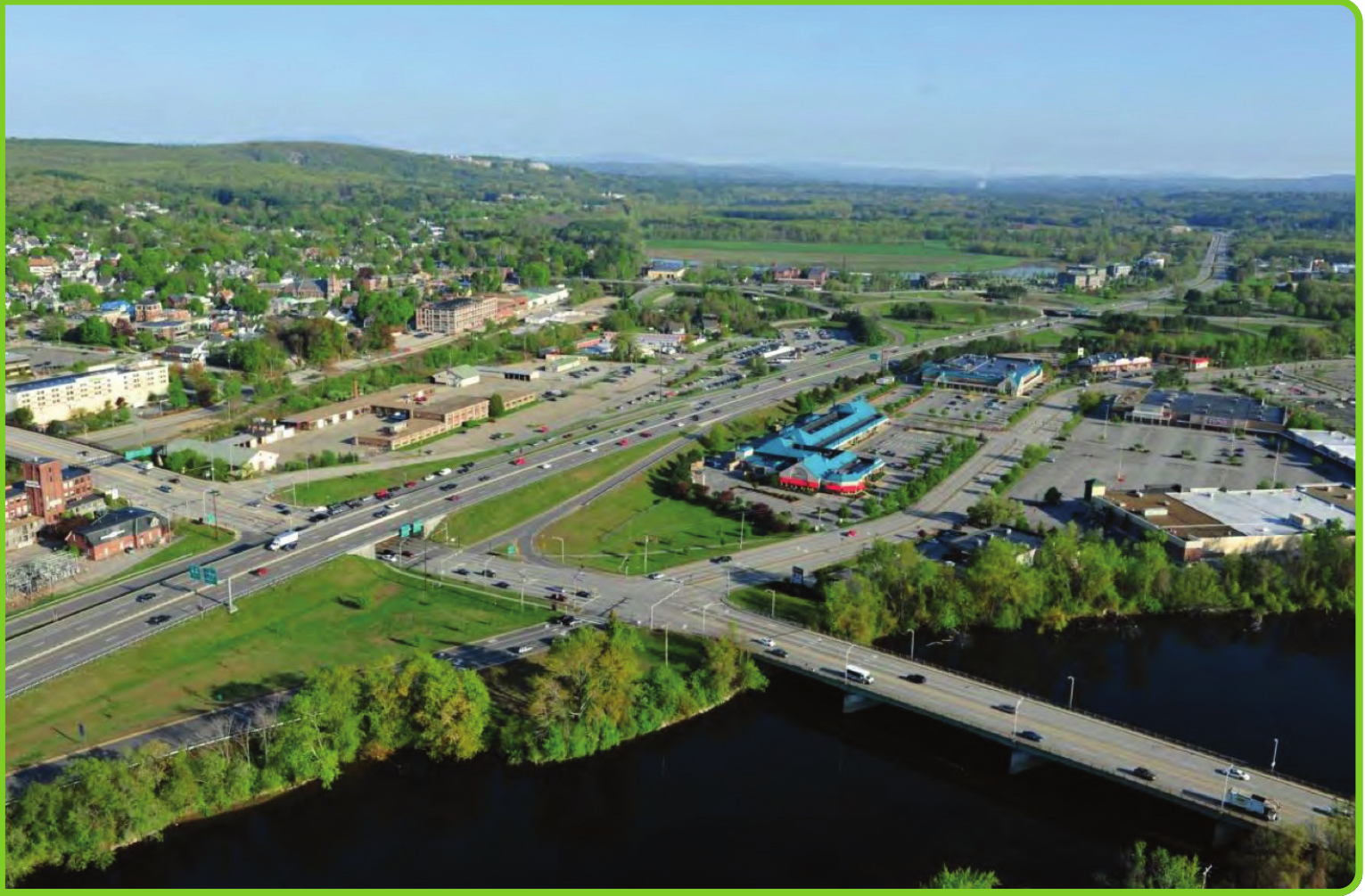 The project’s primary goal is to increase capacity by widening the highway from two to three travel lanes in both directions, with a fourth auxiliary lane in each direction between each of the interchanges. At the same time, the project includes measures to reduce the risks of accidents arising from inadequate distances between interchanges.

At several locations where vehicles both join and leave the highway and cross paths with one another, the weaving distances have been deemed inadequate. At others, vehicles leaving the highway lack sufficient distance to slow their speed to negotiate the curved exit ramps safely.

Besides reconfiguration and reconstruction of all seven interchanges, the project also includes the rehabilitation of six Red List bridges, one in Bow and five in Concord.

Ever since the project was added in 1990 to the state’s 10-Year Highway Plan, city officials and civic groups have taken it as an opportunity to reconfigure the center of the city by forging a functional and visual relationship between the downtown precinct and the Merrimack River.

Speaking at a public hearing in 2018, City Manager Tom Aspell described the project as a “once-in-alifetime opportunity,” a remark heard often before and echoed ever since.

A Merrimack River Charette in 1992 explored various means of integrating the city and the river, recognizing that the widening of I-93 could foreclose some or all of the feasible options, among them providing a gateway to the city with a streetscape facing the river.

Five years later, the city’s Downtown Plan proposed ”raising the highway on a bridge to allow passage beneath it to the riverfront.”

In 2001, 20/20 Vision for Concord envisioned depressing or elevating the highway to access the riverfront from downtown by a bridge or underpass as the centerpiece of developing an “Opportunity Corridor,” three miles of under-developed property running parallel and between Main Street and I-93. Alternatively, a riverfront embankment could be created by relocating the highway westward.

As the NH Department of Transportation pursued the planning process, it became clear that the project would be limited to widening the highway and improving the interchanges largely within the footprint of the highway corridor. However, NHDOT agreed to include the Merrimack River Greenway Trail, a paved walking and cycling path along the east bank of the river, within the limits of the project.

The trail is planned to run through the city, from Pembroke to Boscawen, for 12.7 miles, 6.8 of which will track an abandoned rail line. The stretch in the I-93 corridor begins near Exit 13 and follows the river to Exit 14, where Loudon Road, the major eastwest artery, joins the highway and crosses the river. 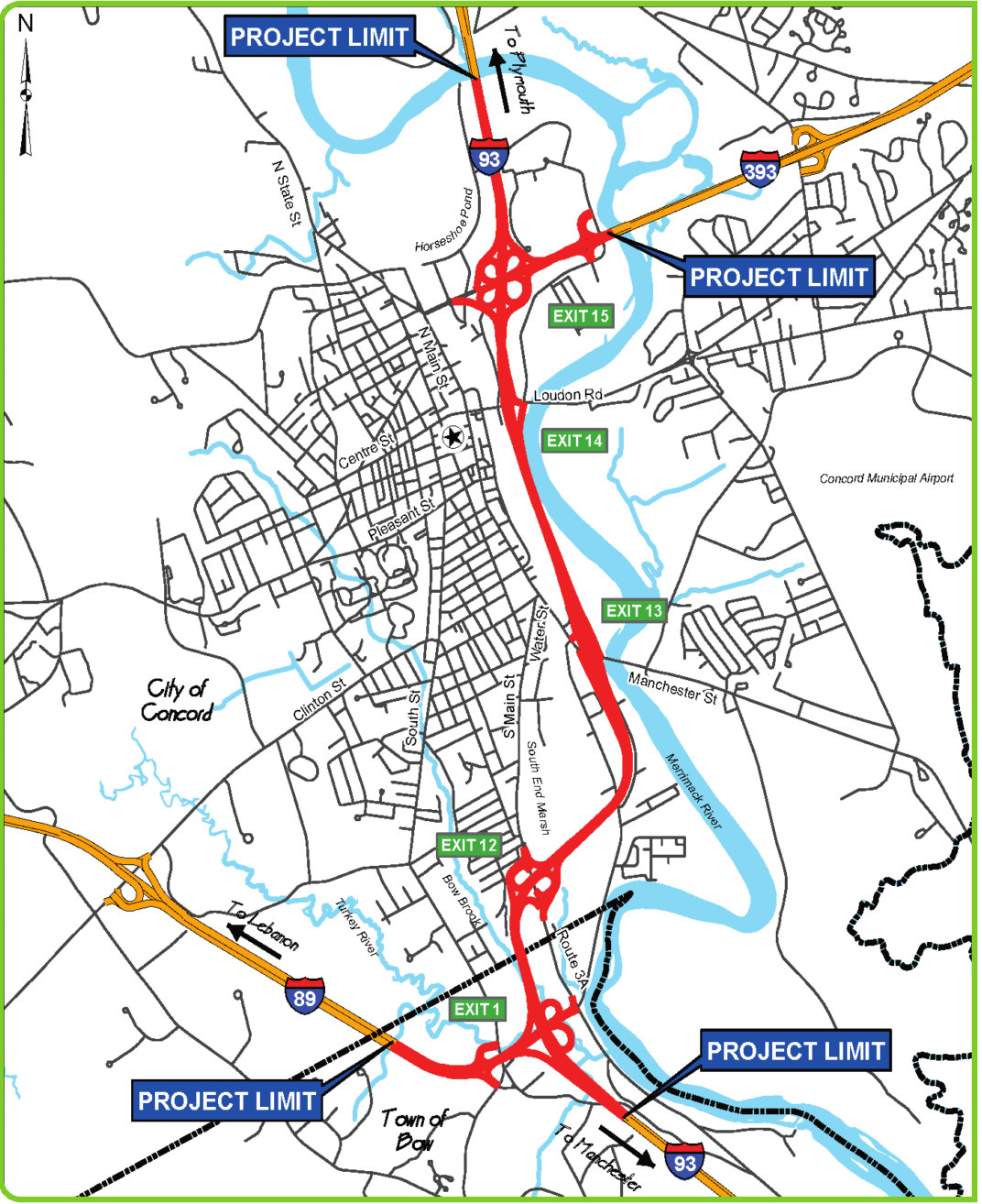 The Loudon Road bridge will be widened to carry a 14-foot-wide shared-use path on the north side and a six-foot-wide sidewalk on the south side. The Greenway Trail will loop under the bridge, where a ramp will connect it to the path on the north side of the bridge. After crossing the river, the trail will take an as yet undetermined route through the north end of the city and ultimately connect to the Northern Rail Trail.

Meanwhile, at the initiative of the Concord Greenspace Coalition, a volunteer civic organization, the Transportation Policy Advisory Committee has recommended that the Concord City Council reconsider a more robust connection to the river in the form of a deck park. The park would be anchored in downtown, span the highway, front the river and connect to the MRGT on the east bank by a pedestrian bridge.

Reporting to the council in October, TPAC recommended that it hire a consultant to prepare a feasibility study and conceptual designs for a deck park over part of I-93, along with a pedestrian bridge crossing the river. The project would be undertaken and financed by the city.

Jason Ayotte, the project manager for NHDOT, told the council that his team, together with McFarland Johnson, the department’s consultant on the project, would collaborate with the city and its consultant to determine if such a project would be feasible as well as on the design criteria it would have to meet.

“Now is the right time to consider this proposal,” he said.

Three decades after making its debut on the state’s 10-Year Highway Plan, the project to widen Interstate 93 through the Concord corridor finally appears to becoming a reality. But whether expanding the capacity of the highway will ease the congestion that has once again earned the capital city the sobriquet of the “Concord Bottleneck” remains a lingering question.

For instance, after analyzing the traffic counts on a Friday in July, Concord Monitor reporter David Brooks found that “two-thirds of the time during the busy period of the day (8 a.m. to 6 p.m.), the traffic count was below the road’s theoretical maximum” and concluded, “adding another lane is a complete waste of money for all those periods, not to mention the 90 percent of the rest of the week when traffic counts are lower.”

But there is concern in Concord that when congestion mounts along I-93, motorists increasingly turn to their GPS to find ways around it, which leads to heavier traffic on secondary roads and neighborhood streets.

“93’s problems become all those other roads’ problems,” City Manager Tom Aspell told the Concord City Council at a recent meeting, “and my concern is that it is going to keep growing.”

“This corridor is a constraint,” said Gene McCarthy of MacFarland Johnson, consultants on the I-93 project.

McCarthy, who lives in Hooksett and commutes to Concord, said he often finds himself taking back roads when traffic on the highway is at a standstill. “Congestion leads to diversion, and the parallel corridors are affected.”

In 1945, “breaking the Concord bottleneck” was a priority for state highway engineers and Concord city officials. The Daniel Webster Highway — Route 3 — then the major north-south route in the state, passed through the heart of the Capital City.

To ease the congestion, city and state planners proposed the “Concord Throughpass.”

Beginning where South Main Street meets the river, Route 3 would be relocated east of downtown, bearing northward between the railroad yard and the river past Bridge Street before turning westerly at Ferry Street and joining North Main Street at Bouton Street. The project was estimated to cost $425,000, of which the city would contribute $25,000.

The “Concord Throughpass” was never built.

Instead, in 1954 the Legislature authorized construction of the F.E. Everett Turnpike from Nashua to Concord, which reached Manchester Street at the south end of the city in 1957. By then, work on I-93 was underway, and in 1958 the stretch of the turnpike from Hooksett north through Concord was incorporated into the interstate highway system.

And for the past three decades, the NH Department of Transportation finds itself once again seeking to break “the Concord bottleneck.”