In BIA webinar, he also says he’ll be extending his emergency order past May 4 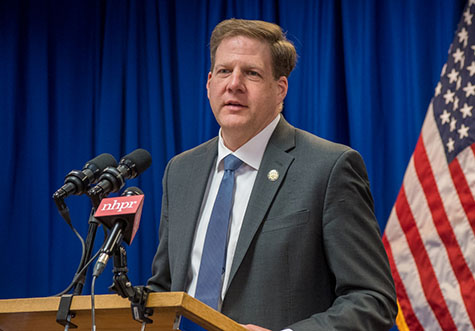 Gov. Chris Sununu told a webinar for 350 New Hampshire business leaders Thursday that he had heard earlier that day from a restaurant owner in Laconia pleading with him to “open up, open up, open up” the economy. Then, an hour later, he heard from city officials in Laconia urging him to “be extremely cautious” in considering when to lift his stay-at-home order,

“Two polar opposites, the very same town,” he said. “It’s a very weird situation. A very bad situation, and we are nowhere out of it.”

That situation, of course, is the coronavirus and its effect on the economy, and Sununu fielded a wide range of questions – ranging from business taxes to how essential businesses can get the assistance they need –

during the webinar hosted by the Business and Industry Association of New Hampshire.

On opening the economy

What will happen on May 4, the day Sununu’s emergency order ends?

“The state is not going open up on May 5. We are just not there yet.”

The state has convened a task force to figure out how reopening is going to happen. Representatives of each industrial sector will essentially write its own reopening plan, including how to operate with social distancing, protective equipment and other preventive measures.

“We start to plan,” the governor said. “But we may not move on it for weeks, maybe not for months.”

The problem is that “we are flattening it [the curve], but it is not going down,” he said. Indeed, over the last two days there were nearly 180 new cases reported in New Hampshire. And while he agreed with one questioner that deaths and hospitalizations are a better indicator, because the number of cases are partly determined by the amount of testing, New Hampshire has to be extra careful because it is so close to Massachusetts, one of the nation’s coronavirus hot spots.

Sununu said he can’t shut down the Massachusetts border because of the “pesky Constitution,” but “they are crawling out of their skin” to get out of Massachusetts, and “if you give them any reason to come they are going to come.” That’s why, he said, the state needs to be “vigilant in keeping things closed.”

The other hurdle is the state’s ability to ramp up testing. There was some good news on that front. Under the new federal economic relief package passed by Congress on Thursday, New Hampshire will get an extra $17 million for testing, according to a press release from the state’s congressional delegation.

But Sununu said that it isn’t just the money. There is a limited amount of equipment and supplies available, and most of that is being directed to hot spots like New York and New Jersey.

As for opening up golf courses, he said, “it’s only spring. There’s still plenty of time to swing a club. Relax everybody.”

Under the last budget deal, the rates of the business profits tax and the business enterprise tax are supposed to go up or down depending on whether revenue rises or falls more than 6% of budget projections. If revenue falters, the BPT rate would go from 7.7% to 7.9% starting Jan. 1, 2021.

Sununu now expects a $500 million to $700 million budget gap, and in a follow-up letter after the webinar, he said he expected that the tax trigger would happen. “Increasing taxes on businesses when they are hurting financially is very dumb,” said the governor.

House Speaker Steve Shurtleff, D-Concord, was noncommittal on the situation. “I would love to speak to the governor about it before I make any comments,” he said.

But Rep. Susan Almy, D-Lebanon, chair of the House Ways and Means Committee, opposed putting off the trigger, at least at this point. “How are we going to fund the basic functions of the government his year?”

Besides, she said, the audit that would trigger the tax increase won’t be completed until October, and maybe later, given that the Department of Revenue Administration has pushed back the tax filing deadline as well as other complications caused by the virus. Indeed, the Legislature is still trying to figure out how to even meet.

“We have plenty of time to deal with this,” she said. “This isn’t a priority right now.”

“All manufacturing is essential,” Sununu told the webinar audience.

Most have remained open, according to a long list of those businesses allowed to remain so during the crisis, when Sununu ordered non-essential businesses shut. But this was the first time he stated it so unequivocally.

He was then asked how factories and other essential businesses are going to get workers and personal protective equipment.

And, with a weekly federal enhancement of $600 added to state unemployment benefits until July 30, companies are having trouble getting people to come into work when they can make more money staying home. Could the state do anything about it?

“I nearly fell out of my chair,” Sununu said when he had first heard the size of the enhanced benefit. He said he would favor a gradual reduction of those enhanced benefits going forward, but no, “the state participates or doesn’t, and I’m obviously not going to leave all that money for our citizens on the table.”

As for PPE, and testing for that matter, the priority has to be healthcare providers, he said. If a company can’t get PPE and it is approaching an emergency situation, it should contact the town’s lead emergency official, who would them pass the request along.