For 2016, the requirements bar is lowered

If you’re a business owner with the equivalent of 50 to 100 full-time employees, get ready for the Affordable Care Act, which will likely affect you, more than anyone, for the first time next year.

The time to act to put off the effects? You just missed it.

But it will be the approximately 1,000 New Hampshire firms that employ 50 to 100 full-time equivalents – a total of about 70,000 employees – that will be feeling the ACA’s full effect for the first time.

That might be a big surprise to many, since the ACA has gotten very little publicity in its third year, leading many to think that the most onerous provisions would be delayed again, perhaps forever.

“Folks should not put this off,” said Steve Gerlach, an attorney with Bernstein Shur and national expert on the ACA. “I know I say this every year, but the last postponement is over, and I don’t anticipate another one. This is complicated stuff. A lot is at stake and there is a lot companies need to do.”

Here are just a few of the major changes that directly affect the New Hampshire group market that will go into effect next year:

A new complicated tax form that every business with more than 50 FTEs has to fill out.

Those who have between 50 and 100 FTEs have to provide coverage, or pay a penalty – more than doubling the number of companies under the employer mandate.

Coverage requirements and penalties for not meeting them have increased for all firms over 50 FTEs.

Those mid-sized firms – unless they renewed their policy early – will also be subject to many large group coverage requirements for the first time, including list billing.

Employers with 50 to 100 FTEs can now join the Small Business Health Options Program insurance exchange, which should offer employee choice next year, but most of the subsidies for smaller employers will run out.

A major new player in the group market and a rollout of “Uber medicine” by the state’s largest insurer.

New stiff penalties for companies who contribute to their workers’ coverage on the individual exchange.

There are also some major changes in store for the individual market, which will be examined in the next issue of NH Business Review, just in time for the start of open enrollment, which begins on Nov. 1.

When employees first see the new 1094-c and 1095-c forms – just released in their final form in mid-September – the response, said Gerlach “is like a deer in the headlights.”

The ACA requires that all large employers – and starting in 2016 that means those with more than 50 full-time employees – have to document to the Internal Revenue Service that they provide affordable coverage for both employers and employees, in order to avoid penalties.

When filling out the forms, you can’t just attest to offering health coverage. You have to provide a code labeling the minimum coverage you are offering for each employee, for each month and provide information that the employee was working full-time that month.

The requirements are even greater for companies that self-insure, who have to provide information on each dependent.

“They are ridiculous,” said Josh Robinson, president of Checkmate Workforce Management Solutions in Concord. “You have to show the least expensive of single coverage for every single employee. But the most onerous part is you have to do this every month.”

And at the end of the year, you have to give the information to employees. Think of it as a kind of complicated W-2, multiplied by 12, because you have to break it down by month.

The law defines a full-time employee as someone who works 30 hours a week – or 130 hours a month. Then, for part-timers, an employer has to add up all of the hours they work in a month, divided by 120, and add that number to your FTE. But don’t try to do this yourself, because you have to work with averages, a look-back period and something called a control group, in which you have to add up the FTEs at a group of sites.

Those with more than 50 full-time equivalents now have to deal with the employer mandate, which was going to go into effect in 2014, but was delayed for 2015, and then limited in that year to businesses with over 100 employees. That threshold drops to 50 on Jan. 1.

There were at least 927 private firms in New Hampshire with between 50 and 100 employees, employing about 63,000 people, according to the state Department of Employment Security. Some 35,000 businesses with fewer than 50 employees will not be subject to the mandate.

Yet, thus far, the reaction has more muted then in 2014, when the law was still challenged both in the courts and Congress.

“Everybody accepts that it is here to stay,” said Ray White, president of Cornerstone Benefit and Retirement Group Inc. in Bedford.

“There is less bitching and moaning,” said Robinson. “They got over the tantrum and focus on the new reality. ‘This is what we’ll have to do.‘ Either that or ignore it.”

But ignore it at your peril. More has changed than just the threshold. In 2015, employers were required to offer affordable coverage to 70 percent of their workforce. Next year, the requirement will be 95 percent.

The penalties are the same: $3,000 for every employee who gets a subsidy on the health insurance exchange, or $2,000 per FTE. But in 2015 – when the law applied to larger employers – the first 80 employees were excluded from the calculation. In 2016, only 30 are excluded. That’s a big difference for the over-100 FTEs set, though it’s still a substantial break for those with closer to 50 employees.

But the greatest impact for those 50-to-100-employee firms might not be that they offer coverage, but the coverage they will be required to offer.

Those that renewed their policy by Oct. 1 may have delayed these requirements. But the rest will now be considered large businesses, and must offer ACA-compliant plans starting in January.

Those plans have to fit in one of the “metal” categories, as on the individual exchange. And insurers can only rate based on age, group size and whether an employee is a smoker. This could mean savings for some firms, but steep increases for those with an older workforce with smokers.

Perhaps the biggest difference will be the advent of list billing for mid-sized firms. Previously, most insurers just issued a flat rate, whatever it cost to actually insure them. In 2016, insurers will now bill those firms for each employee separately, leaving it up to the company to pass that differential on to their workforce, or for the employer to offer different subsidies so every worker will pay the same.

There is a possibility that the ACA coverage requirements – not the mandate – might be postponed, even for those that missed the Oct. 1 deadline, if some fast-tracked legislation in Congress passes.

On the plus side, those employers with more than 50 employees can now join smaller businesses in buying group coverage on the exchange through the SHOP.

That may not have mattered much in the past because the generous tax breaks – up to 50 percent of the business’s premium contribution – that come with the SHOP are only for firms with less than 25 or fewer employees with average wages less than $50,000. The smaller the company and the lower the average pay, the bigger the subsidy.

And employers can only take the SHOP tax credit once, for two consecutive years. Indeed, the big news in 2016 for many that are enjoying that tax break, will now have to decide whether to continue the coverage without the subsidy. 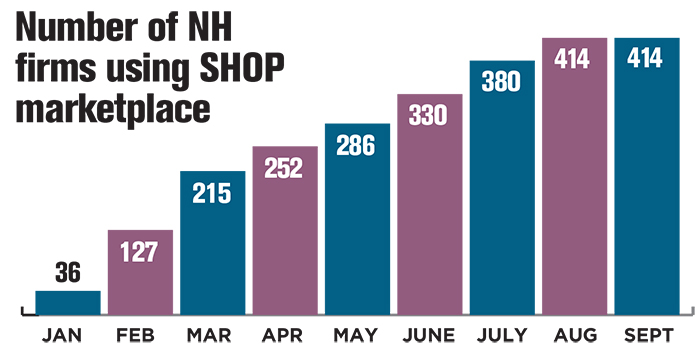 That – and the fact that SHOP was never heavily promoted – meant that it was rarely used. In September, for instance, 414 groups enrolled on the SHOP in New Hampshire, with a total of 3,000 members, though that is more than a tenfold increase from January.

About half of those firms belong to Maine Community Health Cooperative, which is bullish on the program.

There is even more interest in the SHOP now that a long-awaited feature – employee choice – may finally go online during the exchange’s open enrollment period, starting Nov. 1.

With employee choice, each employee can pick a policy via the exchange – and there will be a lot plans to pick from.

It could be funded like a 401(k) plan, with an employer-defined contribution, giving the employee the freedom and angst about what network to go with, what level of coverage, and how much he or she is willing to pay in premiums versus deductible.

“That could be pretty powerful, if it works,” said White, alluding to the disastrous computer glitches during the rollout of individual choice. “You want to be careful. You don’t want to be the lab rat.”

Of all the changes in the New Hampshire group market, perhaps the most significant is that it is shrinking, as employers consider getting out of the health care business altogether. But the decrease is not as dramatic as you might think.

White too heard a lot of grumblings last year about people “who are sick of doing health care and want to get out of it.”

At first, he thought about a quarter of his clients would go that route. Now it looks like 10 percent or less. That’s partly because the economy improved and the labor market is more competitive, so employers can’t afford to not offer health insurance, he said.

Besides, there is a new regulatory barrier. If you contribute to your employee’s individual exchange policy with pretax dollars, you could face a penalty of $100 per day per employee (or potentially $36,500 per employee).

So if you want an employee to buy an individual policy on the exchange, give him or her a raise.