Stock in 430,000-square-foot Landing at One Chestnut mill building priced at $250 a share 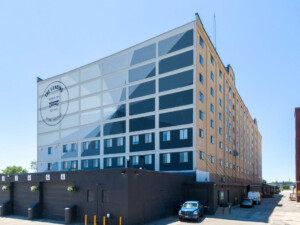 The Landing at One Chestnut in Nashua

A New York-based real estate investment firm that sells shares of commercial properties through public offerings has launched a new vehicle for investors: the Landing at One Chestnut, a property in Nashua.

The company – which has issued two previous IPOs for similar properties, one in New York City and the other in Portland, Maine –  announced the launch of the Landing at One Chestnut IPO on Nov. 29. The initial per-share price for the 430,804-square-foot mill building was $250. Built in 1915, the building has warehouse, distribution, flex office and self-storage uses, LEX said.

The building currently has more than 50 tenants, the four largest of which occupy over 57 percent of the net rentable space and have an average tenure at the property of over 25 years, according to LEX.  In fact, the largest tenant is Extra Space Storage, one of the country’s largest self-storage operators, which has been located at the property for over 30 years.

“The building’s owner-operator, Manzo Freeman Development, has a long track record of making distributions,” LEX said in its IPO announcement. Manzo Freeman is based in Burlington, Mass., and has developed several commercial and industrial projects around the Bay State. One Chestnut is its first New Hampshire property.

LEX’s other properties are 286 Lenox Avenue in Manhattan, which went public earlier this year, and the Gateway Garage in Portland.