Eckman Construction took a vision and transformed it into a community and intellectual meeting space for future generations of Saint Anselm students to enjoy. 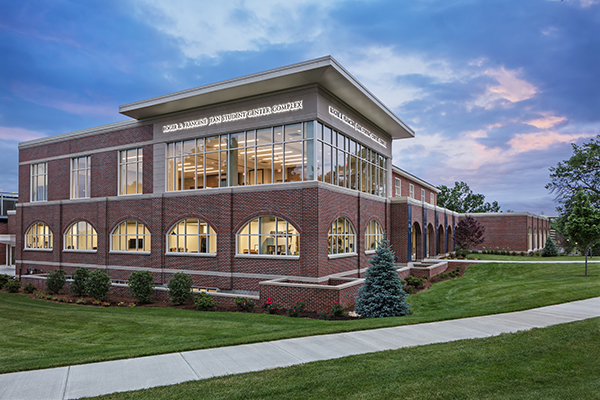 When Eckman Construction began work on the new Roger and Francine Jean Student Center Complex on the campus of Saint Anselm College in the fall of 2016, there were a few unique challenges — not the least of which was creating a space that reflected the long and respected traditions of the Manchester college.

“One of the things that was great about the project is the architect brought a fresh look to the building and yet still honored the Benedictine tradition which is reflected in so many buildings on campus,” Eckman Construction Vice President Preston Hunter says. “But it also introduced contemporary design elements which are more in keeping with the interests and needs of today’s students.”

Completed this past spring, the Roger and Francine Jean Student Center Complex is a 53,280-square-foot building in the heart of the campus, on the site of the former Cardinal Cushing Student Center, which was built in 1960. The new student center is now home to a variety of organizations, including the health center, mail services, student government, the internship office, career services, the study abroad program, the Meelia Center for Community Engagement and an academic resource center. It also now includes a new book store, a 260-seat auditorium, a Starbucks café, study areas, gathering spaces and a game room — all illuminated by natural light, thanks to the expansive windows looking out across the campus and providing one of the best views from the Hilltop.

“It was outdated, but highly utilized by the college,” Hunter says of the old structure, which had undergone only minor renovations since 1967. “There were a lot of different organizations and programs in the building. It really was the hub for all student activities on campus, but it didn’t really reflect the way the college was using it, and it didn’t provide the spaces the students were looking for these days.”

The project — part renovation and part new construction — involved demolishing nearly half of the old student center and then building around all four sides of what was left. The remaining 20,000 square feet was gutted and stripped down to the original structure in preparation for the rebuild of the new complex.

“In the 1960s, the structures were very robust, so it was worthwhile to save the bones of the portion of the building that could be repurposed or adapted to meet the new program and the new use,” Hunter says.

That portion of the process involved saving a central piece of the structure, which had a historic slate tile hip roof. Eckman then began new construction of roughly 25,000 square feet around the remaining portion — a process that involved technical challenges. High-wall basements, which were necessary due to the sloping site, and working right up against the occupied Stoutenburgh Gymnasium meant ensuring continued egress.

Additionally, as with any renovation project, there were unexpected discoveries that necessitated creative solutions.

“We discovered there was a data hub for the campus network located in the corner of the basement portion of the existing building that was scheduled to be demolished,” Hunter says. “This was a mission-critical piece of equipment for the campus, so we built an entire concrete bunker around this equipment and kept all of the wiring and the fiber optics live throughout the demolition and construction process.”

Eckman brought a lengthy relationship with Saint Anselm to the project. The student center was the 15th project the Bedford-based construction company has completed for the college. It marked the fourth Saint Anselm project for Senior Project Superintendent Mike Tremblay and it was the seventh that Project Manager Brian Baroody helped lead on campus. Project Executive and Eckman Vice President John Deloia was responsible for seeing the entire project through, from pre-construction through cost estimating, technical support and finally construction. It was also his seventh project at the Manchester campus.

“This was certainly an enjoyable, fun project for our team because we always enjoy working with clients with whom we have a strong relationship,” Hunter says. “You know what the college wants, you know what the expectations are, and there’s a lot of trust there. When you’re working with a client who you have a long track record with, there’s a lot of trust right off the bat and it makes it a smoother process.”

Hunter also credits the many subcontractors and design professionals who worked on the project with helping to bring it in on time and under budget.

“We couldn’t get the job done without them,” Hunter says. “The success of projects like this often hinges on the performance of the subcontractors we hire to do the work — it’s very important.”

Partners on the project included civil engineering firm TFMoran, of Bedford (“Like Eckman, TFMoran has been working on campus for decades and their experience and knowledge of the campus was really instrumental to the project, as well,” Hunter says); JSN Associates, of Portsmouth; Design Day Mechanicals, of New Ipswich; Hampshire Fire Protection Co., of Londonderry; Longchamps Electric, of Manchester; and Ace Welding, of Merrimack, among others. Since project architects, BHDP Architecture, is based in Cincinnati, Eckman helped with investigating existing conditions and coordination during the design phase.

Funding for the project came in part from a $6 million contribution from Roger and Francine Jean — for whom the complex is named.

“They were very involved from the beginning,” Hunter says. “They recognized the importance a student center like this would have for the college in pursuit of its mission. They were really wonderful to work with. Mr. Jean toured the building several times and was very supportive and complimentary of our work. We were thrilled to successfully deliver this new, beautiful facility with their name on it.”

Shortly after the ribbon cutting in May, the complex again became the focal point of campus life on the Hilltop.

“It’s just a great place for the entire student body to come and hang out,” says student James Bloor ’19. “This is such a modern building now. The amount of work that everyone has really put into making this such a dynamic and fulfilling environment for everybody on campus — I think it’s amazing.”